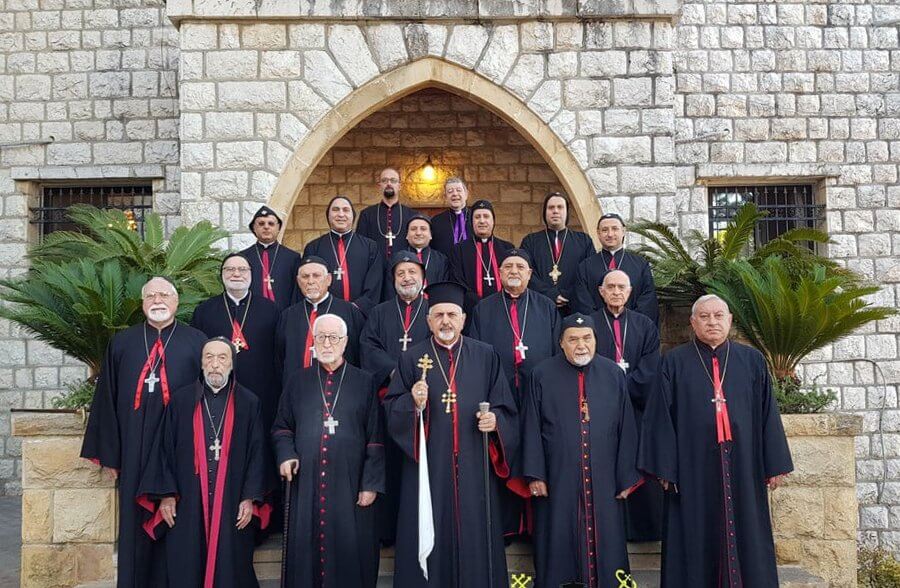 Photo Credit: CNS/Syriac Catholic patriarchate - Syriac Catholic bishops from throughout the world gathered for their synod Sept. 12-19 with Syriac Catholic Patriarch Ignace Joseph III Younan presiding at the patriarchal Monastery of Our Lady of Deliverance near Harissa, Our Lady of Lebanon near Beirut. It was the first synod since 2019 because of the coronavirus pandemic.

Syriac Catholic bishops, meeting in Lebanon for the first time since 2019 because of the pandemic, called on governments in the Middle East to work “to stop wars and renounce the logic of sectarianism and racism.”

In a statement at the conclusion of their Sept. 12-19 synod, with Syriac Catholic Patriarch Ignace Joseph III Younan presiding, the bishops reviewed the “serious challenges faced by Christians in the East, especially immigration due to the political, security and economic conditions.”

The bishops said they studied Dioceses spread in Lebanon, Syria, Iraq, the Arabian Gulf, Jerusalem, Jordan, Egypt and Turkey, “and the calamities that befell them as a result of the various wars and conflicts.”

They said their hearts “were so moved by the many pastoral, cultural, social and spiritual activities that push the children of the church to joy and hope for the future.”

The bishops also thanked the Christian humanitarian charities “that contribute to the reconstruction of what was destroyed by the forces of darkness.”

Regarding “the wounded country of Lebanon,” the Syriac Catholic bishops said they prayed for the country “and its economic, social, health and educational crises.”

Lebanon, which went 13 months without a government, is quickly slipping into a deeper economic crisis that the World Bank labeled as one of the world’s worst since the 1850s.

The bishops called on the new Lebanese government, formed Sept. 10, “to work quickly to alleviate the suffering of the Lebanese people.”

The United Nations has determined that 78 percent of Lebanese now live in poverty, up from less than 30 percent before 2019.

The bishops also called on Lebanon’s government “to work seriously on criminal scrutiny to find out the fate of the Lebanese money and deposits in banks, which were looted.”

For two years now, Lebanon’s banks have imposed a de facto freeze on accounts, limiting withdrawals and forbidding depositors from transferring their own money abroad. The Lebanese currency has lost more than 90 percent of its value, causing salaries to dwindle to barely a tenth of their previous value.

Furthermore, the bishops called on the government to “reveal the truth” about the August 2020 Beirut port blast, which killed more than 200 people, injured more than 6,000, left 300,000 people homeless and shattered lives and livelihoods in Beirut and beyond. There has been no report on accountability for the catastrophe.

In their statement, the Syriac Catholic prelates stressed that Lebanon’s parliamentary elections must occur as scheduled in May “to form a new political class that will rise in Lebanon from its repression.”

The bishops expressed their disappointment that the Syriacs in general and the Syriac Catholic community in particular are not being represented in the newly formed government.

The Syriac Catholic bishops also addressed the situation of churches in the United States, Canada, Australia, Europe and Venezuela, especially following the rise in the number of forcibly displaced Syriacs from their homelands, particularly Syria and Iraq.

The bishops stressed the importance of accompanying the faithful “in their new countries, and taking care of them by providing priests to serve them and establishing churches and cultural, spiritual and social centers that bring them together.”

They called on the faithful who have emigrated “to adhere to their religious, cultural and liturgical roots, and to face the challenge of their assimilation in Western countries.”