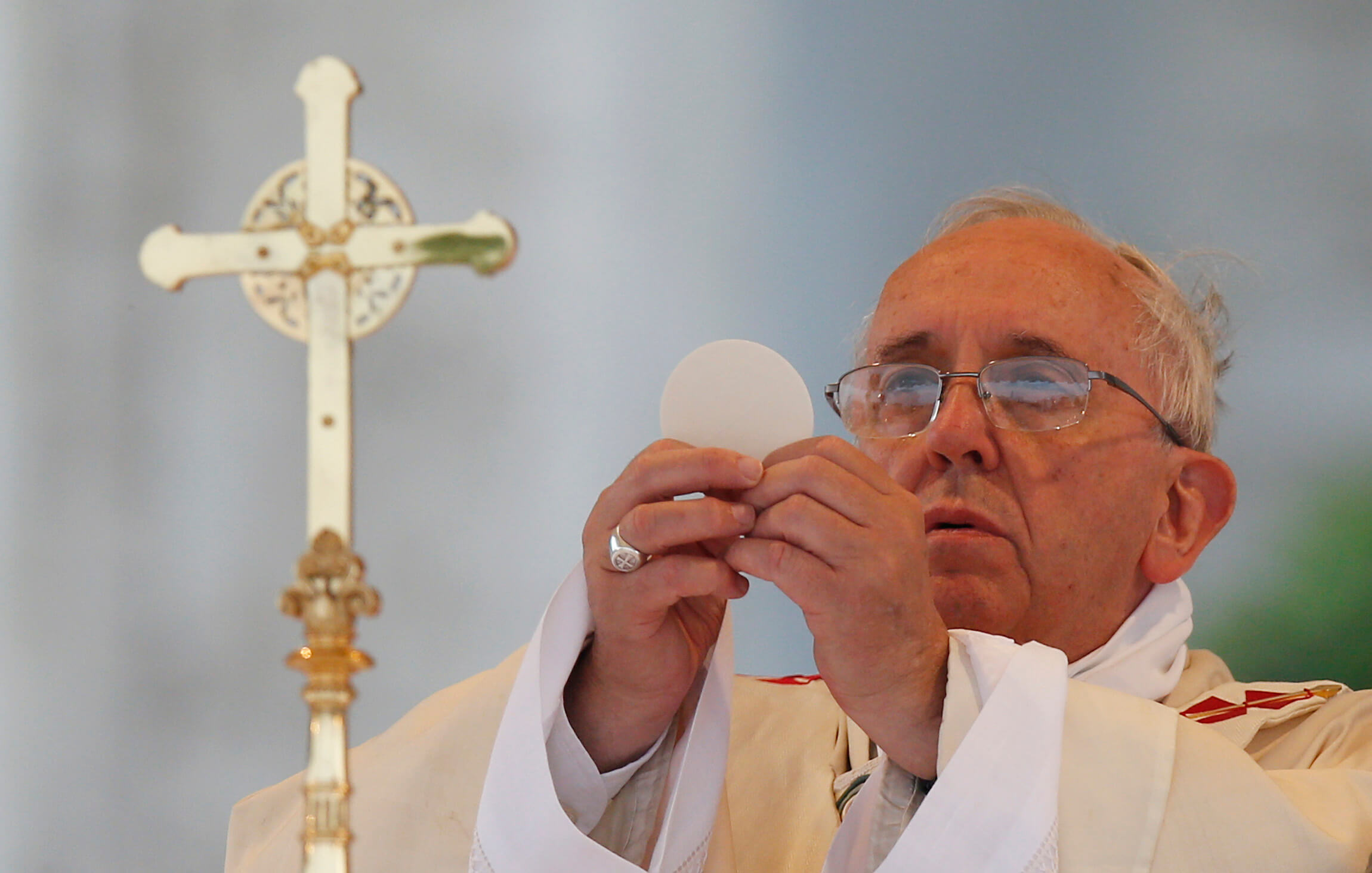 Photo Credit: CNS photo/Paul Haring - In this 2014 file photo, Pope Francis elevates the Eucharist as he celebrates Mass on the feast of Corpus Christi outside the Basilica of St. John Lateran in Rome.

The Real Presence: What do Catholics believe and how Church can respond

Do Catholics believe that the Eucharist is truly the body and blood of Christ?

The findings clearly touched a nerve as commentators jumped to analyze the data, questioning the language that Pew had used in its survey questions.

Mark Gray from the Center for the Applied Research in the Apostolate wrote in a blog post that replacing the word “actually” with “really” might have led to different results. In previous surveys on the Real Presence, CARA used “Jesus is really present in the bread and wine of the Eucharist” vs. “Bread and wine are symbols of Jesus, but Jesus is not really present.”

Others found the results an affirmation of their belief that catechesis in the church is in a sorry state.

“It represents a massive failure — and I include myself in this, we’re all guilty — a massive failure on the part of Catholic educators and catechists, evangelists, teachers,” said Los Angeles Auxiliary Bishop Robert E. Barron in a “Word on Fire” YouTube video. “If on this central matter of our belief and practice there is this much deep misunderstanding, something has gone substantially wrong.”

Pew’s finding “certainly shows a failure in catechetics, but I think the Church faces a greater problem,” Jesuit Father Thomas Reese wrote in a column for Religion News Service. “Catholics have an impoverished idea of what the Eucharist is really about.”

Catholic theologians in the High Middle Ages turned to the Aristotelian philosophic categories of “substance” and “accidents” to expound the doctrine. Today, some argue those terms contribute to the confusion around the Eucharist.

“The accidents are those things that we see. We see a host. We see wine,” explained Father Frank Donio, director of the Catholic Apostolate Center in Washington, in an interview with Catholic News Service. “The substance — the ‘breadness’ or the ‘wineness’ — is what it is.”

By the words of consecration during the Eucharistic Prayer at Mass, the substance changes — transubstantiation — while the accidents remain the same.

“The difficulty is that because we don’t help people to understand what that means, substance and accidents, it’s harder for them to then understand what transubstantiation is,” he added. “We do need to assist people in understanding” those terms.

But do those ancient terms resonate with modern-day Catholics?

“Sometimes we struggle to articulate a post-Enlightenment understanding of what we mean by Real Presence” by relying on outdated vocabulary, said Michael Bayer, director of evangelization and adult formation at St. Clement Church in Chicago.

Father Reese put it bluntly, “Using Aristotelian concepts to explain Catholic mysteries in the 21st century is a fool’s errand.”

It is possible to teach the doctrine of transubstantiation without using the words “substance” and “accidents,” said Timothy O’Malley, professor and director of the Notre Dame Center for Liturgy, in an interview. But eventually it is the appropriate way to teach it, he said.

“If the word ‘substance’ scares people off, you can say, ‘what it really is,’ and that is what substance is,” O’Malley said. “What it really is, what it absolutely is at its heart is Christ’s body and blood.”

“The most helpful thing we can say is: This really, truly, actually is Jesus, in a way that it was not prior to the act of consecration,” Bayer said in an interview. “It truly is Jesus and there’s an aspect to this we simply don’t understand. And we have to be a little comfortable in the face of that mystery.”

O’Malley references St. Thomas Aquinas’ Eucharistic hymn the “Pange Lingua” as an example of language that describes the Eucharist in an accessible way that can prepare Catholics for an appreciation of “substance” and “accidents” later.

He points to the verse that reads: “The Word in flesh makes true bread his flesh with a word; wine becomes the blood of Christ, and if sense is deficient, to confirm sincere hearts, faith alone suffices.”

“It’s about a docility and a submission to an effable mystery. It’s why we celebrate these sacred mysteries at Mass because there’s something we simply cannot communicate,” Bayer said.

“Faith is not purely an intellectual exercise,” Father Donio said. “Reason informs (faith). Faith is that encounter with Christ.”

Look to liturgical practice, what we do in our parishes, O’Malley said. “Are there Eucharistic processions in public ways? Do we engage in practices like benedictions and other dimensions that hold up the Eucharistic sacrament and the gift of this presence?”

Along with incorporating religious practices surrounding the Eucharist, pastors should preach about the doctrine of transubstantiation, especially on the feast of Corpus Christi, O’Malley added.

For Catholic speaker and author Katie Prejean McGrady, Eucharistic adoration has been an essential part of her ministry.

“There’s an opportunity to open people’s hearts and minds to the idea that we get to sit in the presence of Christ. And if this was just bread, then this would be a complete waste of time,” she said in an interview.

In her talks at youth conferences, faculty retreats and other events, she prepares the audience for prayer during Eucharistic adoration.

“We’re sitting in front of Christ himself. What does that do to your heart? What can that do for your mind? How can that bring you calm and comfort? How can that give you the opportunity to discover and to grow?” she said.

McGrady also suggested the churches make adoration chapels available or open church doors during the day so that people can stop in and pray. “The ‘pop-in’ on Jesus was what really enflamed my heart with the love of the Eucharist” during her college years, she said.

Another way to help Catholics interiorize an understanding of the Real Presence is by deepening their relationship to mission.

Receiving Communion at Mass transforms us into living as a Eucharistic people, Bayer said. The Eucharist “missions us outward for the work of the Gospel during the week.”

“To live as a Eucharistic people, to receive Jesus’ body, requires us to get down and wash feet. We must serve, that’s how we express it,” Bayer said.

What the Pew survey has done — accurate or not — is spark conversation and critical thinking among Catholics leaders, educators and catechists on the best way to lead believers to a deeper understanding of the Eucharist.

“How do we take advantage of this conversation to help people encounter Christ more deeply in the Eucharist?” Father Donio said.