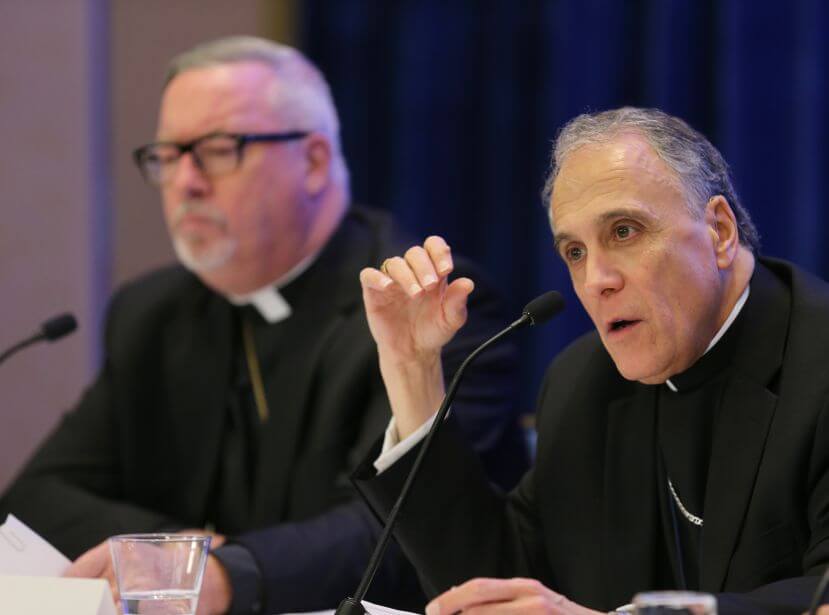 Photo Credit: CNS photo/Bob Roller - Bishop Christopher J. Coyne of Burlington, looks on as Cardinal Daniel N. DiNardo of Galveston-Houston, president of the U.S. Conference of Catholic Bishops, responds to a reporter's question during a Nov. 13 news conference at the bishops' fall general assembly in Baltimore. Less than two weeks later, the cardinal said the bombing of a mosque in Egypt's North Sinai region was a "monstrous terrorist attack on innocent people at prayer."

The president of the U.S. Conference of Catholic Bishops condemned the Nov. 24 bombing of a mosque in Egypt’s North Sinai region, calling it a “monstrous terrorist attack on innocent people at prayer.”

“Terrorist acts can never be justified in the name of God or any political ideology, and the fact this attack took place at a mosque, a place of worship, is especially offensive to God,” said Cardinal Daniel N. DiNardo of Galveston-Houston.

Reports indicate that militants killed more than 300 people at a mosque by detonating a bomb and gunning down worshippers. At least 128 others were injured in what is being described as the deadliest modern-day attack in Egypt’s history.

“The Catholic Church in the United States mourns with the people of Egypt at this time of tragedy, and assures them of our prayerful solidarity,” Cardinal DiNardo said in a statement.

“We join with all those of goodwill in prayer that these acts of terror and mass killings — these acts of grave evil — will end and will be replaced with genuine and mutual respect for the dignity of each and every person,” he said.

The attack took place at the Al Rawdah mosque in Bir al-Abed, west of El Arish, the main city in North Sinai.

Reuters reported that witnesses said that “worshippers were finishing Friday prayers at the mosque when a bomb exploded. … Around 40 gunmen set up positions outside the mosque with jeeps and opened fire from different directions as people tried to escape.”

In a televised address, Egyptian President Abdel-Fattah el-Sissi said the attack was “an attempt to stop us from our efforts in the fight against terrorism, to destroy our efforts to stop the terrible criminal plan that aims to destroy what is left of our region.”