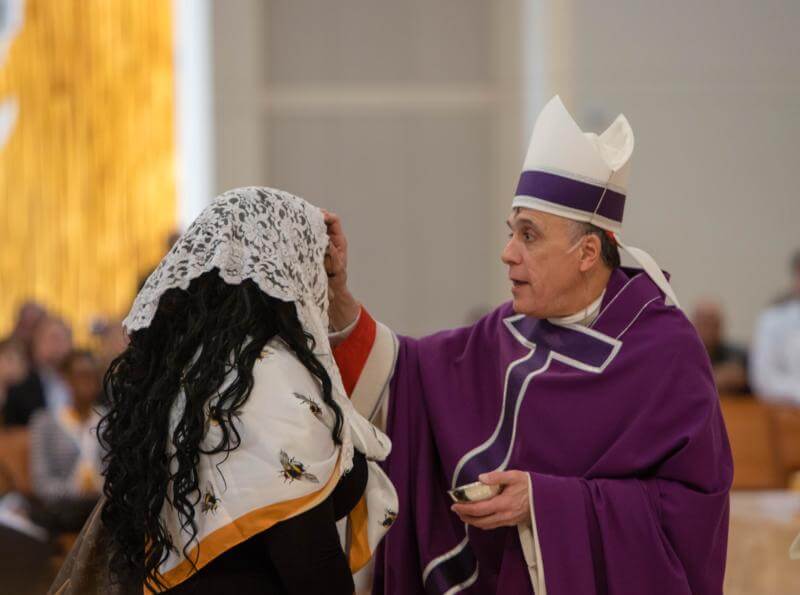 Photo Credit: (CNS photo/James Ramos, Texas Catholic Herald) - Cardinal Daniel N. DiNardo of Galveston-Houston marks a woman's forehead with a cross during Ash Wednesday Mass Feb. 14 at the Co-Cathedral of the Sacred Heart in Houston. Cardinal DiNardo is president of the U.S. Conference of Catholic Bishops.

The president of the U.S. Conference of Catholic Bishops said he is grateful to  Pope Francis for “his powerful, straightforward words” in “Gaudete et Exsultate” (“Rejoice and Be Glad”), his apostolic exhortation on “the call to holiness in today’s world.”

“Pope Francis is very clear,” said Cardinal Daniel N. DiNardo of Galveston-Houston. “He is doing his duty as the vicar of Christ, by strongly urging each and every Christian to freely, and without any qualifications, acknowledge and be open to what God wants them to be — that is ‘to be holy, as he is holy’ (1 Pet 1:15).

“The mission entrusted to each of us in the waters of baptism was simple — by God’s grace and power, we are called to become saints,” the cardinal added in a statement April 9, the day the Vatican released the document.

All Christians are called to be saints, not “plastic statues of saints,” the pope wrote, but real people who make time for prayer and who show loving care for others in the simplest gestures.

“Do not be afraid of holiness. It will take away none of your energy, vitality or joy,” the pope said in his apostolic exhortation, which he signed March 19, the feast of St. Joseph.

Pope Francis is calling each Christian to “acknowledge and be open to what God wants them to be,” Cardinal DiNardo said.

He said the words from the document that jumped out at him when he first read them were: “Do not be afraid of holiness.”

“In a way, each one of us has a fear of striving for holiness — a fear that we would be mocked, ignored, or even hated by others because we would stand out,” Cardinal DiNardo said in his statement. “Yet that is what the Lord has called each and every person to! Pope Francis calls us out: A Christian cannot think of his or her mission on earth without seeing it as a path of holiness, for ‘this is the will of God, your sanctification.'”

Pope Francis “describes how holiness comes through the daily struggles each of us face,” the cardinal said. “In the ordinary course of each day, the pope reminds us, ‘We need to recognize and combat our aggressive and selfish inclinations, and not let them take root.’ Yet, he says, this ‘battle is sweet, for it allows us to rejoice each time the Lord triumphs in our lives.'”

Cardinal DiNardo also pointed in particular to a paragraph that discusses “the continuing need we have for civility in all our interactions, especially in the media.”

“‘Christians too,’ the Holy Father writes, ‘can be caught up in networks of verbal violence through the internet and the various forums of digital communication,'” the cardinal said, quoting from the exhortation. “This can be true even in Catholic media. Even in our heated disagreements with one another, we always need to remember that it is God who judges, not man (James 4:12).'”

The cardinal encouraged all Christians, in celebrating the joy of Easter and Christ’s resurrection, to “rekindle their baptismal call” by reading “Gaudete et Exsultate,” especially “the beautiful section on the beatitudes.”

By exploring the Eight Beatitudes and “offering examples of how to live out our call to holiness in everyday life, the Holy Father has given us a wonderful tool for renewing our love for God and for each other,” Cardinal DiNardo added.

Reaction to the pope’s new document from around the U.S. included a reflection from New Jersey Bishop David M. O’Connell of Trenton.

“The pope cautions the reader that this document ‘is not meant to be a treatise’ or an academic, doctrinal text,” the bishop said. “It is proposed and intended to be a personal, pastoral and practical invitation to each and every one of us in the church to draw closer to the Lord Jesus Christ in our everyday lives.”

“This exhortation … however, speaks in simple, accessible language in an attempt to redirect our attention to the everyday ‘holiness’ that we are called to live,” he said.

Bishop O’Connell opens his reflection with a description of the mosaic of “Christ in Majesty” that adorns the apse behind and above the high altar of the Great Upper Church of the Basilica of the National Shrine of the Immaculate Conception in Washington.

“If you turn around to look back at the narthex, you will see a white bas relief that stretches from side to side across the back of the shrine. The artist labeled his work, ‘The Universal Call to Holiness,'” he said. “But, just what is a ‘universal call to holiness?’ What does it mean?” Pope Francis answers these questions in his new document, Bishop O’Connell said.

“As the pope says in the exhortation, ‘We are all called to be holy by living our lives and by bearing witness in everything we do, wherever we find ourselves,'” he added.