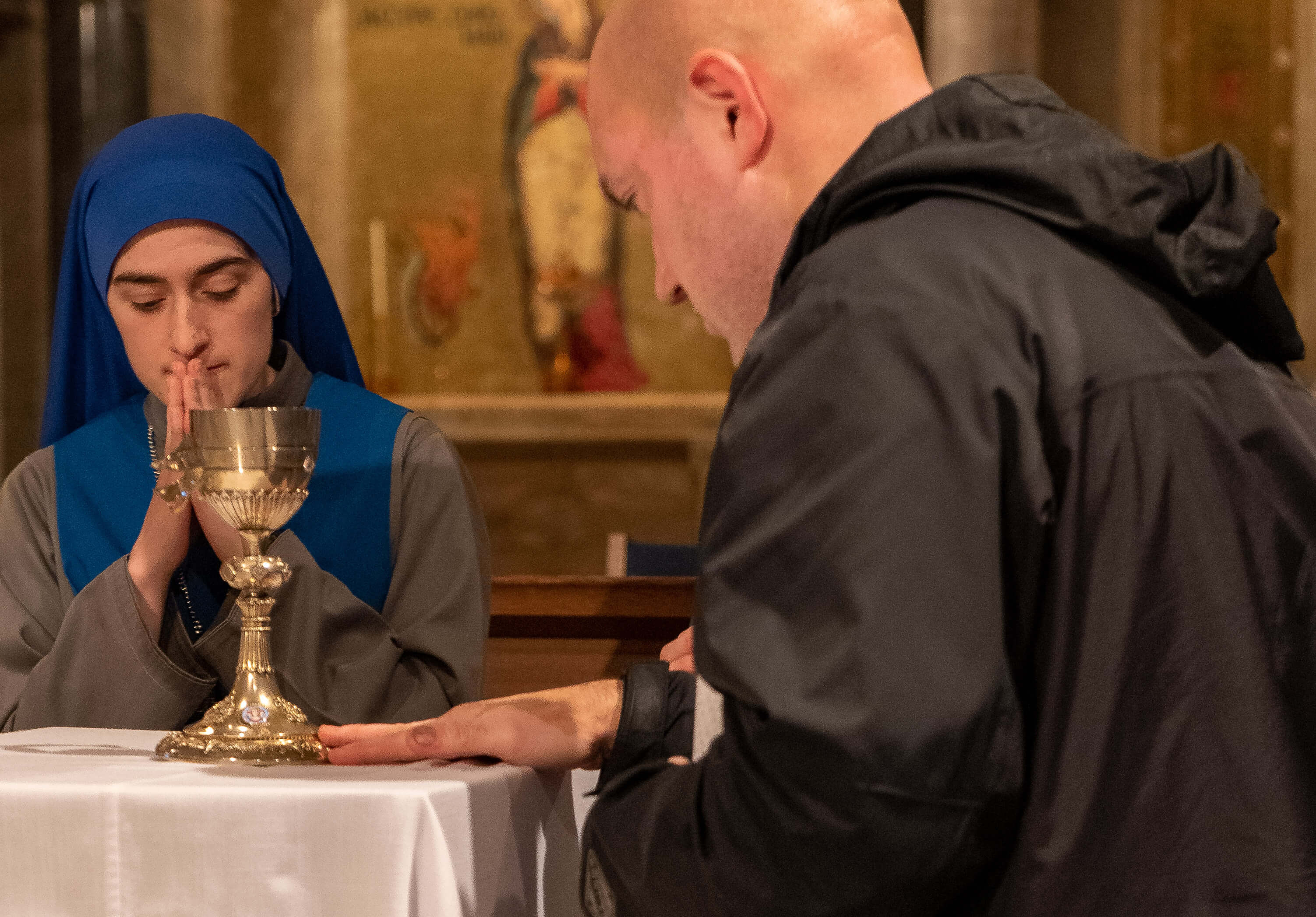 Photo Credit: CNS/Deirdre Mcquade, courtesy Aid to the Church in Need - A woman religious and a man religious pray over a chalice during a vespers service for Christian martyrs in the crypt church of the the Basilica of the National Shrine of the Immaculate Conception in Washington, D.C. The chalice from a Catholic parish in Qaraqosh, in the Nineveh Plains of Iraq, was scarred by the bullets of Islamic State militants.

Victims of Christian persecution remembered at ‘Night of Witness’ service

A chalice from a Catholic parish in Qaraqosh, in the Nineveh Plains of Iraq, scarred by bullets from Islamic State militants was a mute witness at a vespers service for Christian martyrs.

The Nov. 23 observance at the Basilica of the National Shrine of the Immaculate Conception in Washington gave a voice to those who have died from religious persecution during the past two years, mostly in the Middle East, South Asia and African nations where Christians are in the minority. Candles were lit as their names were read.

“Many of these victims suffer and perish anonymously,” said George Marlin, chairman of Aid to the Church in Need-USA, the charity sponsoring the service.

The exterior of the basilica was bathed in red light to symbolize the color of martyrdom, and Archbishop Christophe Pierre, apostolic nuncio to the United States, presided. The vespers marked the end of the charity’s Courage in Red campaign.

Testimonies focused on the heartbreak of survivors of violence.

Oblate Father Romeo Saniel of the Philippines recalled his spiritual struggle as he consoled survivors after a pair of suicide bombers attacked the Cathedral of Our Lady of Mount Carmel Jan. 27. They killed 22 at Sunday Mass and injured more than 100 others; an IS-affiliated group claimed responsibility.

“I did not know what to say at the time,” he said. “I just embraced and cried with her.”

He finally composed himself enough to tell her, “Rose, Jesus will never abandon us.”

In the immediate aftermath of the attack, “I was paralyzed by fear,” he said, but later “I realized the Lord saved me for a reason.”

“The blood of martyrs inspires us to live for the Lord and His Kingdom,” he concluded.

A testimony from Sister Ghazia Akbar, a Daughter of St. Paul, who has fought religious oppression in Pakistan, was read by Valencia Camp, who works for the basilica and is a lieutenant of the Equestrian Order of the Holy Sepulchre of Jerusalem.

Christians there, facing persecution, often are given only “demeaning, back-breaking menial jobs,” the testimony said. Those who speak up against the status quo face a high price,” including running afoul of blasphemy laws, which can lead to long prison terms or even death.

Franciscan Father Neville Fernando of Sri Lanka survived the Easter bombing that killed more than 100 Mass attendees at St. Sebastian Church in the fishing village of Negombo. Even while stunned by the blast, he did his best to administer last rites and comfort survivors.

The question on everyone’s lips, he recalled, was, “How could God allow this to happen?”

But he eventually found encouragement in the aftermath: “The people who have suffered the most have shown the most faith and courage.”

Aid to the Church in Need’s new biennial report on Christian persecution, which assessed conditions in 12 countries throughout Africa and Asia, credits only Iraq for improving conditions for Christian refugees returning to their homes after they fled the Islamic State group.

But significant challenges remain there, the report states. “The process of return has been complicated by security problems, with accusations of aggression, including land grabs by militias allegedly protecting Christian settlements.”

In Sri Lanka, where that country’s civil war ended in 2009, new threats against Christians have originated with Sinhalese Buddhist nationalists as well as Hindu extremist groups.

In the Philippines, the report cites President Rodrigo Duterte’s antagonism to the Catholic Church during his time in office, and mentions that a number of priests have been shot by unknown assailants.