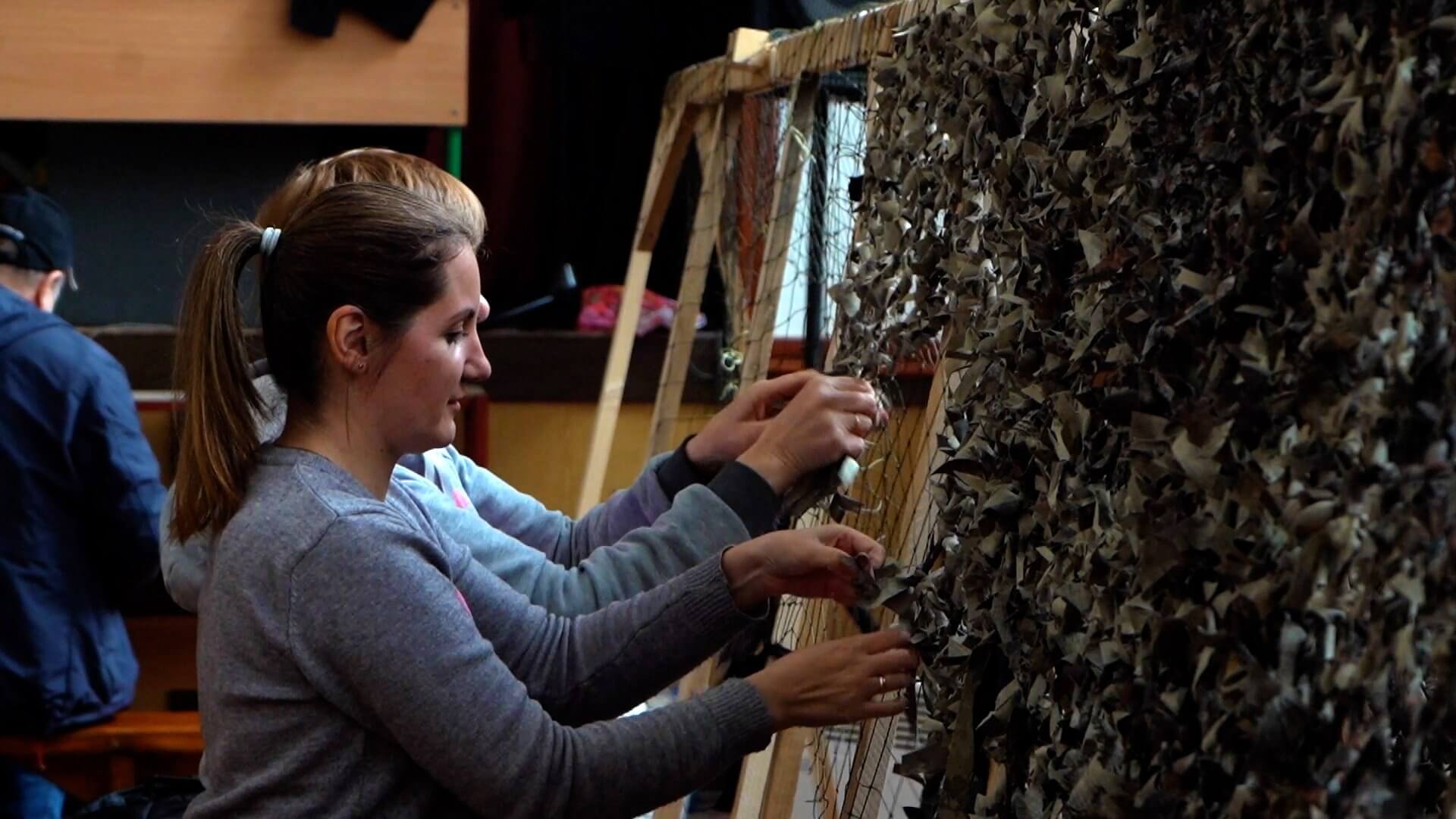 Photo Credit: CNS/Voznyak Production - Women weave pieces of fabric into camouflage netting for the Ukrainian military April 19 in the basement of the Church of Christ the King in Ivano-Frankivsk, Ukraine.

In the basement of a church in western Ukraine, far from the most ferocious Russian attacks, residents and displaced people contribute to the war effort by weaving camouflage nets, baking vareniki dumplings and making rosaries.

“We’re not just weaving good luck charms for the guys; we are weaving the country together,” said Lyudmila, who fled the battered Kharkiv region and now weaves camouflage netting for the Ukrainian military.

Sitting in front of a wood frame where she threads green, khaki and brown scraps of fabric around plastic netting to shield military vehicles and positions, Lyudmila said she and the other volunteers put their hearts and their longing for their hometowns into each motion.

Father Mykyta Ovchar, one of the Incarnate Word priests at the Church of Christ the King in Ivano-Frankivsk, said, “When our nation is at war, we cannot just stand by.”

While the soldiers take up weapons, he said, others take up prayer, which is one reason why rosary making is one of the projects locals and displaced people are engaged in.

Oleksiy, who also fled from the Kharkiv region where he worked at the Institute of Animal Husbandry, cuts and snips the fabric the women use to weave through the netting.

“Our houses and industrial buildings have been destroyed by shelling by Russian troops,” he said, but the people of Ivano-Frankivsk have been welcoming and helping with the nets lets him work with his hands and contribute to the defense of his country.

He said he hopes to return home one day soon, but so much of what existed in eastern Ukraine has been destroyed.

“It doesn’t make much sense,” he said. “These are the apartments of peaceful citizens, which do not have any military function.”

Irina volunteers making vareniki, the traditional dumplings, which are packed in boxes and delivered to the troops.

“We hope that this will somehow lift their spirits, their fighting spirit, knowing that they are cared about,” she said.

As they bake, or cut fabric, or weave nets or string rosary beads, the volunteers also find camaraderie in the church basement.

They drink tea and sing Ukrainian folk songs or hymns.

“We are united, and we believe that our love, our warmth will bring us closer to victory,” Lyudmila said.