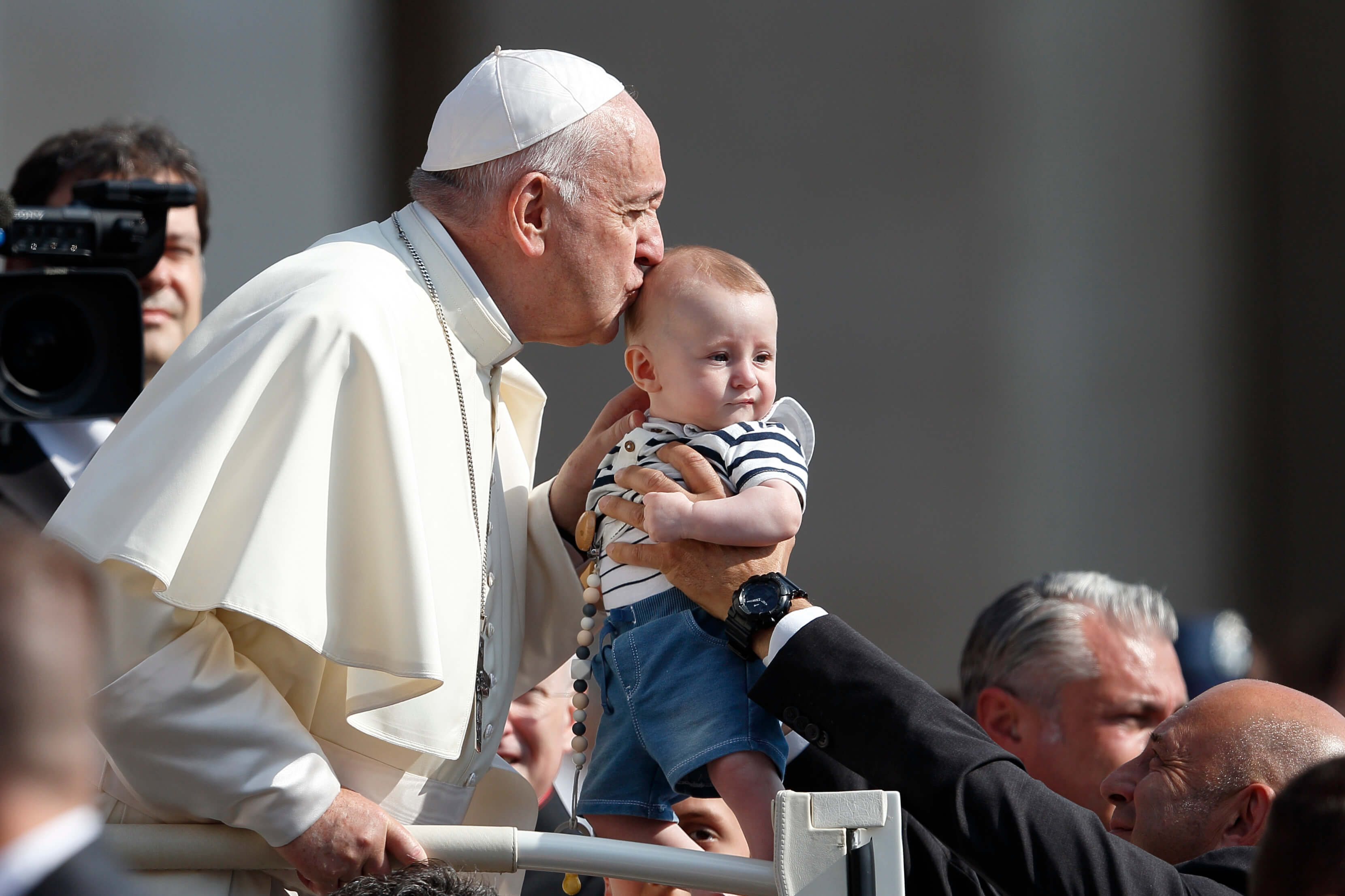 Photo Credit: CNS/Paul Haring - Pope Francis kisses a baby during his general audience in St. Peter's Square at the Vatican.

People need to walk together in harmony to build a more fraternal world, Pope Francis said, reflecting upon his recent trip to Romania.

The May 31-June 2 trip showed the important need “to walk together, both for Christians” when it comes to faith and charity, and for residents of a nation, when it comes to civic engagement, he said June 5 during his weekly general audience in St. Peter’s Square.

As is customary, Pope Francis reviewed his trip to the predominantly Orthodox East European nation during his first general audience after the trip.

Yet he also used the audience to remind people to take part in the “One Minute for Peace” initiative June 8. The day marks the fifth anniversary of the pope’s historic gathering at the Vatican with Israeli President Shimon Peres, Palestinian President Mahmoud Abbas and Orthodox Ecumenical Patriarch Bartholomew of Constantinople, and their “invocation for peace.”

Every year since that meeting in 2014, the International Forum of Catholic Action has promoted “One Minute for Peace” every June 8 at 1 p.m. The pope said people of faith are invited to pray for and people with no religious belief are invited to reflect on “a more fraternal world.”

In his main audience talk reviewing his trip to Romania, the pope noted his encounter with Romanian Orthodox Patriarch Daniel and the Permanent Synod of the Romanian Orthodox Church, where he reiterated “the desire of the Catholic Church to walk together in reconciled memory and toward full unity.”

“This important ecumenical dimension of the trip culminated in the solemn prayer of the Our Father,” showing that “unity does not eliminate legitimate diversity.”

The Lord’s Prayer represents the “common heritage of all baptized. No one can say ‘my Father’ and ‘your Father.’ No, ‘our Father,'” he said.

The pope recalled the many moments of prayer and celebration with the minority Catholic communities, including the beatification of seven bishop-martyrs of the Eastern-rite Romanian Catholic Church, who died during a fierce anti-religious campaign waged under the communist regime in Romania.

The martyred bishops gave witness to “the freedom and mercy that come from the Gospel,” the pope said at the general audience.

The pope also highlighted his visit with the Roma community in Blaj, saying he wanted to greet them and renew his appeal “against all discrimination and for the respect of people of every ethnicity, language and religion.”