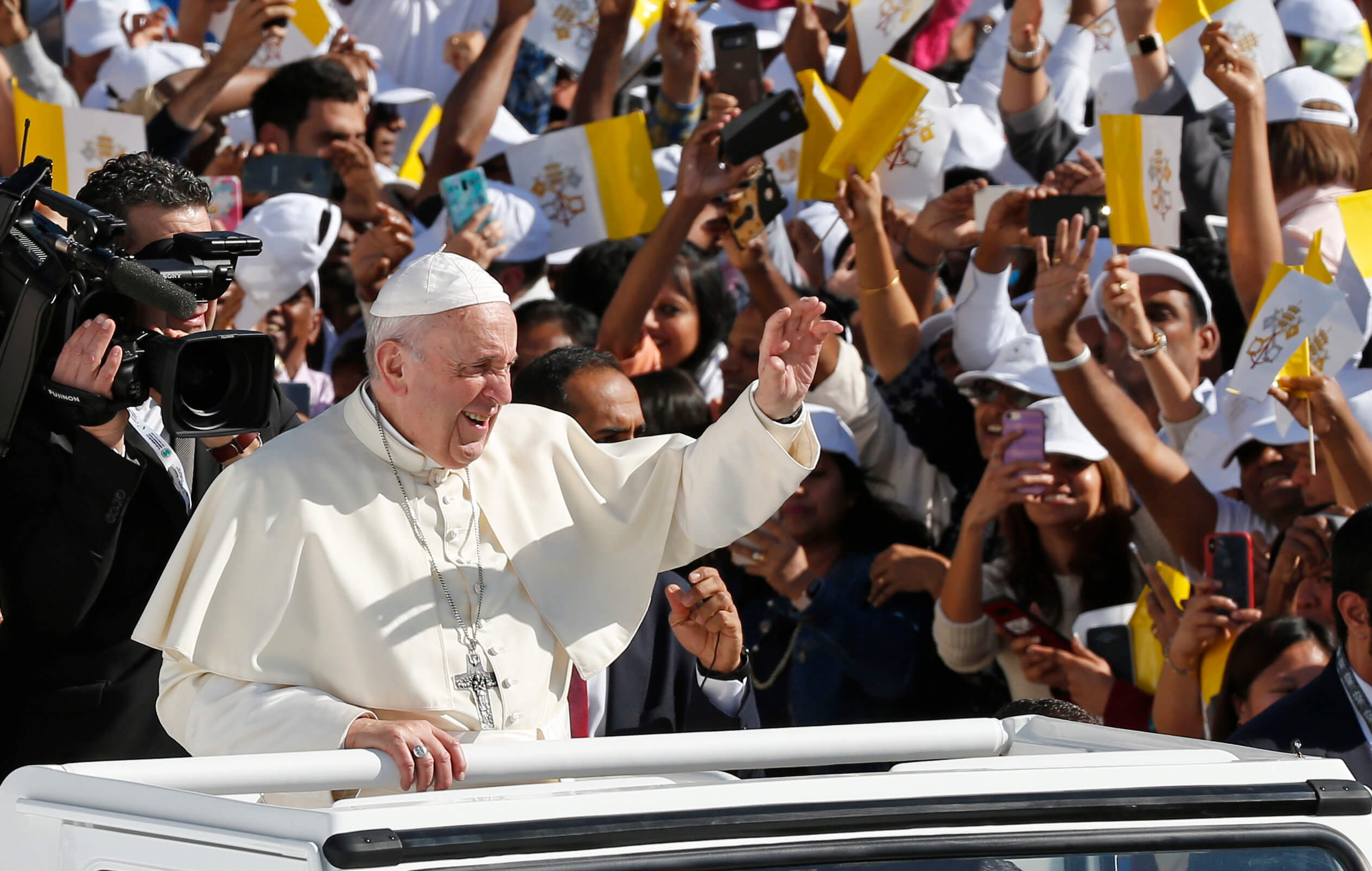 Meeting with tens of thousands of Catholics living in the United Arab Emirates, Pope Francis urged them to be meek, peaceful and express their Christian identity by loving others.

The UAE Catholic community, which numbers close to 1 million, includes foreign workers from roughly 100 nations, but particularly India and the Philippines. They filled the stadium at Abu Dhabi’s Zayed Sports City and the open spaces around the complex for Pope Francis’ Mass Feb. 5.

“We are very happy; it’s a historic moment,” said Matthew, who came from India five years ago and is involved with the “outreach ministry” of St. Paul’s Church, visiting the sick in local hospitals.

The United Arab Emirates is officially Muslim, but it allows members of other faiths to worship according to their beliefs. The Muslim dignitaries at the Mass were led by Sheik Nahyan bin Mubarak Al Nahyan, the government minister of tolerance.

In his homily, Pope Francis told the Catholics, “I like to quote St. Francis, when he gave his brothers instructions about approaching the Saracens and non-Christians. He wrote: ‘Let them not get into arguments or disagreements, but be subject to every human creature out of love for God, and let them profess that they are Christians.'”

So “neither arguments nor disagreements” are called for, the pope said. In the 13th century “as many people were setting out, heavily armed” to fight in the Crusades, “St. Francis pointed out that Christians set out armed only with their humble faith and concrete love.”

“Meekness is important,” the pope said. “If we live in the world according to the ways of God, we will become channels of his presence; otherwise, we will not bear fruit.”

The prayers of the faithful for the Mass were written in six languages: Korean, French, Urdu, Filipino, Konkani and Malayam.

The prayer in Filipino, acknowledging how many foreign workers come to the UAE without their families, asked God to accompany “all the migrants and workers who live in these lands; may their sacrifice and diligence blossom into goodness and sustenance for their families.”

The French prayer asked God to convert “the hearts of sinners and of the violent; stop the wars, defeat hatred, help us weave bonds of justice and peace.”

The Gospel reading for the Mass was the Beatitudes from the Gospel of Matthew. Pope Francis told the people that the Gospel message was for them and could be summarized as: “If you are with Jesus, if you love to listen to his word as the disciples of that time did, if you try to live out this word every day, then you are blessed. Not you will be blessed, but you are blessed.”

Many people today, he said, think that being blessed means being comfortable and having wealth. But Jesus showed another way. For him, “blessed are the poor, the meek, those who remain just even at the cost of appearing in a bad light, those who are persecuted.”

Jesus was “poor in respect to things, but wealthy in love; he healed so many lives, but did not spare his own,” the pope said. “He came to serve and not to be served; he taught us that greatness is not found in having but rather in giving.”

Through his meekness, humility and self-giving, the pope said, “Jesus brought God’s love into the world. Only in this way did he defeat death, sin, fear and even worldliness: only by the power of divine love.”

The beatitudes, he said, are “a road map for our life: they do not require superhuman actions, but rather the imitation of Jesus in our everyday life.”

“The Beatitudes are not for supermen, but for those who face up to the challenges and trials of each day,” he said.