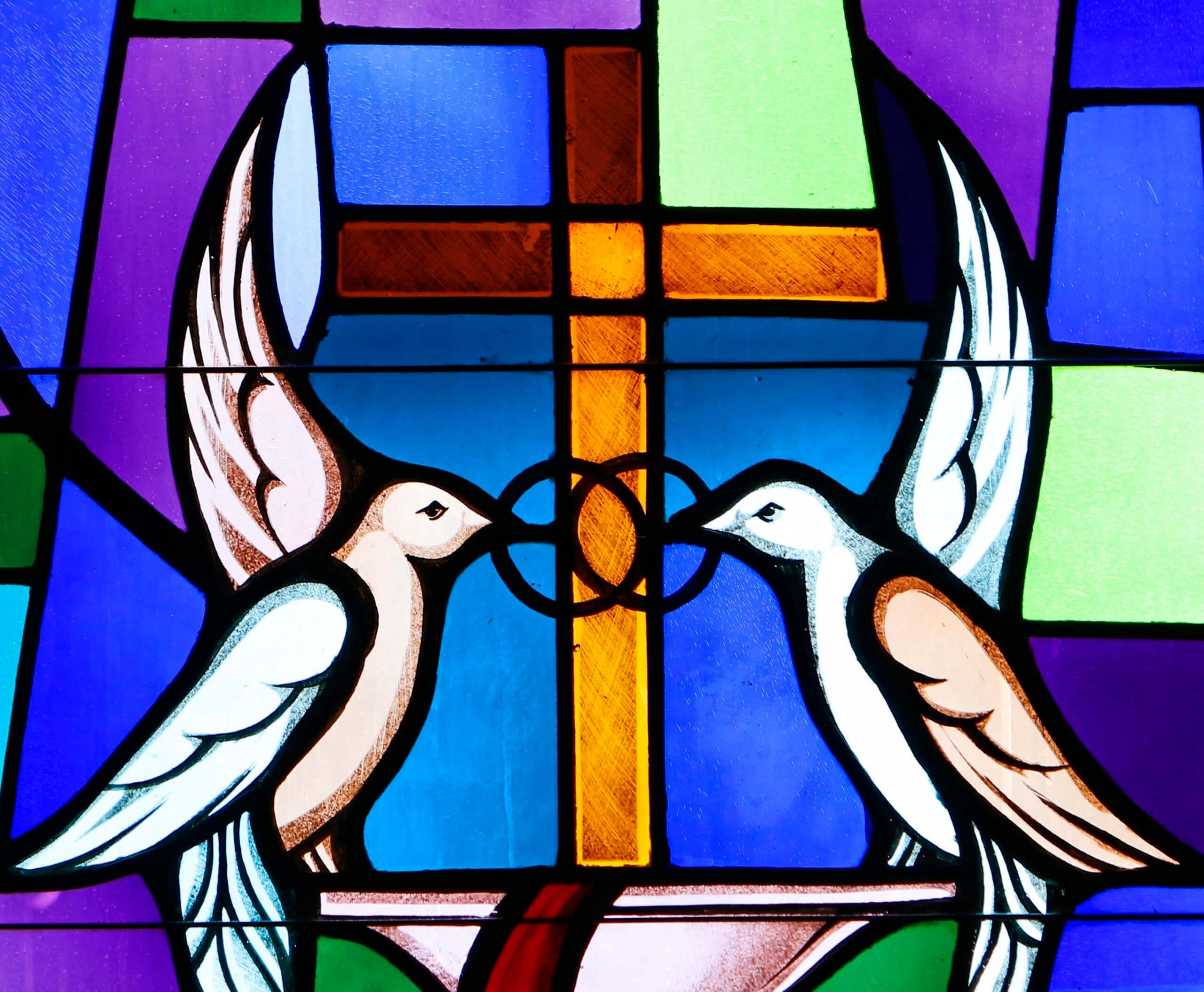 Photo Credit: CNS/Gregory A. Shemitz - Doves and interlocking wedding bands symbolizing the sacrament of marriage are depicted in a stained-glass window. World Marriage Day, observed annually on the second Sunday of February, is celebrated Feb. 14 in 2021.

This year, World Marriage Day, observed annually on the second Sunday of February, will be celebrated Feb. 14, which also is the feast of St. Valentine and which since the eighth century has been a celebration of love and affection.

In the United States, National Marriage Week leads up to World Marriage Day and this year’s theme for the weeklong observance, which began Feb. 7, is “To Have, To Hold, To Honor.”

The theme was chosen “to highlight how married couples live and renew their wedding promises daily in the building up of the domestic church in their homes, particularly as many couples and families have spent more time at home together this year,” said a news release from the U.S. Conference of Catholic Bishops.

Each year, the week provides “an opportunity for the Catholic Church to focus on building a culture of life and love that begins with supporting and promoting marriage and the family,” the release said, adding that the week also “is a great prompt for everyone to reflect on the gift marriage is to our church and our country, as well as an opportunity for couples to build up their own marriages.”

Two events during the week will be livestreamed on the USCCB’s Facebook page: a rosary for married and engaged couples Feb. 10 at 2 p.m. led by San Francisco Archbishop Salvatore J. Cordileone of San Francisco, chairman of the USCCB’s Committee on Laity, Marriage, Family Life and Youth; and a conversation about St. Joseph as a model of fatherhood and spousal love Feb. 12 at 2 p.m.

The USCCB offers resources to Catholics for the promotion and defense of marriage as a lifelong union of one man and one woman through its dedicated websites ForYourMarriage.org, PorTuMatrimonio.org, and MarriageUniqueForAReason.org.

The conference also provides resources to dioceses for National Marriage Week, including a preaching aid for priests, bulletin insert or flyer for parish bulletins, prayer intentions, and a seven-day at-home marriage retreat for married couples, available in English and Spanish. These resources are available for download at ForYourMarriage.org/celebrate-national-marriage-week.

World Marriage Day was started in 1983 by Worldwide Marriage Encounter.

National Marriage Week USA — which has its own website, nationalmarriageweekusa.org — was launched in 2010 as part of an international event meant to “mobilize individuals, organizations and businesses in a common purpose to strengthen marriage in communities and influence the culture,” according to the USCCB.