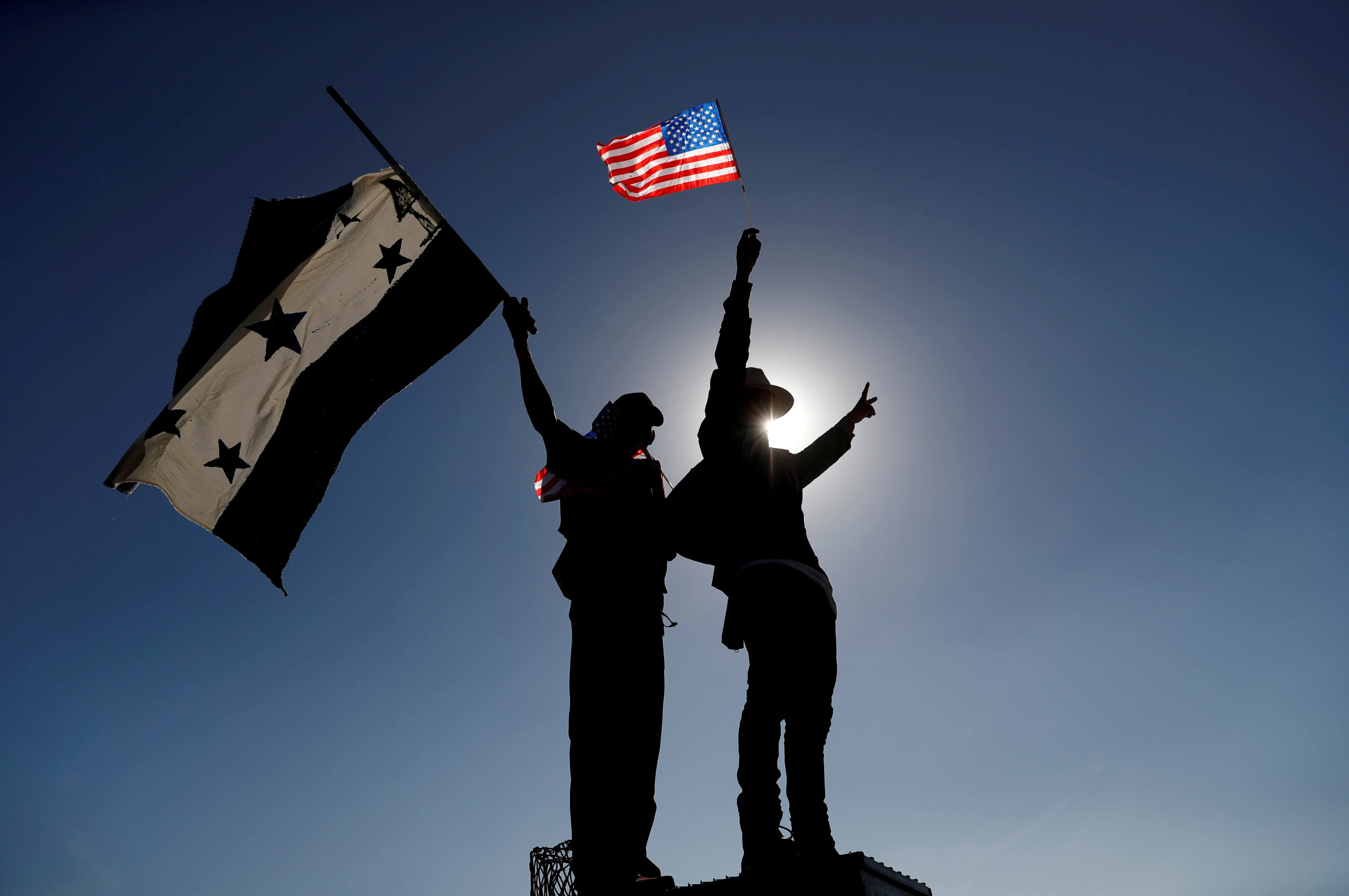 Photo Credit: CNS/Kim Kyung-Hoon, Reuters - Migrants, part of a caravan of thousands traveling from Central America en route to the United States, hold flags of Honduras and the U.S. in Tijuana, Mexico, in front of a wall at the U.S.-Mexico border. As concerns about the caravan rise, Bishop James A. Tamayo of Laredo, Texas, and other Texas bishops urged church leaders and lay faithful to extend respect and compassion for migrants and all who come to Catholic churches in need.

Laredo’s Bishop James A. Tamayo is calling Church leaders and lay faithful to “extend the compassion of Christ” to those who come to Catholic churches in need.

Bishop Tamayo leads the youngest Diocese in Texas and the U.S. The south Texas city of Laredo borders the Mexican city of Nuevo Laredo, and local Catholic leaders are “preparing to help in any way … should the caravan come to our doorsteps,” he said.

His comments come as tensions with tear gas and violence rise on the far west part of the U.S.-Mexico border in Baja California. Thousands of people with a caravan from Central America began arriving in Tijuana, Mexico, Nov. 13, and more continue to arrive.

Bishop Tamayo said his diocesan and social services staff have met with local and national border officials to ensure that the position of the Catholic Church on immigration is known.

The government knows of the Church’s respect of the nation’s laws, he said, “but also of our desire if some (migrants) come in need of health care, if some come to try to reunite with family members, we want to help them through the legal process or if they’re at our door and they need food, they need medical care and attention, they want to tell their story and seek asylum from violence and from the governmental structures of their own country, they should be heard.”

Respect is key to the process of dialogue with local and national officials, Bishop Tamayo told the Texas Catholic Herald, newspaper of the Archdiocese of Galveston-Houston.

“We need to respect them because they have policies and guidelines,” he continued. “When we can tell them we know what you must do or what your policies state, we need to help you to see where the church stands too. We respect all of that but in turn we ask you to come to know us. Our Church is composed of the people of the community.”

Bishop Tamayo said Church leaders tell border officials that “as you stand at the border following your law of safeguarding the frontier, we stand too at a border to see that everyone that comes, knocks, that travels across or desires to travel across is respected, is assisted with their questions, their concerns, their immediate needs.”

Still, with this “there is a spirit of collaboration,” he said.

In Brownsville, Bishop Daniel E. Flores has directly dealt with the federal government.

At a recent lecture in Houston, Bishop Flores described the U.S. government’s attempt to survey land owned by the Diocese of Brownsville with goals to eventually build a wall there. While he denied the request and the government has since filed suit, Bishop Flores said he had several “amicable discussions” with federal officials.

“I have great respect for border security agents,” he said. “I know many of them personally. Still, I decided not to consent to this request on the grounds that it limits the freedom of the Church and is a counter-sign to her mission.”

A border wall is not an intrinsic evil, but it is a prudential social disaster, according to Bishop Flores.

“I am a realist,” he said. “The government has virtually unlimited resources, the Diocese of Brownsville does not. If in the end the wall is not built on our property, then we have defended our principled position; but, if in the end the barrier is built; it will not be because the Church signed a permission. This, would, in fact, speak for itself.”

Of the caravan of asylum seekers, Bishop Flores said that “to seek asylum at terrible moments of life is a human right recognized by the laws of the United States as well as of the Republic of Mexico. To ask for asylum is not a crime, and ought to be an orderly process and proceed in a way respecting the laws of each nation.”

“Ours is the poverty of a discourse that is governed by mutually exclusive and insufficiently nuanced narratives,” he said. “This is abundantly evident in the current discussion about the ‘caravan.’ Are they a band of marauders, or are they the poor fleeing from marauders? Realistically, I have little reason to doubt that criminal elements infiltrate caravans of immigrants who are in the great majority the poor, who are themselves fleeing from criminal elements controlling vast parts of their native countries.”

But there are “just ways” governments can collaborate on to differentiate people and families escaping from “humanly intolerable circumstances” and those “criminal elements that seek to infiltrate and manipulate the vulnerable condition of the immigrant.”