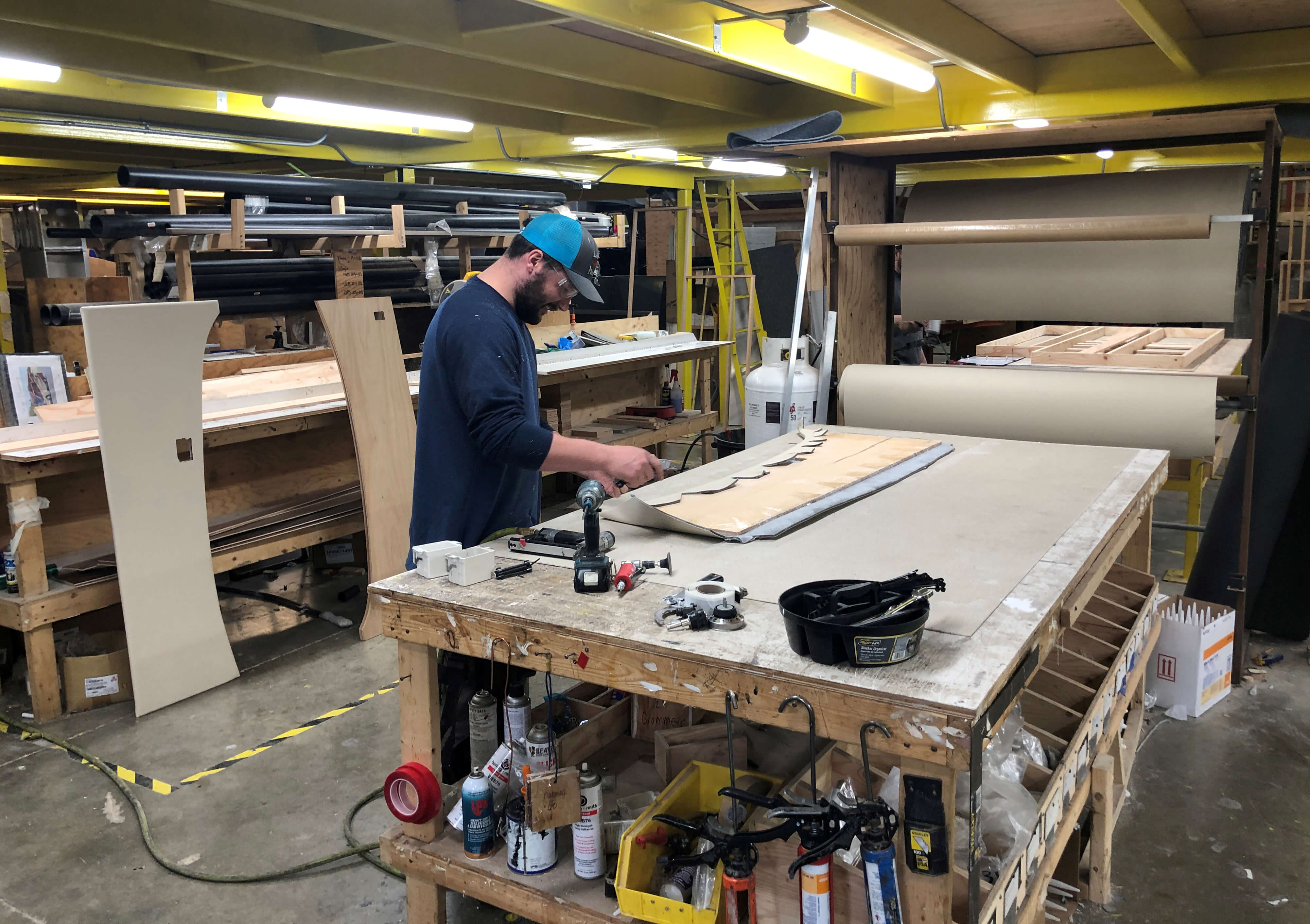 Photo Credit: CNS/Tim Aeppel, Reuters - An assembly line worker is seen at Renegade RV in Bristol, Indiana. The need to ensure worker rights and adequate wages remains as vital in today's society as it was a century ago, Bishop Frank J. Dewane of Venice, Florida., chairman of the U.S. bishops' Committee on Domestic Justice and Human Development, said in a Labor Day message.

The 1919 “Bishops’ Program for Social Reconstruction” was showcased in this year’s Labor Day statement to demonstrate how so many of the issues the bishops touched upon a century ago in the wake of World War I’s end still resonate in improving the conditions of workers today.

“It is worth revisiting the ‘Bishops’ Program,’ which presented three themes from Catholic social teaching,” said Bishop Frank J. Dewane of Venice, Florida, chairman of the U.S. bishops’ Committee on Domestic Justice and Human Development, in the statement.

The three themes Bishop Dewane highlighted were “subsidiarity, monopoly power and wage suppression;” “the universal destination of goods and employee ownership;” and “solidarity and unions.”

Titled “On the Hundredth Year of the United States Bishops’ Program of Social Reconstruction,” the message, dated Sept. 2, was released Aug. 28.

“Today’s economy, if measured by the stock market, has the most money and wealth it has ever had, and unemployment is around the lowest it has been in 50 years. And yet, roughly four in 10 Americans cannot afford an unexpected $400 bill, and would fall below the poverty line after three months without income,” Bishop Dewane said.

The bishops in 1919 dedicated an entire section of their program to “Abolition and Control of Monopolies,” Bishop Dewane said. There, they said, “Human beings cannot be trusted with the immense opportunities for oppression and extortion that go with the possession of monopoly power.”

Bishop Dewane added, “The bishops have highlighted the problem of over-concentrated ownership in the context of farming, noting that although prices for food go down, it has led owners to ‘underpay farm workers, and oppose farmworker unionization.'”

Moreover, “fewer numbers of employers are employing larger shares of the labor force, giving employers greater power to keep wages down,” Bishop Dewane said. “Making matters worse, a majority of the largest franchise chains in the United States have historically used ‘no-poach’ clauses to prevent even low-wage workers from trying to get a higher wage at another franchise.”

“How to respond?” Bishop Dewane asked. “State and federal law enforcement agencies should continue working to prevent anticompetitive behavior by employers that lowers wages,” he suggested. “Lawmakers, legal advocates, unions, and worker centers may wish to explore mechanisms for workers to recover wages that were lost to anticompetitive behavior.”

“The 1919 ‘Bishops’ Program’ put its section on employee ownership next to the anti-monopoly section, and for good reason,” Bishop Dewane said. “In contrast to monopoly power, employee ownership gives workers access to the fruits of private companies, and in the best instances, gives meaningful ways to participate in management,” a theme also endorsed in the bishops’ 1986 pastoral letter, “Economic Justice for All.”

One way Catholics can encourage more worker ownership, he said, was to “support the Catholic Campaign for Human Development and other organizations that help workers start new companies or achieve ownership in existing ones.”

Bishop Dewane took note of the “dramatic decline of worker unionization rates,” with only about 10.5 percent of workers being union members — and just 6.4 percent membership in the private sector.

“From the church’s perspective, progress must include the expression of solidarity that unions strive to embody, as well as the respect for the priority of labor over capital, which is nothing less than the primacy of human beings over ‘things,'” Bishop Dewane said.

He noted how the “Bishops’ Program” in 1919 — “years before” the 1935 passage of the National Labor Relations Act — “asserted the ‘right of labor to organize and to deal with employers through representatives.’ Here, the ‘Bishops’ Program’ was solidly in line with Pope Leo XIII and his successors. As Pope Francis has said, ‘There is no good society without a good union.'”

The “Bishops’ Program” also declared that “changes in our economic and political systems will have only partial and feeble efficiency if they be not reinforced by the Christian view of work and wealth.”

“In this view, workers and owners both have rights and duties toward each other; a business enterprise must view itself as a ‘society of persons’ rather than a mere commercial instrument,” Bishop Dewane said.

“As Pope Francis recently said, ‘The new course for sustainable economic development needs to set the person and work at the center,'” Bishop Dewane added.

“To this end, no merely technocratic policy changes will bear the fruit that is so desperately needed today. Rather, with consideration for the treasury of the church’s social teaching, let us consider ‘new processes’ that can build up justice in the workplace over time. Let us then proceed as a people who, through baptism, share in Christ’s anointing ‘to bring glad tidings to the poor.'”