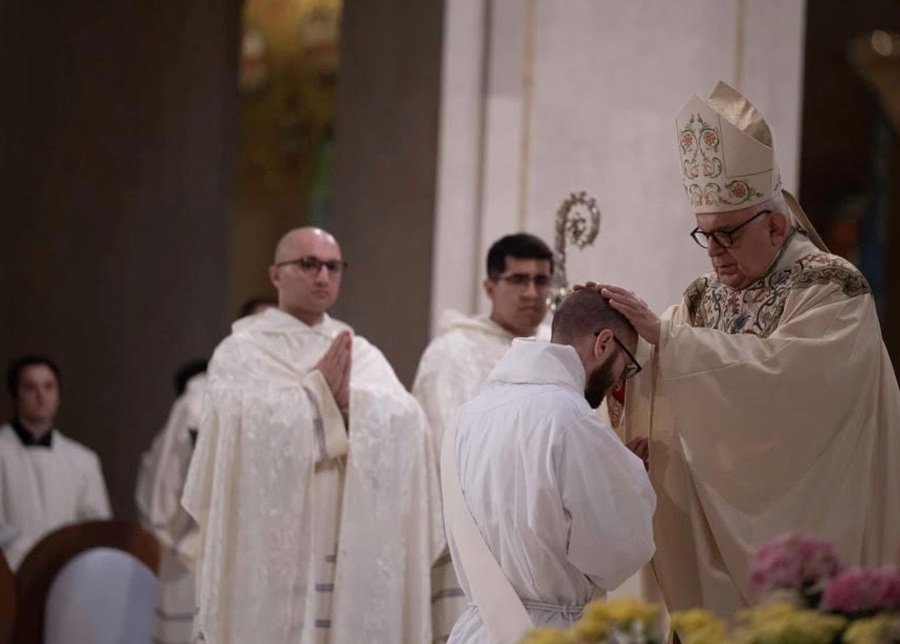 Photo Credit: CNS/courtesy Elizabeth Day via Rhode Island Catholic - Father Damian Marie Day, valedictorian of Providence College's class of 2015, is ordained a priest by Archbishop J. Augustine Di Noia at the Basilica of the National Shrine of the Immaculate Conception in Washington May 21, 2022.

In the past several years, an increasing number of Providence College graduates have pursued a vocation with the Dominican order that runs the Rhode Island university.

“During the five years I was in Providence, we had at least one student enter the novitiate at the end of each year,” said Dominican Father Michael Weibley, whose first assignment after ordination was as a chaplain and professor at Providence College.

“An average of a novice a year like that is a tremendous blessing for the order,” said the priest, who was transferred this year to serve as pastor of SS. Phillip and James Parish in Baltimore.

The increased number of vocations coming from the college emerges in a climate of declining rates of new vocations, particularly for religious orders: In the past 60 years, the total number of active religious priests in the United States has been reduced by more than half.

In the past 20 years, the Dominican Province of St. Joseph, which comprises the Northeastern corner of the United States, has been reporting steadily increasing vocations, with many of the new recruits being drawn directly from Providence College.

The most recent graduate of the university to complete his journey to ordination is Father Damian Day, valedictorian of the class of 2015. A native of Rehoboth, Massachusetts, Father Day was ordained May 21 and is currently completing his licentiate in sacred theology. He said his first encounter with the Dominicans came during his undergraduate career.

“I was attracted both by their preaching and by their joy,” he told Rhode Island Catholic, newspaper of the Diocese of Providence. said. “At Providence College, I discovered the joy of knowing Christ through investigating the truth with my teachers and forming deep friendships.”

“For many of us, it was the character of St. Dominic himself that attracted us to his Order of Preachers,” recounts Trevor Wakefield, who graduated from Providence College in 2021 and began his Dominican novitiate in the same year.

“Father Weibley recommended a biography of Dominic to me, and I was instantly inspired by him,” Wakefield explains. “His energy and compassion almost made him feel like a new, unexpected father figure for me.”

“The Life of St. Dominic,” written by the Dominican Friar Father Bede Jarrett in 1924, is Father Weibley’s go-to suggestion for anyone curious about the order’s venerable founder.

The book notes that Dominic’s commitment to preaching came only after “long years of a patient and hidden life,” even saying that “considering at what age he died, and how great a work he inaugurated, it is really astonishing to notice how large a proportion of his life was thus spent in solitude and peace.”

“When you’re seeing younger and younger friars on campus or students your own age going directly into the novitiate after graduating, it becomes much easier to envision yourself actually pursuing that lifestyle,” he said.

Many others have speculated on this trend including Archbishop J. Augustine Di Noia. The prelate, who is the adjunct secretary of the Congregation for the Doctrine of the Faith, is a Dominican who also graduated from Providence College.

In a 2010 conference at the school he stressed that the intellectual character of the Dominicans had a unique appeal in a collegiate setting.

“But it is not just the clarity of the Dominican way of thinking, reasoning, teaching and preaching that attracts them,” Archbishop Di Noia said. “It is something much deeper: not just clarity, but the love that drives it.”

According to Brother Raphael Arteaga, it was precisely this atmosphere that led him to the Dominicans after graduating from Providence College in 2019.

“The friars took every opportunity to invite students into their common fraternity with invitations to prayers, meals, and recreation… demonstrating with great zeal the perennially attractive dynamism of the Dominican vocation,” wrote Brother Arteaga in a letter to the Rhode Island Catholic, diocesan newspaper.

At Providence, Brother Arteaga said he encountered a “zeal for the apostolate that flowed from (the friars’) religious life, a life which included constant prayer… fidelity to religious vows, assiduous study, and the living of one heart and mind with one another in community.”

In his address years ago, Archbishop Di Noia said that the specific reasons for the influx of new friars could be known only to God, it was clear that this blessing must be used for the good of the church.

The increase in numbers, he said, “will bring with it whatever we need to rise to the occasion; the divine ‘vote of confidence,’ so to speak, has already been cast. If God is for us, who can be against us?”