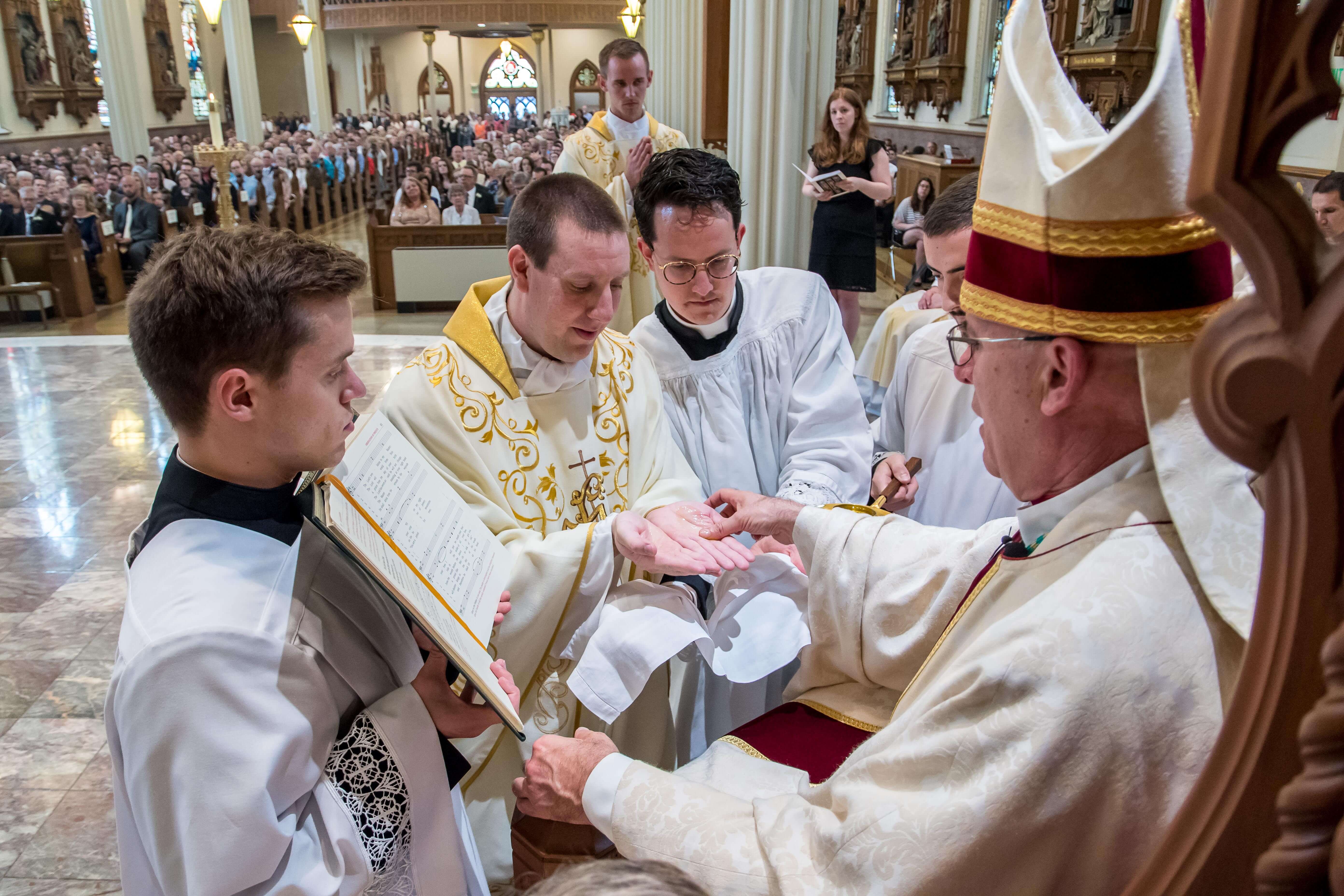 Photo Credit: CNS/Joe Romie, Today's Catholic - Bishop Kevin Rhoades of Fort Wayne-South Bend, Indiana, anoints the hands of Father Nathan Maskal during an ordination Mass last year at the Cathedral of the Immaculate Conception in Fort Wayne. The new crop of priests being ordained in 2019 had a wide variety of careers before discerning a call to priesthood, according to a report issued May 3 by the Center for Applied Research in the apostolate.

The new crop of priests being ordained this year had a wide variety of careers before discerning a call to priesthood, according to a report issued May 3 by the Center for Applied Research in the apostolate.

Education was the top career choice of ordinands at 11 percent — more than twice any other field.

“I spent five years playing guitar in a punk rock band that toured the country and recorded albums,” said Patrick Klekas of the Diocese of Reno, Nevada. Klekas’ band was called the Girlfriend Season. In a 2010 interview with his hometown newspaper, the Elko Daily Free Press, he said, “We’re hoping to get to a point where we can do this full time.” Klekas will be doing something else full time instead.

“I have a deep love of astronomy and that the study of the night sky helped lead me to baptism and faith in God at age 20,” said Dean Marshall of the Diocese of Sacramento, California, on a vocations webpage for the U.S. Conference of Catholic Bishops.

“I was a pole vaulter at a Division I university,” said Derik Peterman of the Archdiocese of Detroit. “I try to keep involved with the sport by coaching and competing.”

“I once drove a taxicab — before Uber or Lyft — on the weekends while holding a full-time job during the week,” said Timothy Kalange, who will be ordained a Benedictine priest.

“I was a dental assistant before I entered the seminary. I have traveled to 15 different countries,” said Charles Moat Jr., who will be ordained for the Society of the Divine Word. “I was a member of the United States Air Force Honor Guard, where I participated in the inauguration of President George W. Bush and the funeral of President Ronald Reagan.”

Then, there are the more circuitous paths to the priesthood. Said Stephen Buting of the Archdiocese of Milwaukee: “I never altar served as a youth and was terrified of lectoring at Mass.”

With data collected annually for the past 20 years, some comparisons between then and now can be made by CARA, which is housed at Georgetown University in Washington.

The average age of ordinands who responded to the 1999 survey was 36. Over the past 20 years, that has trickled downward to 33. The youngest ordinand responding to this year’s survey was born in 1994; the oldest was born in 1949.

One-fourth of all ordinands responding to the survey, compiled by CARA’s Mary Gautier and Sister Thu T. Do, a member of the Lovers of the Holy Cross, reported having education debt before beginning seminary studies. The average debt was a hair under $30,000; some ordinands had debt as high as $119,000. During their years as a seminarian, they were able to reduce that debt by only $3,000 on average.

Religious communities, home to about a quarter of all of this year’s ordinands, did the most to help their seminarians hack away at their debt; 68 percent of religious ordinands reported that their orders helped.

Family members helped 24 percent or ordinands reduce their educational debt, and the Knights of Columbus’ Fund for Vocations helped 16 percent of reporting diocesan ordinands cut their debt, although no help from them was reported by religious order ordinands.

The CARA survey also tracks factors that may help lead men to a priestly vocation. Seventy-seven percent reported that both their parents were Catholic when they were children, and 34 percent have had a relative who is a priest or religious.

Seventy-five percent of ordinands responding to the survey said they participated in Eucharistic adoration on a regular basis before entering the seminary, and 73 percent prayed the rosary. Next closest was attending prayer group or Bible study, cited by 47 percent.

Fifty-two percent reported participating in a “Come and See” weekend at the seminary or the religious order, while 66 percent have seen the vocational promotion DVD “Fishers of Men,” published by the USCCB.