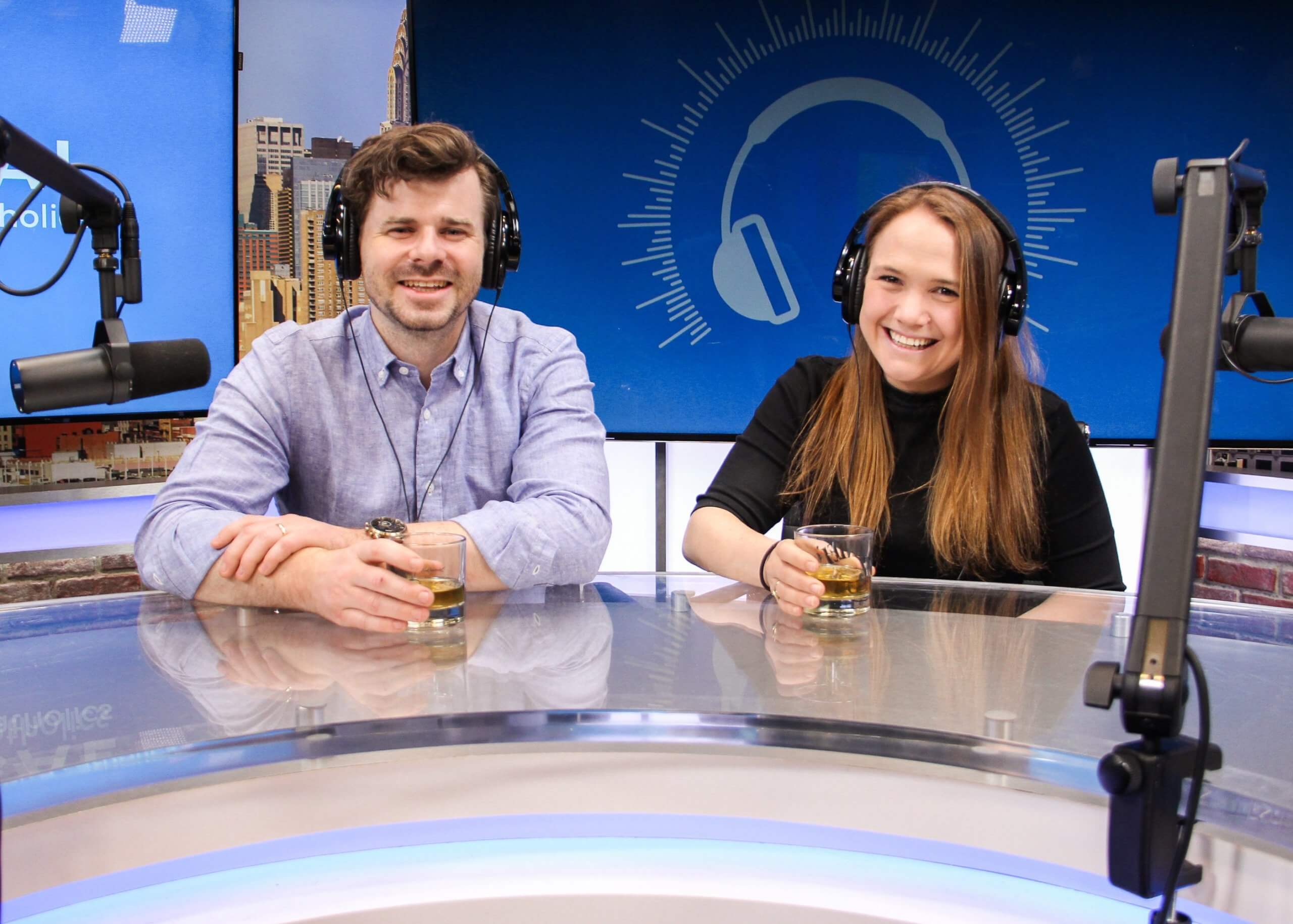 Photo Credit: CNS/Keara Hanlon, courtesy America Media - Zac Davis and Ashley McKinless, co-hosts of the podcast Jesuitical from America Media are pictured March 15. Davis is an associate editor and director for audience engagement and analytics at America and McKinless is an executive editor at America.

Co-hosted by Zac Davis and Ashley McKinless, podcast episodes focus on three main segments — Catholic news, an interview with a guest and faith-sharing — “often over drinks,” as the podcast tagline puts it, and through the lens of Ignatian spirituality.

With more than a million downloads and about 40,000-50,000 downloads per month, Jesuitical has reached listeners globally, grown an online community, found financial supporters and is even hosting a pilgrimage to Italy in September.

From its founding in 2017, the podcast has sought to fill a gap in the Catholic podcasting world.

While there were prayer apps, apologetics resources and “theology nerd” podcasts, “we didn’t see a Catholic podcast that was more outward looking,” said McKinless, who is an executive editor at America Media.

“We wanted to create a space where there could be conversations about topics in the church that are contested in the modern world and to not be afraid of bringing on people who weren’t 100% certain in their faith or 100% in the church or were struggling with questions of Catholic teaching and their relationship to God and what it means to be a Catholic in the world today,” McKinless told Catholic News Service.

Building a space of encounter with a diversity of viewpoints, not simply Catholic ones, is a point of pride for McKinless these past five years. “We’ve made it a point to talk to Muslims, Jewish people, atheists, spiritual seekers,” she said. That’s a unique contribution to Catholic media, she added.

Another factor that contributed to Jesuitical’s initial success was narrowly defining its target audience.

Listeners could be young people who had recently graduated or finished a year of service work. Perhaps they had been involved in campus ministry, theology or youth group and are now living in a new city, where they are struggling to fit into parish life or Catholic life and “don’t feel like they have an outlet to talk about these things,” Davis said.

“We wanted to create a space to invite people in where we weren’t assuming that they didn’t know anything about the church or that they had questions about the church,” he told CNS. But “they just wanted to hang out and learn some new things, talk about spirituality in an inviting way. I think we’ve hit that market,” he said.

Today, the podcast has reached beyond that audience and attracts older listeners who want to know what young people “actually think” outside of formal church settings, added Davis, who is an associate editor and director for audience engagement and analytics at America Media.

For listeners, no matter their age, the draw to the podcast is the Ignatian spirituality the show strives to cultivate.=

The last segment in the podcast, called “As One Friend Speaks to Another,” is the faith-sharing part in the show where the co-hosts talk about where they’ve found God during the week.

“I’ve heard Jesuits come up and tell us, ‘You guys are modeling Ignatian spirituality in an entirely new way,’ which is great to hear because Ashley and I will be the first to admit we’re not experts in it. We’re not Jesuits. We’ve not done the Spiritual Exercises (of St. Ignatius Loyola). We are just trying to use this tradition in a modern, contemporary context,” Davis said.

Apart from their faith-sharing segment, Davis and McKinless said they way they select guests and examine news brings a Jesuit perspective to the show.

“Keeping our eyes wide open, reviewing (the news) the way the Examen reviews every day the lights and the shadows and trying to take that same approach to how you look at Catholic news is something we keep in mind,” Davis said.

Their innate curiosity about the world informs how they choose what news to cover and whom to interview.

“There’s really not a corner of the church or culture or politics that we don’t think there’s a way in for us for and a way for us to find God working through God’s people in those spaces,” McKinless said.

Embracing Ignatian spirituality also means meeting people where they are. “We’re not going to wait until someone’s 100% on board with everything the church teaches before we’re going to be willing to talk to them and have that encounter,” she added.

For Davis, one of the best parts about Jesuitical is the community that’s formed online through their Facebook group. “They’re people who are kindred spirits who found each other and help each other” and interact without any prodding, he said.

Podcasts are uniquely suited to building virtual community, McKinless said. And the two wanted to deepen that through a Facebook group, which now has more than 4,800 members. “It’s a very organic community. It runs itself and people are respective and constructive and charitable,” McKinless said.

Davis believes that the U.S. church is experiencing an “upheaval of what Catholic life looks like.” While the focus in the past has been on the parish, young Catholics today are looking outside of the parish to find community.

“To be able to play a small part as we’re figuring it out in real time has meant a lot to me,” Davis said.

Jesuitical also has a group of 165 Patreon supporters, listeners who pay a minimum of $5 monthly to access exclusive episodes, private posts from the co-hosts, access to virtual reading groups and other benefits.

During the Covid-19 pandemic, McKinless and Davis hosted a Zoom reading group over four weeks discussing Pope Francis’ encyclical “Fratelli Tutti” for their Patreon community, and hope to do more reading groups in the future.

Throughout the five years of the podcast, the show has gone through a few transitions. One of the founding co-hosts, Olga Segura, now works for National Catholic Reporter, and the show has a new producer, Sebastian Gomes, who also is an executive editor at America.

The changes have “forced us to keep the show fresh and ever-evolving” because “it is such a group effort that each personality does really shape the podcast,” McKinless said.

“We’re getting less young and maybe less hip, so we’re thinking about what the next five years could look like when we’re solidly in our 30s,” McKinless said.

Both co-hosts are eager to get back on the road and resume live shows after two years of travel restrictions due to the pandemic.

And McKinless mentioned another hope for the next five years: Interview more U.S. bishops.

The goal is to “bring bishops down to earth for people” and “give bishops the opportunity to show their full humanity” to the church, while modeling what a listening church can be by having conversations with them, McKinless said.

Davis and McKinless shared advice for other Catholic journalists who want to build an online community: Pay attention to emerging forms media forms, narrowly define your audience, and consider the type of space you’re creating.

If young people “think it’s going to be a place of judgment, they don’t need anymore of that. They want places where they’re safe to ask questions, they’re safe to disagree, where they feel like their concerns are being heard,” McKinless said.