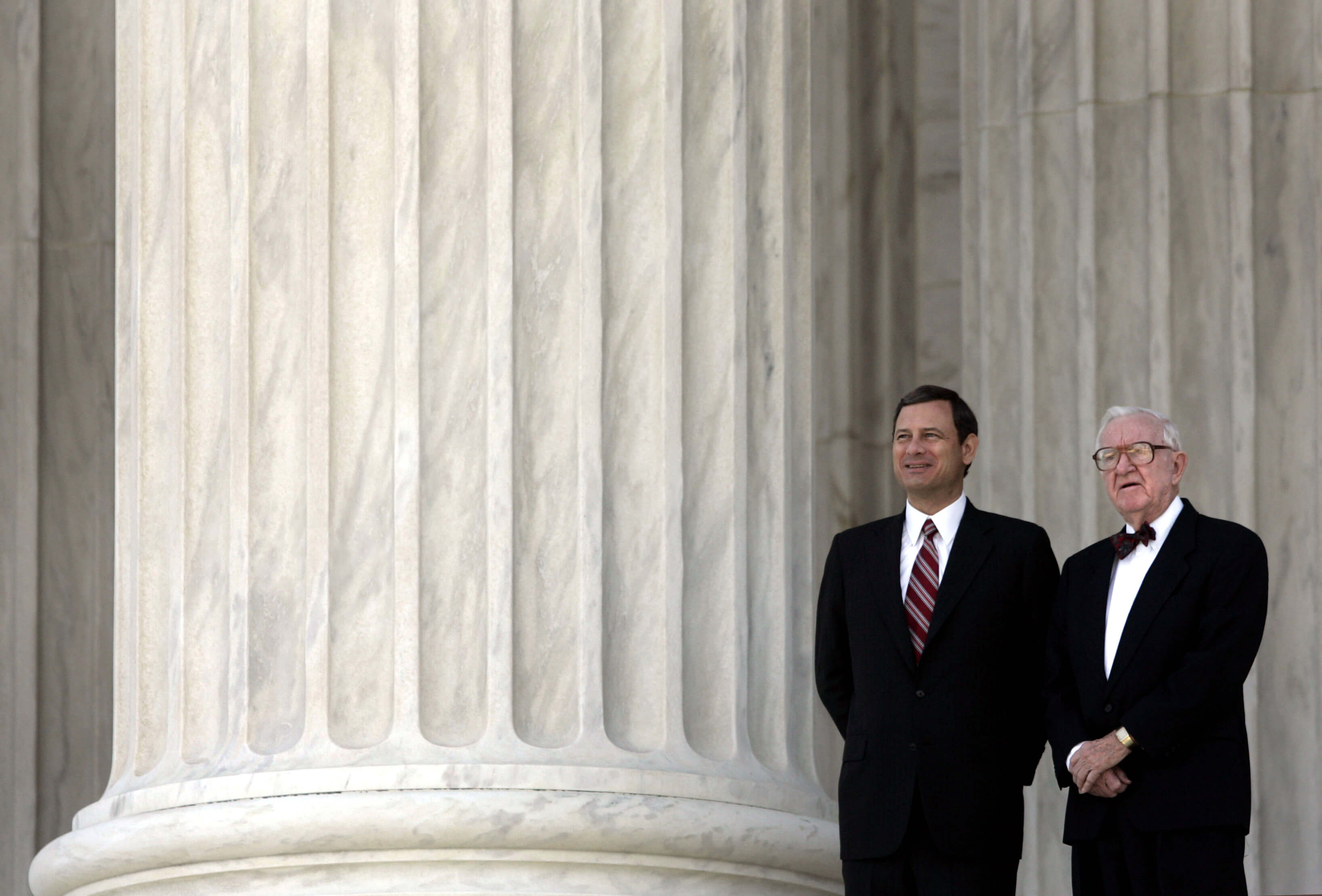 Photo Credit: CNS/Jason Reed, Reuters - U.S. Chief Justice John Roberts stands alongside Justice John Paul Stevens on the steps of the Supreme Court in Washington in 2005. Stevens, who served on the court for nearly 35 years, and retired in 2010, died July 16, in Fort Lauderdale, Florida, at age 99 after suffering complications from a stroke the previous day.

Retired Supreme Court Justice John Paul Stevens, who served on the court for nearly 35 years, died July 16 in Fort Lauderdale, Florida, at age 99 after suffering complications from a stroke the previous day.

The justice, who retired in 2010, remained active after retirement, even writing his autobiography, “The Making of a Justice: My First 94 Years,” which was released in April. Last year, he wrote an op-ed published in The New York Times calling for action to end gun violence.

“He brought to our bench an inimitable blend of kindness, humility, wisdom and independence. His unrelenting commitment to justice has left us a better nation,” Chief Justice John Roberts said in a statement.

Stevens was often portrayed as the leader of the court’s liberal side, but he didn’t stand by that description, telling The New York Times in 2007: “I don’t think of myself as a liberal at all. I think as part of my general politics, I’m pretty darn conservative.”

The justice, a Chicago-born Protestant who served as a naval intelligence officer during World War II and was awarded a Bronze Star for his work with a codebreaking team, stood firm on many issues and changed his opinion on others during his time on the high court. Most notably, he changed his views on the death penalty from initially supporting it to renouncing it completely.

Sister Helen Prejean, a Sister of St. Joseph of Medaille, who is a longtime opponent of capital punishment, posted a thread of tweets July 16 after the announcement of Stevens’ death outlining his opinion on the death penalty over the years.

She said he voted with the court’s majority in a 1976 case that reinstated the death penalty nationwide after a four-year moratorium and after his retirement he said this was the only vote he regretted.

He also spoke publicly against the death penalty in a number of interviews, calling it a “wasteful enterprise” in 2016 and something the U.S. should do away with under all circumstances in 2010.

In a 2014 interview on the “PBS NewsHour,” he said he thought the court had made a grave mistake in formulating rules that “slant the opportunity for justice in favor of the prosecutor” in death penalty cases, especially when “the cost is so high if you make a mistake.”

“If you make a mistake in a capital case, there’s no way to take care of it later on. The risk of an incorrect execution in any case, to me, is really intolerable. The system should not permit that possibility to exist,” he said.

Similarly, in 2005, he also told the American Bar Association that recent evidence that “a substantial number of death sentences have been imposed erroneously” was “profoundly significant because it indicates that there must be serious flaws in our administration of criminal justice.”