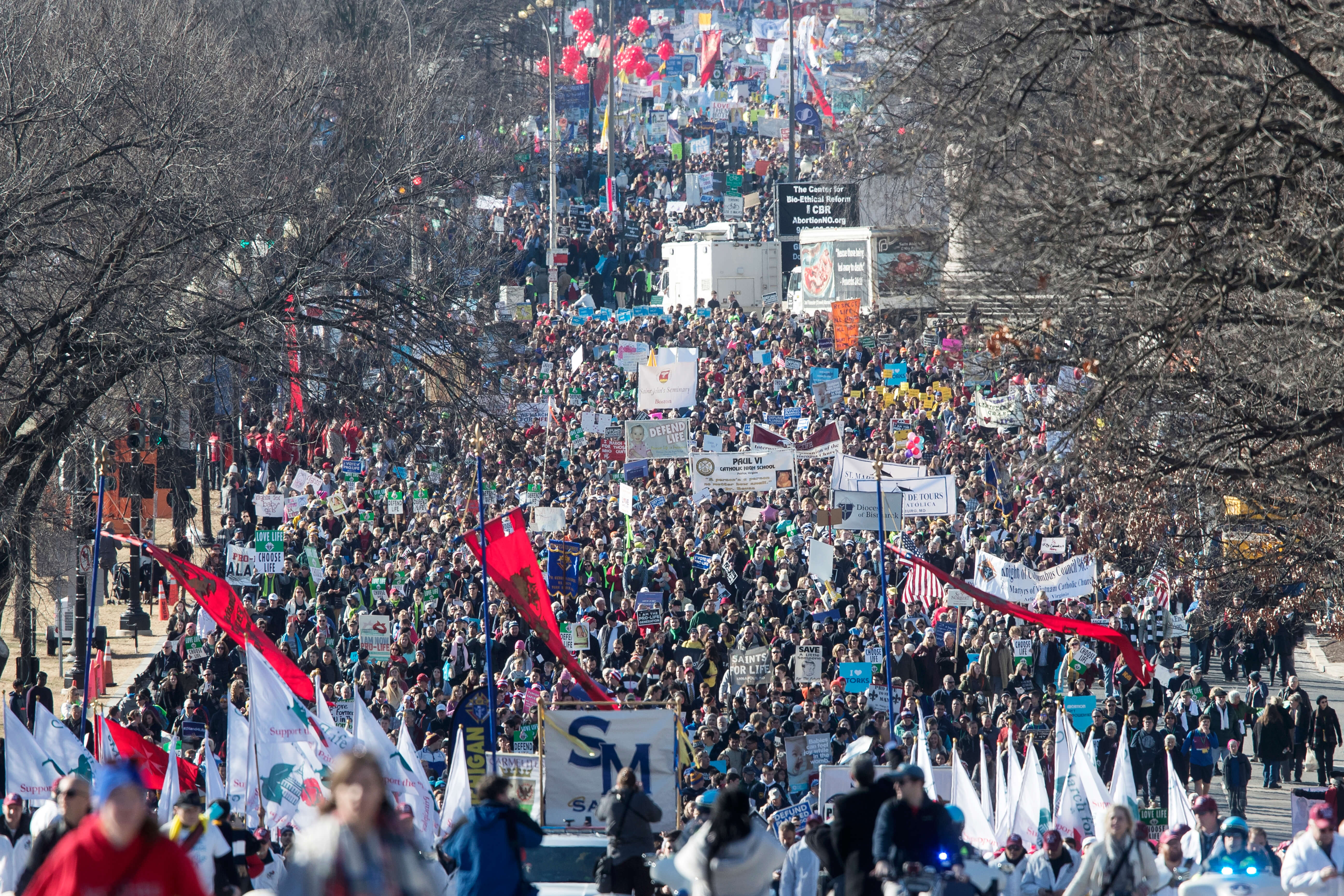 Photo Credit: CNS/Michael Reynolds, EPA - People walk up Constitution Avenue headed toward the U.S. Supreme Court while participating in the 45th March for Life Jan. 19 in Washington. The 2019 March for Life is Jan. 18 and the theme will be "Unique from Day One."

Next year’s March for Life plans to fortify its pro-life message with science that proves life begins at conception and with a specific focus on stem-cell research.

“Unique From Day One: Pro-Life Is Pro-Science” is the theme announced Oct. 18 by Jeanne Mancini, president of the March for Life Education and Defense Fund. The annual march is scheduled for Jan. 18 to mark the anniversary of the Supreme Court’s 1973 Roe v. Wade decision, which legalized abortion nationwide.

“Our DNA is present at the moment of fertilization,” Mancini said at the Capitol Hill announcement.

“Science should always be at the service of life, not the reverse,” Mancini said. She called for the passage of H.R. 2918, known as the Patients First Act, sponsored by Republican Rep. Jim Banks of Indiana. The bill would require the Department of Health and Human Services to support research on adult stem cells, not those taken from aborted babies.

On Sept. 24, HHS announced that it had it had terminated a contract between the Food and Drug Administration and Advanced Bioscience Resources Inc., which has supplied fetal tissue from abortions occurring at or after nine weeks of pregnancy. At the same time, the agency announced an audit of all federally funded research related to fetal tissue. But pro-life leaders plan to pressure HHS to end more than $100 million in funding for research involving fetal tissue.

“The mission of March for Life is to protect the baby in its earliest stages,” Mancini added. “It’s so important to have a foundation of human dignity for any kind of research.”

By the time an unborn infant reaches 18 to 20 weeks, “the science is very clear that you can perceive pain by that point in time,” said David Prentice, research director for the Charlotte Lozier Institute, the research arm of Susan B. Anthony List. “These individuals do not need to be destroyed for healing.”

Prentice said adult stem cells “from many different sources — umbilical cord blood, the liver” would be a suitable replacement.

“Science speaks the truth because it illuminates the truth,” said Dr. Grazie Pozo Christie, a radiologist and a policy adviser for The Catholic Association, who played the sound of a fetal heartbeat at five weeks of gestation. Abortion “was sold to us as a scientific advance, maybe the ultimate scientific advance,” she said.

But science has subsequently “opened our eyes, it has opened our ears,” she said.

Mancini also announced that next year’s rally speakers would include Ben Shapiro, editor in chief of The Daily Wire, and Abby Johnson, the former abortion clinic worker who founded And Then There Were None.

This year’s rally included a video hookup of President Donald Trump speaking from the White House with students from the University of Mary in North Dakota, but political speakers for 2019 won’t be announced for a few more weeks.