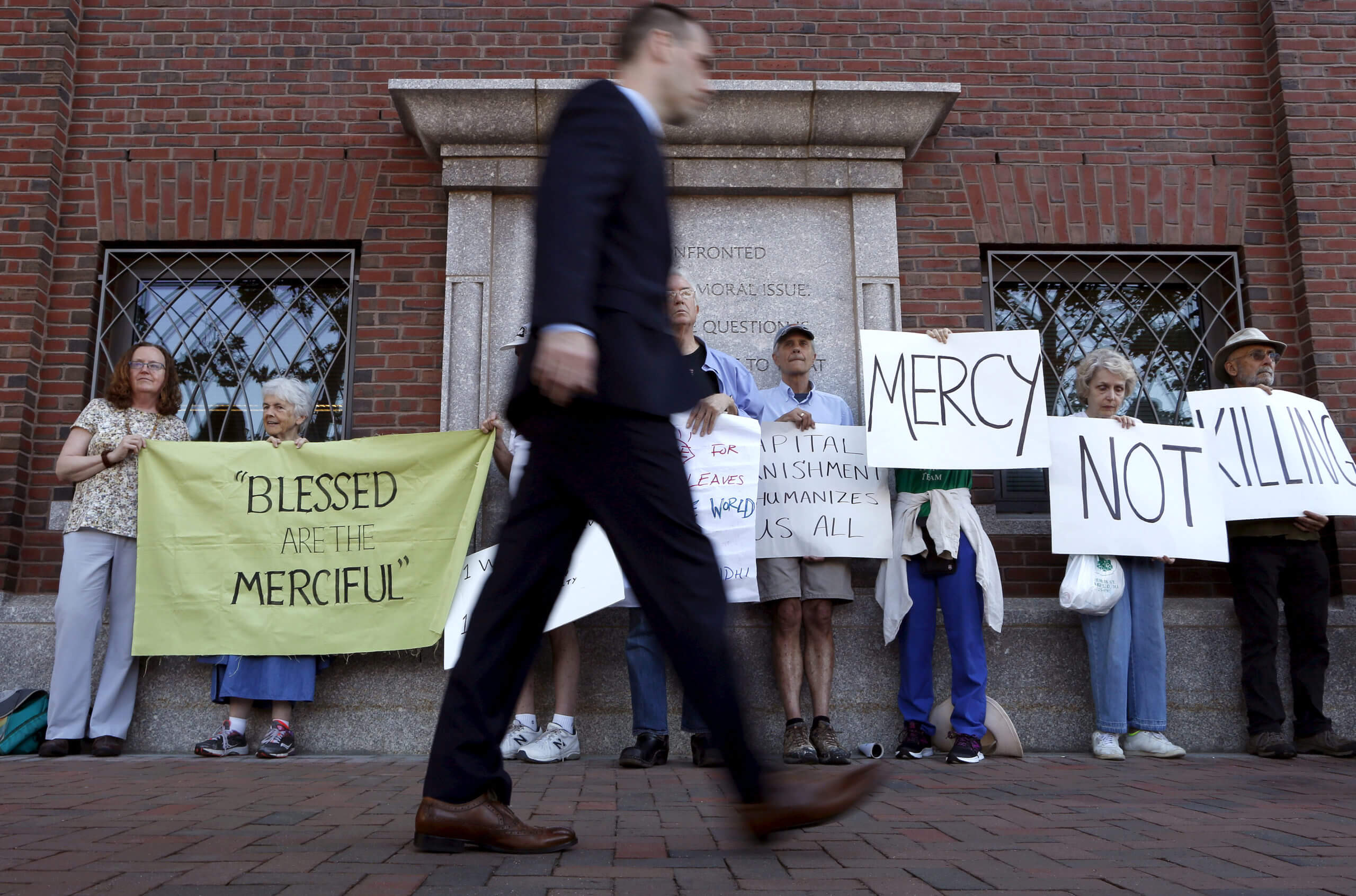 Photo Credit: CNS/Dominick Reuter - A pedestrian walks past death penalty protesters before the formal sentencing of convicted Boston Marathon bomber Dzhokhar Tsarnaev at the federal courthouse in Boston June 24, 2015. Use of the death penalty in the United States continues to decrease, according to a report released Dec. 17 by the Death Penalty Information Center.

New report shows decreased use of death penalty in U.S.

Use of the death penalty in the United States continues to decrease, according to a report released Dec. 17 by the Death Penalty Information Center.

“It is encouraging to see the continual decline in the use of the death penalty in the United States,” said Krisanne Vaillancourt Murphy, executive director of Catholic Mobilizing Network, which works to end the death penalty and promote restorative justice.

“People in the pews and clergy at the highest levels of Catholic leadership are lifting up the church’s unconditionally pro-life stance and working to build a criminal legal system that honors the sacredness of human life,” she added in a Dec. 17 statement.

This past June, the U.S. bishops voted to revise the death penalty section of the U.S. Catholic Catechism for Adults, reflecting an earlier change made by Pope Francis and the Congregation for the Doctrine of the Faith in 2018. The Catechism of the Catholic Church now states that the “death penalty is inadmissible because it is an attack on the inviolability and dignity of the person.”

The report by the Death Penalty Information Center, based in Washington, highlighted state actions against the death penalty such as New Hampshire voting to abolish capital punishment, making it the 21st state to do so; California’s decision to put all executions on hold; and Indiana’s 10-year mark since its last execution.

The report said that all together, 32 states have now either abolished the death penalty or not carried out an execution in more than a decade, and it said this number directly contrasts with the federal government’s announcement this year that it would resume executions after a 16-year hiatus.

Robert Dunham, executive director of the Death Penalty Information Center and the lead author of the organization’s 2019 report, said the issue of innocence remained at the forefront of death penalty news this year, adding that the year came close to being one of “executing the innocent.”

He said two prisoners were executed this year despite substantial doubts about their guilt, referring to Larry Swearingen in Texas and Domineque Ray in Alabama.

Swearingen had always claimed he was innocent of committing a 1998 murder and his lawyers said DNA evidence on the victim did not match his. Ray was sentenced to death in 1999 for a rape and murder but the jury at his original trial had been unable to reach a unanimous verdict since there was no physical evidence linking him to the murder.

Two other death-row inmates, Clifford Williams in Florida and Charles Ray Finch in North Carolina, were exonerated this year. Both men had been put on death row in 1976.

The report also mentions James Dailey in Florida and Rodney Reed in Texas, who both came close to execution despite compelling evidence of innocence.

“Our courts and public officials too frequently flat out ignore potentially deadly mistakes, and often take steps to obstruct the truth,” said Dunham. “That is one of the reasons why public support for the death penalty continues to fall.”

The report said seven states carried out executions this past year: Texas, Tennessee, Alabama, Georgia, Florida, South Dakota and Missouri. Of the 65 scheduled execution dates set in 2019, nearly two-third did not take place.

It also noted that as of Dec. 17, only eight states imposed more than one death sentence in 2019: Florida, Ohio, Texas, Alabama, California, North Carolina, Pennsylvania and South Carolina.

Georgia imposed a death sentence for the first time in five years, after the trial court permitted Tiffany Moss, a defendant with brain damage, to represent herself and she presented no defense at either the guilt or penalty phases of her trial.

The report also highlighted this year’s Gallup poll results about the death penalty that showed most Americans support life imprisonment over the death penalty, revealing a shift in the majority opinion on this issue for the first time in 34 years.