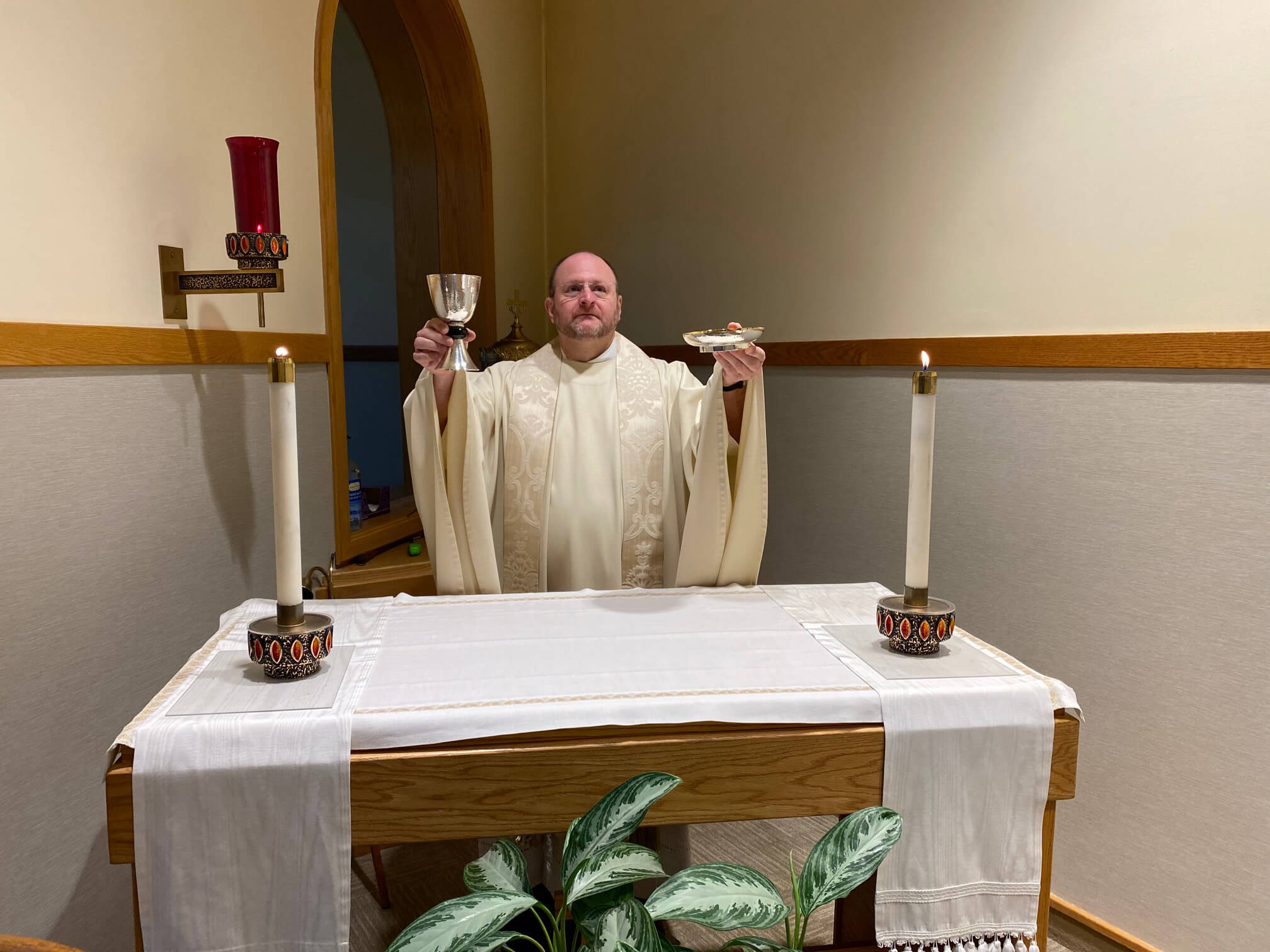 Like many people, the Rev. Shawn Brandon, pastor of Gloria Dei Lutheran Church, has had more time on his hands while sheltering in place during the coronavirus pandemic, but little did he know he would solve a five-year mystery while cleaning out a closet in his Arnold, Maryland, church.

About three miles down the road at St. Andrew by the Bay Church in Annapolis, Father Jeffrey Dauses, pastor, had been searching for years for his chalice and paten, which had been lost in a delivery mishap. He occasionally would scroll through eBay or visit local pawn shops.

“I just kept looking, thinking it would turn up somewhere. It never did. And after a couple of years, I just gave up hope and didn’t even think about it anymore,” Father Dauses said.

For a priest, a chalice and paten can have the same symbolic value as a wedding ring to a married person, said Father James Proffitt, director of the division of clergy personnel for the Archdiocese of Baltimore. They are typically given as a gift before a priest’s ordination and some have some very personal touches.

“I’d say it’s symbolic and it becomes very significant,” Father Dauses said of the chalices, which are used throughout a priest’s ministry. “There’s a level of emotional attachment.”

Father Proffitt said priests have had their parents’ wedding rings or other family heirlooms embedded in the base of chalices. Father Dauses added a nod to his Franciscan education.

“I designed it so that above the node of the chalice it looks like a silver cord, like the cord that the Franciscans wear around their waist,” Father Dauses told the Catholic Review, Baltimore’s archdiocesan media outlet.

Back in 2015, after decades of use, Father Dauses’ chalice needed to be restored to its former luster. He sent the chalice and paten away for repairs, but they never returned — until this past April.

FedEx had claimed the items were delivered to the church office. The delivery man said he had placed the package on a table next to a copy machine and had a signature to prove it. But Father Dauses’ staff had no record of the delivery. The staff even combed through the church’s security camera footage, showing no delivery had been made to the church that day.

Father Dauses assumed it had been left outside by mistake and the package had been stolen. After some wrangling, FedEx agreed to commission a replacement.

Then in late April, Father Dauses got a phone call.

“I was maybe being a little dramatic about it because I just called and said, ‘Can I stop by?’ And I didn’t tell him what was up,” Rev. Brandon said. “So I met him out in the parking lot because of social distancing. I pulled these things out and saw his jaw drop. It was incredible. He was really stunned. It took him a while to wrap his head around it because he had totally given them up as lost forever.”

Father Dauses said when Rev. Brandon took the chalice from his car, he knew immediately.

“Oh, my God, you have got to be kidding me? How in the world did you end up with that chalice?” Father Dauses told the Lutheran pastor.

When the items were delivered by mistake in 2015, Gloria Dei Lutheran Church had been going through some staff changes and the chalice and paten must have gotten lost in the shuffle and landed in storage.

“The delivery man did go into a church office. He did go into a work room with a copier. And he did put it on the table. It was just the wrong church,” Father Dauses said. “I must have driven by that church a million times in the five years. And it was sitting right there.”

“Having the original back really is a thing of great joy,” he added, “because of the symbolic and emotional significance of knowing that it was blessed by Archbishop Borders, knowing that my parents had given me this original one.”

CNS/courtesy St. Andrew by the Bay via Catholic Review