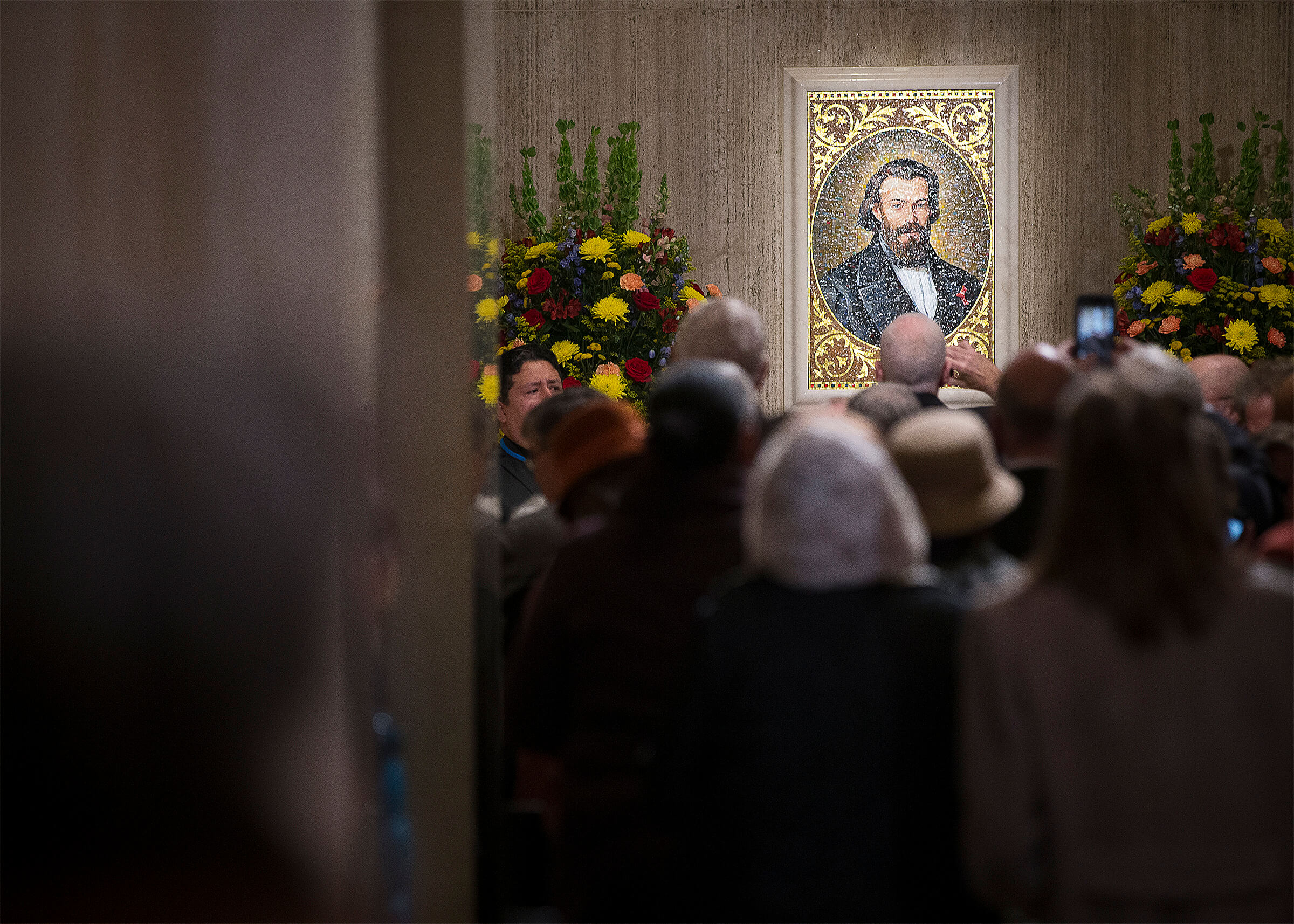 Photo Credit: CNS/Tyler Orsburn - Visitors admire a new mosaic of Blessed Frederic Ozanam at the Basilica of the National Shrine of the Immaculate Conception in Washington Jan. 26. Blessed Ozanam was part of a group of young Catholic intellectuals in the 19th century who discussed literature, history and society, while also visiting the poor and sick at home. The group founded what came to be known as the Society of St. Vincent de Paul, which is still active worldwide.

The Society of St. Vincent de Paul expects to spread throughout the country a nationwide initiative it calls Immersion, which helps recently released prisoners reenter society.

The idea has been percolating since 2007, when the society received a grant from the U.S. Conference of Catholic Bishops to explore the issue, according to Barbara McPherson, director of prison reentry services for the National Council of the Society of St. Vincent de Paul USA.

“We have an anonymous donor who has funded us for three years just as a startup,” McPherson said.

The immersion initiative has a pilot program in which hundreds of released prisoners — often known as “returning citizens” — are seen and given some aid by society representatives.

The St. Vincent de Paul of Southwest Idaho Council in the state’s Treasure Valley region is made up of 12 different conferences. It has had a particular interest in reentry services, as there are eight prisons in the valley area next to Boise, said Mark Renick, who heads up the immersion effort there.

Rather than create an undue burden on any one of the 12 conferences, they created a “Reentry Conference” specifically to run the immersion program, Renick told Catholic News Service.

It turned out that of the first 20 released prisoners who took advantage of immersion, he added, 16 of them were Catholic.

Renick himself is a returned citizen, after having served seven years for a felony conviction. “There’s nothing weird about me. I don’t have tattoos. And the person I’m talking to most likely has a brother, sister, father or crazy uncle,” he said, adding that in the past, he never talked about his crime or his time, but “now we talk about it all the time. There are 7 million people in the U.S.A. with a felony conviction, so we talk about it all the time.”

Immersion has been active for three years in southwest Idaho. “We estimate for the last year 1,000 people were paroled to my parole region; of those 1,000 people, this conference saw 665. We have a large impact,” Renick said.

Vincentians, he added, are growing more aware that “of the population they serve — the poor — many, many more people than they imagine are poor due to incarceration, either themselves or a family member.”

Renick said he “fell in love with” the Vincentian approach to someone in need: “Send two people who are trained Vincentians to sit with them. And we help them. … We offer the support that we can. We pray with them, and then we go on our way.”

Vincentians meet with returning citizens who are often assigned to a halfway house or some other form of transitional housing. “We listen to what they are looking for in terms of traditional support,” Renick said. It’s “mostly some help with rent. We officer them a bicycle, potentially a bus pass, some other things. We’ve developed a resource guide for them to go to for support after that.”

McPherson said the immersion initiative is now at the implementation stage. “We found you need to have a hard-data collection system to show results. The narrative doesn’t work anymore,” she added. The Vincentians have opted for data from the National Institute of Justice. “Without the hard data,” McPherson said, “no one’s going to fund this for us. This is a grant-funded program.”

St. Vincent de Paul representatives also have had conversations with members of Congress on funding returning-citizen efforts — which could come more to the fore as prisons and jails are seeking to release those awaiting trial for minor offenses and those convicted of nonviolent offenses to keep a COVID-19 pandemic from plaguing a prison population.

There are several components to immersion, but McPherson said “the accompaniment part is really important. We work with people who were previously incarcerated. They understand the specific needs of this poverty population. There’ s lot of trauma that took place ahead of time; 70 to 80 percent of them probably have addiction issues.”

Moreover, “60 percent of those we visited have barriers related to incarceration. It’s not just a person who may have been incarcerated, but the separation from family,” McPherson said.

“Every time we get into an issue, we find a deeper issue.” McPherson said “generational incarceration is such an issue. “In a family who’s had a person incarcerated, there’s still a good chance that someone from the next generation will be incarcerated,” she noted, recalling a returning citizen in Iowa who represented the sixth generation of incarceration.

In Idaho, “98 percent of the people in prisons are going to get out. So they’re going to be your neighbors,” Renick said. “We should make it a little bit easier to transition.”