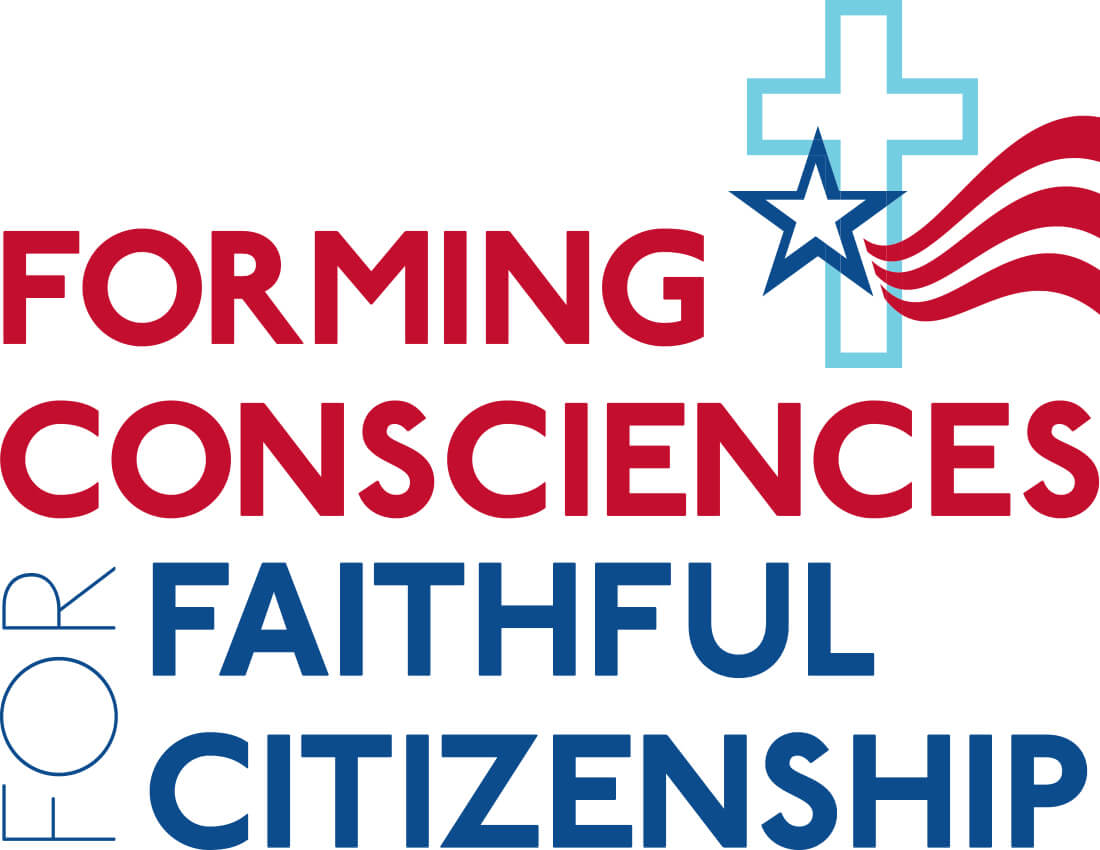 Photo Credit: CNS - This logo appears on materials, study guides and videos related to the U.S. bishops' quadrennial "Faithful Citizenship" document that provides guidance to voters during a presidential election year. Five videos in four languages created by the U.S. Conference of Catholic Bishops are a new component to supplement the document this election year.

A series of long-planned videos that supplement the U.S. bishops’ quadrennial “Faithful Citizenship” document that provides guidance to voters during a presidential election year have been finalized for viewing.

Posted on the U.S. Conference of Catholic Bishops’ website at faithfulcitizenship.org and the USCCB’s YouTube channel at bit.ly/31DHDGN, five videos in four languages explore various aspects of Catholic social teaching while reflecting the teaching of Pope Francis.

The videos are part of the bishops’ effort to broaden their outreach through the document, titled “Forming Consciences for Faithful Citizenship: A Call to Political Responsibility,” Jill Rauh, director of education and outreach in the USCCB’s Department of Justice, Peace and Human Development, said.

“The videos intend to help Catholics engage in participation in political life, first and foremost, guided by their faith as opposed to any affiliation with any political party that they have,” Rauh explained to Catholic News Service Feb. 5.

“In addition, the videos invite Catholics to engage with civility and to learn about and advocate on behalf of all of who are vulnerable, from the unborn to immigrants to people who are in poverty, to our common home, to families,” she said.

Four English-language videos of about two minutes in length examine participation in public life, protecting human life and dignity, promoting the common good and loving others. The fifth video is a six-minute compilation of the highlights of the four shorter pieces.

Videos in Spanish, Tagalog and Vietnamese are slightly longer.

Each video, funded by was produced with young people in mind, Rauh added.

“The (bishops) had a particular interest in creating videos for sharing on social media and engaging with young people,” she said.

Along with images and voices of young people, each piece features one bishop narrating an aspect of Catholic social teaching. Each production closes with a different prayer specifically written for the series.

A letter introducing the document is one of the resources. Approved by the bishops during their fall general assembly in November, the letter reminds Catholics that “we bring the richness of our faith to the public square” and that “faith and reason inform our efforts to affirm both the dignity of the human person and the common good of all.”

Other wide-ranging resources are being made available to parishes, schools, prayer groups and other interested parties through the faithful citizenship web page.

Scenes showing people feeding the hungry, protecting God’s creation, comforting the elderly, caring for children, migrant people and families, and engaging in civil discussions are prominent in the productions.

“The videos are meant to reflect the teaching of the bishops in ‘Forming Consciences for Faithful Citizenship,'” Rauh explained. “The videos are really trying to make that teaching more accessible.”

In the video about Catholic participation in public life that introduces the series, Archbishop Gomez said, “The church’s participation in shaping the moral character of society is a requirement of our faith. It is a basic part of the mission we have received from Jesus Christ.”

Later in the piece he noted, “We are not aligned with any party, but we shine the light of faith to influence parties to which we may belong as well as to elected officials and thus in our communities.”

The productions, funded by a grant from the Catholic Communication Campaign, also are meant to guide people in public life beyond voting, Rauh said, as they present “a call for ongoing engagement in the public sphere.”

Rauh also is coordinating her department’s outreach for upcoming elections through the Civilize It campaign. Introduced by the USCCB Nov. 3, one year before the 2020 vote, the campaign stresses that respectful dialogue — rather than name-calling and nasty barbs — can occur among people with differing political views.

The idea for Civilize It originated in the Social Action Office of the Archdiocese of Cincinnati in 2016. Its success in southwest Ohio caught the attention of the USCCB, which decided that the model, with a few tweaks, would be introduced in parishes nationwide.