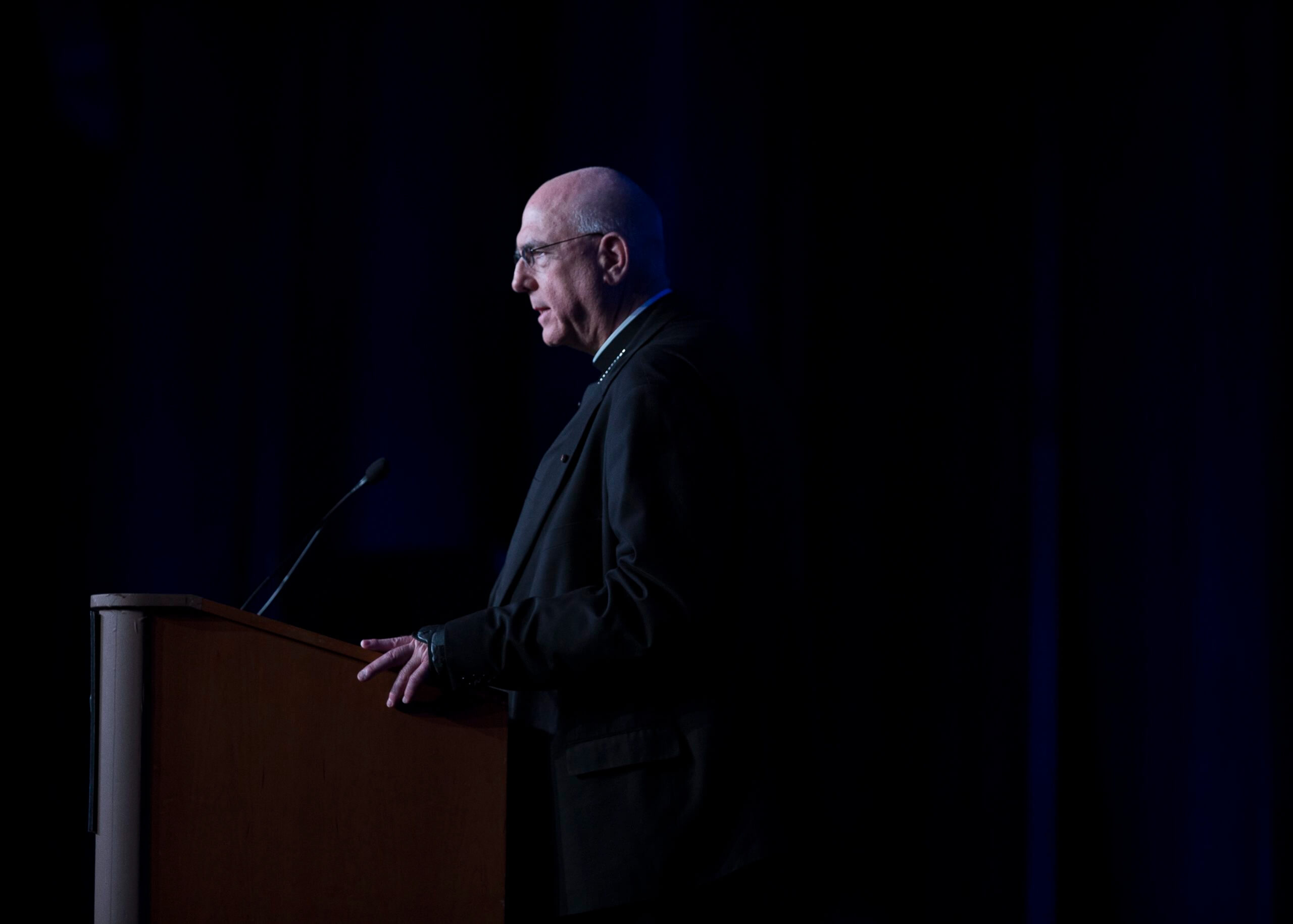 ‘We all can do something’ to foster culture of life, love, says archbishop

The chairman of the U.S. bishops’ pro-life committee told a Nebraska pro-life conference that “there is legitimate reason to hope” the U.S. Supreme Court may allow states “more authority to protect the lives of unborn children.”

“We are at a moment of great promise and opportunity in our efforts to rebuild a culture of life in our society,” Archbishop Joseph Naumann of Kansas City, Kansas, said in an evening keynote address Sept. 17 at the conference in Lincoln.

On Dec. 1, the high court will hear oral arguments in an appeal from Mississippi to keep its ban on abortions after 15 weeks of pregnancy, and supporters of the law are urging the court to reexamine its previous abortion rulings.

If the nation’s high court upholds the Mississippi state law, it could overturn the court’s 1973 decision in Roe v. Wade that legalized abortion nationwide. The issue would return to the jurisdiction of the states, as was the case before Roe.

While there is reason for hope, at the same time “advocates of abortion are more extreme in their demands,” Archbishop Naumann said.

“They celebrate abortion as a right,” he added. “They are not satisfied with abortion as a choice. The seek to compel doctors, nurses, Catholic hospitals to participate in abortion. They want to force every taxpayer to fund abortion.”

So “the stakes are high,” he said. “Our nation and our church need all of us to be fully engaged with fostering a culture of life and building a civilization of love.”

No one can do this alone, “but as Christians we are never on our own,” Archbishop Naumann said. “We need to be praying and calling upon the Holy Spirit to enlighten our minds and give courage to our hearts.”

“We all can do something or somethings,” he continued. “We can and must pray. We must make our families sanctuaries of life where true love is experienced and virtues are cultivated.

“The most important pro-life education does not happen at big events, but person to person through conversations over the kitchen table or the backyard fence, conversations in the workplace or the soccer field sideline.”

Archbishop Naumann, who is in third year as chairman of the U.S. Conference of Catholic Bishops’ Committee on Pro-Life Activities, addressed a number of issues related to abortion in his keynote address, including Communion being received by Catholic politicians who support legal abortion.

He discussed Pope Francis’ remarks on politicians, abortion and the Eucharist made during his return home after his trip to Hungary and Slovakia. The Kansas archbishop also explained why the U.S. bishops are focusing on the Eucharist with a planned document and a National Eucharistic Revival initiative.

This revival idea was prompted in part by a 2019 Pew Research study that found 69% of Catholics don’t believe the church’s teaching that Jesus is truly present in the Eucharist.

The archbishop talked about a “cultural confusion” that allows abortion and gender reassignment, tolerates a “pornography pandemic” and rejects traditional marriage. This confusion, he said, “has enveloped our society in recent years” and has “resulted in a distressing and even ominous cloud of darkness in our nation.”

“Our government permits the killing of close to a million of our own children annually with our current president vowing to place the full weight of the federal government to preserve the right to kill children,” he said, referring to President Joe Biden, a Catholic, and his calls to codify Roe v. Wade in federal law.

“Some deny the biological reality of their gender and assert gender is just a social construct,” the archbishop said. “We are confused about something so fundamental as the nature of marriage.

“We are facing a pornography pandemic that attempts to addict children to alluring explicit visual sexual content at age when they are ill-equipped and defenseless to resist, while at the same time there are forces that want to classify teaching chastity and allied virtues as hate crimes. Evil is called good and good is portrayed as evil.”

But he urged Catholics “not to be intimidated” by such “forces of darkness,” but “to continue to proclaim the truth of God’s amazing love with both boldness and tenderness,” especially to those who do not share their respect for life.

“Develop messages that will attract the attention of those who identify as pro-choice and surprise them with the irresistible beauty of the truth of God’s love and mercy revealed in Jesus,” he explained.

“However, he also said that in these cases, it’s a pastoral matter that must be addressed by the individual’s pastor,” Archbishop Naumann said.

He agreed that bishops and priests “must act as pastors not as politicians” in these cases.

“However, part of being a good pastor is the willingness to have difficult conversations with individuals for their own spiritual welfare and the welfare of others,” he said. “A pastor has an obligation to have a conversation with someone that is acting in a very public way contrary to fundamental moral teachings of the church.”

He added, “We must try to help them understand the seriousness of what they are doing and encourage them to reconsider their reasoning and change their actions.”

But if after a period “of honest dialogue” and time for them “to reflect and to reconsider” their stand and these individuals “remain obstinate in their objectively immoral actions,” they should no longer present themselves for holy Communion, he said, adding that “integrity demands” this.

He said Catholics in public life “have the opportunity both to positively and negatively influence the understanding by others of our Catholic faith. When their public actions conflict with fundamental Catholic moral teaching, they confuse and mislead many people both within and outside the church.”

The archbishop also emphasized that public policy “is just one element” of the Catholic Church’s pro-life pastoral plan and that whatever happens with regard to Roe, “the need to surround with love those considering abortion remains of paramount importance.”

One such effort is an initiative launched by the bishops’ pro-life committee called Walking with Moms in Need.

Archbishop Naumann said the U.S. bishops’ planned document on the Eucharist will address topics such as the Real Presence, eucharistic consistency, and the unity, beauty and identity of the Eucharist as the “fount and apex of the whole Christian life.”

The aim of this document, now being drafted, and a eucharistic revival with parish and diocesan events is “to motivate Catholics to ponder the great miracle that occurs at each and every Mass, when the Lord of lords and King of kings makes himself present to us under the humble appearance of unleavened bread and wine,” he said.