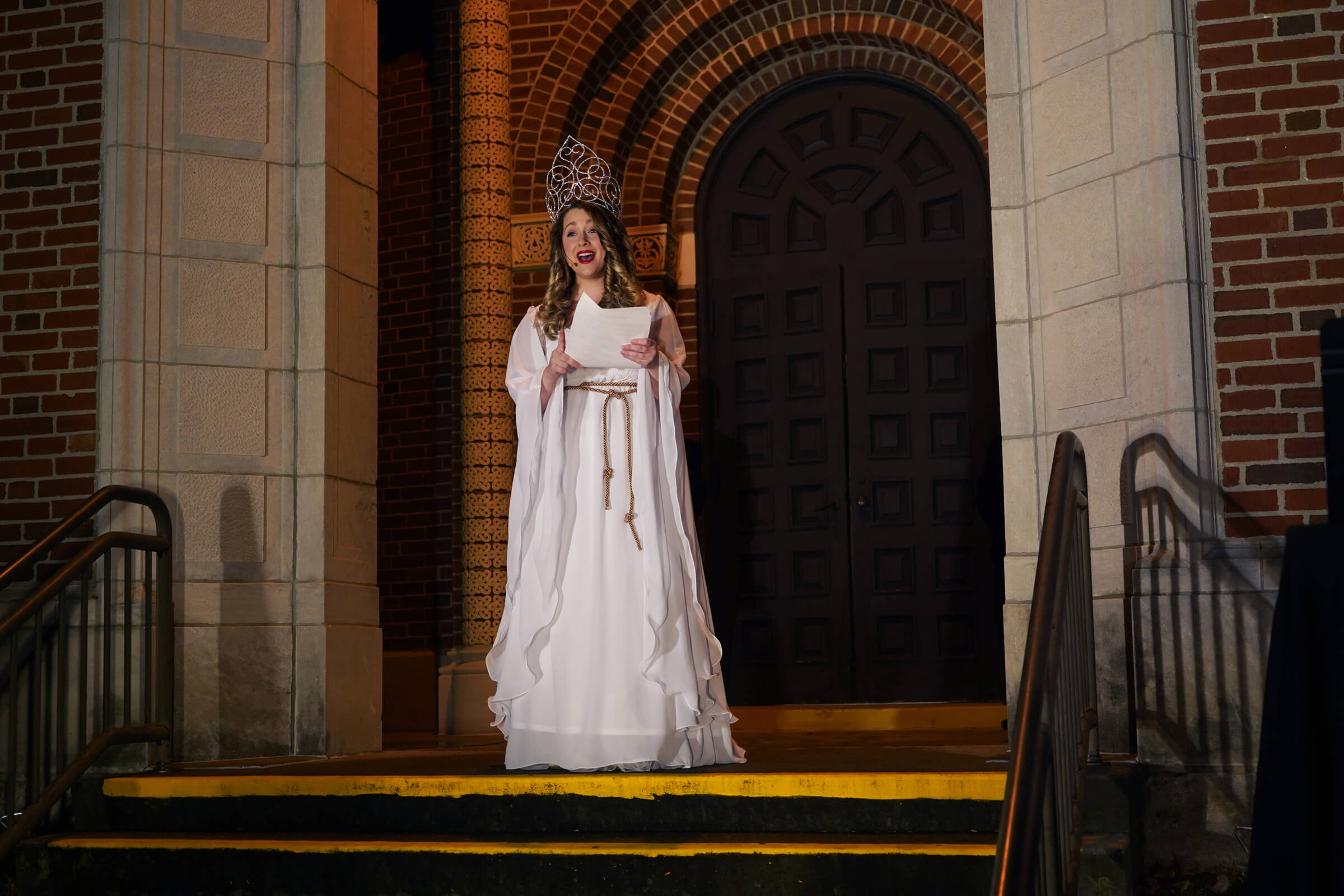 Photo Credit: CNS/Katie Rutter - Hillary Cremeens, a native of Ferdinand, Indiana, portrays the Christkindl, or Christmas angel, at the opening of the town's Christkindlmarkt Nov. 16. The Monastery Immaculate Conception provided the backdrop for the celebration, which was modeled after a festival by the same name in Nuremberg, Germany.

The sights and sounds of Christmas brightened the massive dome of the Monastery Immaculate Conception in Ferdinand, Indiana, as six Sisters of St. Benedict rang out “Silent Night” on hand bells.

The gentle chimes of the season soothed the hundreds of people who gathered at the foot of the Ferdinand monastery during the cold Nov. 16 night, while the German tradition launched the Christmas season in the Indiana hamlet.

The Benedictines were heralding the opening of the town’s Christkindlmarkt, a weekend of vendors, concerts and Christmas cheer. The sisters have bolstered Ferdinand’s tradition since the festivities began two decades ago.

“It’s a town celebration and the sisters are very much an integral part of the town of Ferdinand,” said Sister Rose Wildeman, the monastery coordinator and director of the hand-bell choir.

About 10,000 people — more than four times the number of Ferdinand residents — amassed into the small town for its Christkindlmarkt held Nov. 16-18.

The monastery — its arched windows, turrets and towers seeming to come straight out of medieval Europe — provided an appropriate backdrop for the weekend.

Ferdinand city officials founded Christkindlmarkt with the intent of transporting attendees to Old World Germany. The event mimics a celebration by the same name held in Nuremberg, Germany, since the 16th century.

“Ferdinand has so many German characteristics about it. It looks like little Bavaria as you come in over the hills,” said Diane Hoppenjans, the executive director of Ferdinand Tourism and founder of the celebration.

“You see the church steeple in the center of the town and the village is kind of gathered around it and this huge beautiful monastery,” Hoppenjans told Catholic News Service.

The German Catholic community was founded in 1840 by Father Joseph Kundek, a missionary priest from Croatia. The Benedictines, their founding community rooted in Eichstatt, Germany, arrived to teach the local children in 1867.

“I can’t imagine Ferdinand without (the monastery) and without the nuns’ influence,” Hoppenjans said.

“I think it’s because of the monastery that we were able to grow the way we did, the way the town did, and that also kind of kept us with that German tradition,” she said.

For Christkindlmarkt, the sisters supplied their event hall as one of six locations where vendors set up booths filled with crafts and other items. The nuns also offered tours of their monastery and sold baked goods, including German-inspired desserts like “kuchen,” which is a cinnamon or cranberry-topped cake, and springerle and almerle cookies.

“The springerle cookie is a traditional German cookie, it has a licorice flavor. We have molds that some of our sisters brought back in the 1920s,” said Sister Jean Marie Ballard, the quality assurance manager for the religious order’s bakery.

The evening of Nov. 16 — the Friday before the events officially began — the monastery also served as the focal point for Christkindlmarkt Eve. The highlight of the night, accented by the sisters’ hand bells and local choirs, is the moment that “Christkindl” emerged from the monastery’s doors.

Plainly translated “Christ Child” and, at one time, an imaginative portrayal of the Baby Jesus, the modern Christkindl is an angel who many European families still believe is the deliverer of gifts at Christmas.

Ferdinand’s Christkindl is a close replica of the angel that opens the Nuremberg celebration. Dressed in a white, gold-trimmed gown and portrayed by Ferdinand native Hillary Cremeens, the Christkindl emerged from the monastery to the sound of trumpets and sang a welcoming message.

“Ye men and women folk, who once were children too, be child again today, and do rejoice when the Christ Child invites you all to see this market,” she sang, reciting a translated version of Nuremberg’s Christkindl message.

Following the angel’s welcome, the crowds were invited into the monastery for a German dinner and to visit the sisters’ table full of baked goods.

“This is their home, and their home is Ferdinand,” she said.