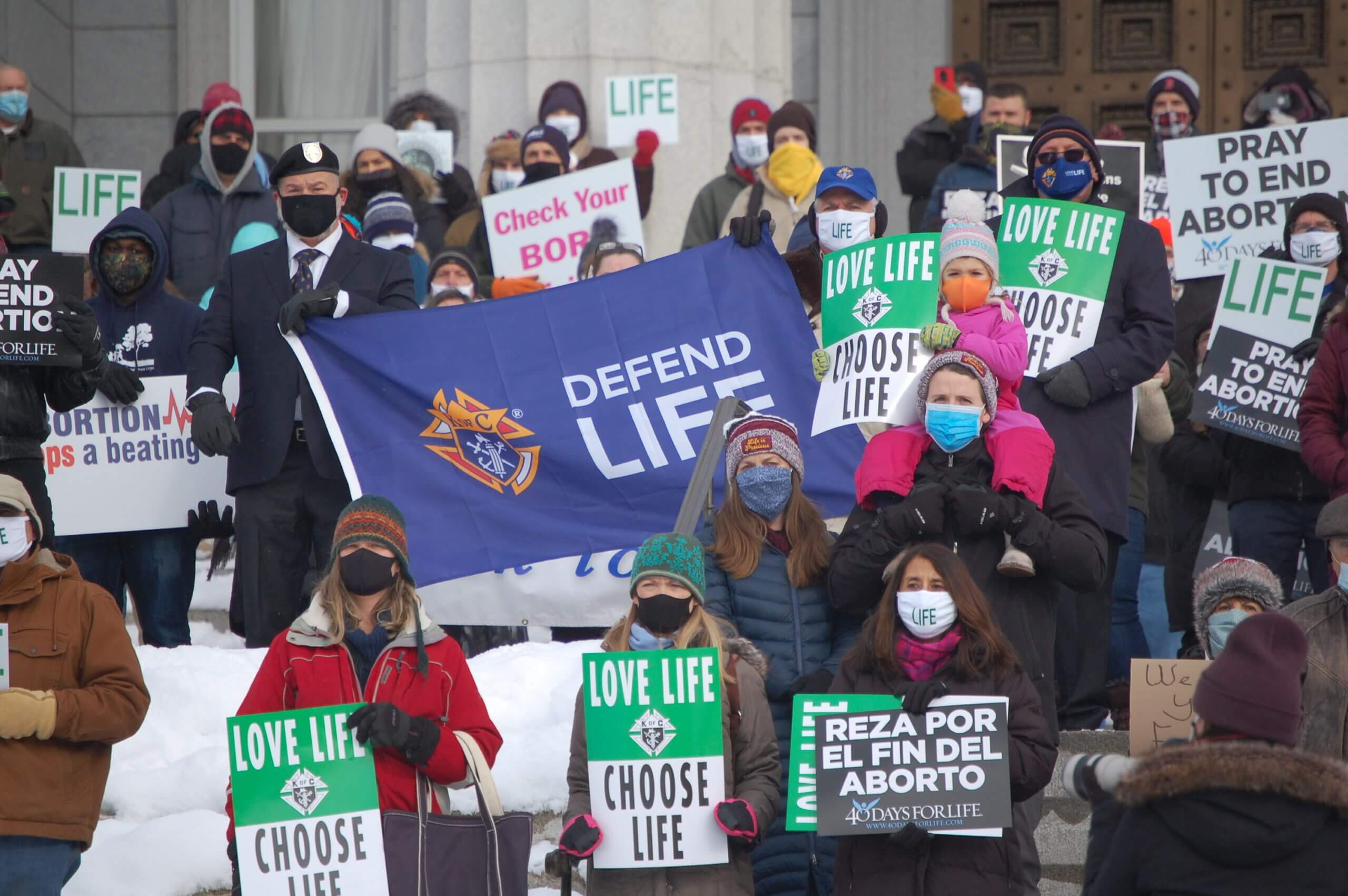 Photo Credit: Vermont Catholic/Cori Fugere Urban - Participants in the 2021 Annual Rally for Life in Montpelier gather on the steps of the Vermont Statehouse in Montpelier Jan. 23.

Much fear used to promote Proposal 5 has been based upon what has happened in some states with a very different political climate. Part of the rhetoric asserted that when the U.S. Supreme Court issued the Dobbs decision overturning Roe v. Wade, Vermonters responded with Proposal 5. That is false. The process began in 2019, more than two years before the Dobbs case was filed at the Supreme Court.

In fact, Roe v. Wade has never had an impact on Vermont law nor will the Dobbs decision.

Abortion had been legal in Vermont for a full year before Roe v. Wade was decided. Abortion was legalized by a Vermont court decision Beecham v. Leahy on Jan. 14, 1972. A year later, the ruling in Roe v. Wade, was issued but added nothing to the access to abortion in Vermont. Abortion access in Vermont was established by the State Supreme Court in Beecham. The Vermont legislature never acted to impose any restrictions on abortion despite Beecham leaving open the possibility of restriction, but not prohibition. Act 47 of the 2019 legislature secured the Beecham decision in statute with no restrictions.

Some authors (such as but not only, Rep. Maxine Grad) have asserted that there are no elective late-term abortions (i.e., 22 weeks gestation or more) in Vermont because all late-term abortions are done at the University of Vermont Medical Center and only for grave fetal abnormality or significant threats to the wellbeing of the mother and a case-specific approval of the Medical Center Ethics Committee.

Grad also asserted that if UVM eliminated the Ethics Committee or otherwise changed their standards, the legislature would simply act to reinstate the restrictions currently established by the medical center. But that reinstatement would violate the very constitutional amendment being debated right now. If the legislature had wanted to restrict it after 22 weeks, such eventuality was not anticipated by those crafting the amendment. That was never the intent of the legislature.

Also, no matter how robust the UVMMC Ethics Committee might be, an ethics committee primarily has an advisory role. Any authority is derived from the institution itself. A patient with an explicit constitutional right to “reproductive autonomy” including a given procedure would not be denied the procedure despite the objections of an Ethics Committee or a hospital policy.

The legislature has repeatedly refused to take up conscience protection concerning abortion and other medical services. Courts frequently take notice of legislative intent when handling difficult cases. UVMMC would have grave difficulty in justifying its denial of service to a patient. Afterall, clinical professionals and medical institutions are quite risk-adverse; they do not want to end up in court.

Some have even argued that professional standards of care recommended by the medical specialty societies would have to be observed. Does anyone believe that a medical professional society has the authority to override a state constitution?

But the fact is that Proposal 5/Article 22 applies statewide, not just to UVM. Would out-of-state-second and third-trimester abortion providers come to Vermont to take advantage of a constitutional protection they would have? And would this involve locations beyond UVMMC?

As has often been noted by proponents of Proposal 5, especially when being asked what else is included in the vague language of the measure, this amendment goes beyond abortion. The authors wanted it to be broad enough to include emerging technologies. But how far?  What else is being masked by the vague language of the proposal? The answer has consistently been, “The court will decide.”

Finally, I ask you to envision what happens if this measure is enacted and new technological horizons emerge?

Moving beyond the clinical world, let’s look out at the streets, not just in Burlington. If “personal reproductive liberty” becomes a constitutional right, I suggest that could mean that laws banning prostitution become unconstitutional infringements on autonomy. That would mean that almost any town in the state could have its own “red light district.”

And, since the amendment applies to “individuals” not just adults, what rights do parents give up?  What rights are minors – even young children – given? Are we asking children to make adult decisions without input from their parents?

—Deacon Pete Gummere is a certified bioethicist with more than 10 years of hospital ethics committee membership and additional experience as chair of the Ethics Consultation Team. He lives in St. Johnsbury and serves at Corpus Christi Parish.