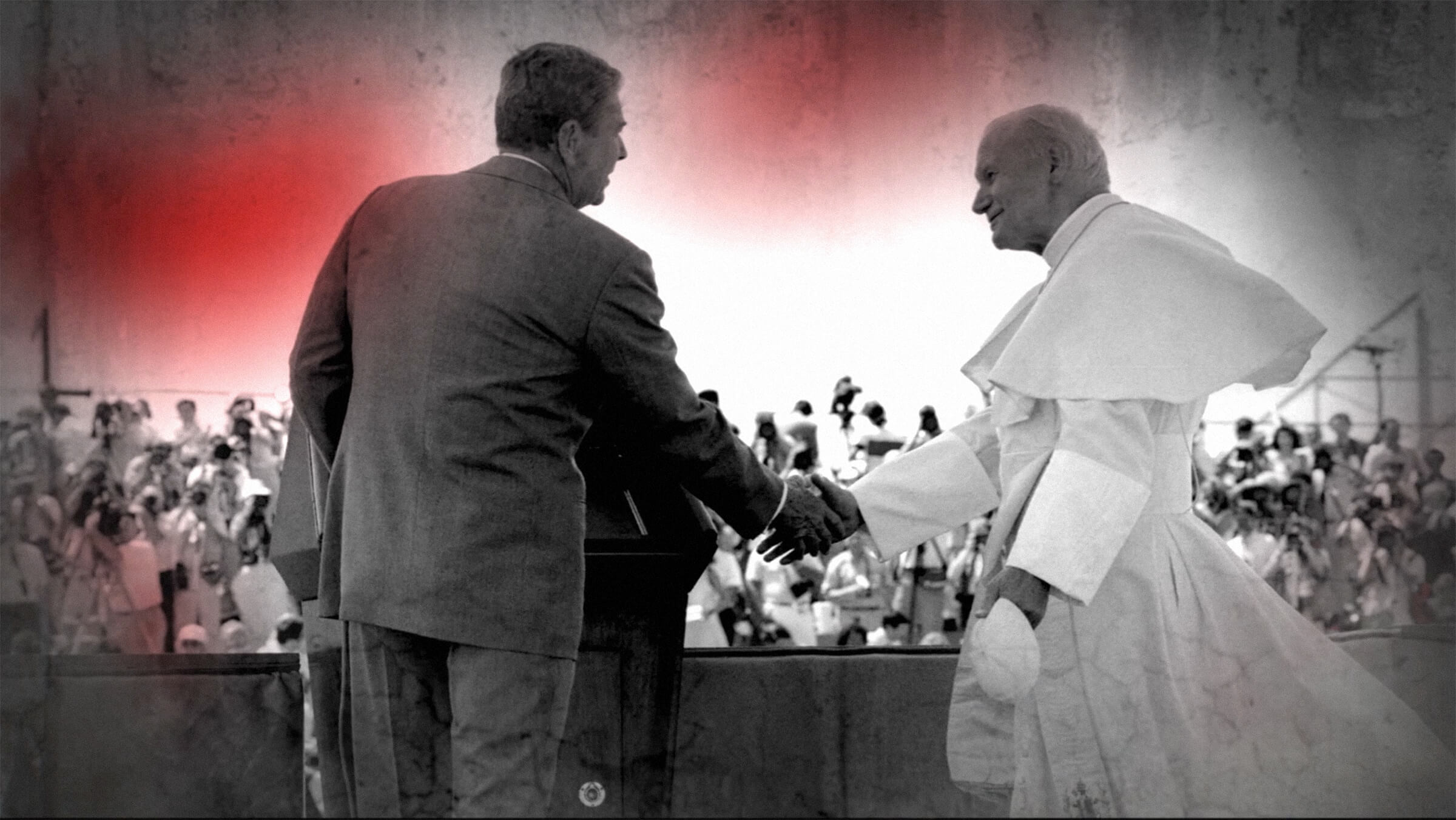 “All the world’s a stage and all the men and women merely players,” says Shakespeare in “As You Like It.” For people of faith, the world is God’s stage, but we aren’t merely players. We are partners with God as he acts through the human beings He has created.

In theaters for one night only Nov. 6, the feature-length documentary “The Divine Plan” (Nexus Media) begins by introducing its two main players, both actors who knew how to work a crowd: St. John Paul II and President Ronald Reagan. God gave them the biggest stage possible, and they took to it with consummate skill.

They used it, moreover, it to achieve positive change, namely, the end of the Cold War and the fall of Soviet communism. The question posed by filmmaker Robert Orlando is this: Was their work toward those ends just something that happened by accident or part of a divine plan?

Ironically, it was two acts of violence that came to link pope and president: unsuccessful assassination attempts only six weeks apart.

March 30, 1981, saw John Hinckley Jr. open fire as Reagan exited the Washington Hilton Hotel after a speaking engagement. On May 13, 1981, St. John Paul was making his way around St. Peter’s Square greeting pilgrims from the open-air popemobile when Mehmet Ali Agca, a Turkish national, opened fire, wounding the pontiff. As men of faith, both took their survival as a sign that God was not finished using them to do good in the world.

The first meeting between Reagan and the pope took place in June 1982, even before the president made history by appointing the first U.S. ambassador to the Holy See. (The United States had had consular relations with the Papal States from 1797 to 1867 and various presidents in the interim had sent personal envoys to the Vatican.)

When the Solidarity movement in Poland, led by Lech Walesa, picked up speed, Reagan and St. John Paul knew the time was ripe to take real steps toward ending the Cold War. Around the same time, change was happening in the Soviet Union with the rise to power of Mikhail Gorbachev and his promotion of reforms.

Bill Casey, a Catholic who headed the Central Intelligence Agency under Reagan, became the go-between in their behind-the-scenes collaboration, a partnership that came to be dubbed “The Holy Alliance.” It was spurred on by a shared outlook on the moral dimensions of the Cold War, especially communism’s disregard for the inherent dignity of the human person.

“The Divine Plan” features a wide variety of interviews. Some are with Church insiders like Auxiliary Bishop Robert E. Barron of Los Angeles, Cardinal Timothy M. Dolan of New York and papal biographer George Weigel. Others are with political authors such as Anne Applebaum and John O’Sullivan. Especially interesting is input from Richard V. Allen, who began as Reagan’s foreign policy guru from 1977 to 1980 and was then appointed as his first national security adviser.

The poorly handled visual aspect of “The Divine Plan,” however, distracts from the fascinating information with which it’s filled. The graffiti-like graphics are simplistic and overused. Transitions from art to interviews are jarring and rough. The sets for the interviews were dark and thus fail to reflect the hopeful subject matter of the film.

Even so, this is a wonderful addition to the history of relations between the United States and the Catholic Church, especially in a time when religion and politics are both so divisive. By presenting the way these two leaders put their faith into practice, the movie challenges each viewer to “contribute a verse,” as poet Walt Whitman put it, to the betterment of the world by discerning and following God’s plan.

Does the documentary answer its central question? Opinions may differ. But the quote from St. John Paul with which “The Divine Plan” closes speaks for itself: “A coincidence,” he remarked, “is what a believer calls divine providence.”

For screening information, go to: thedivineplanmovie.com.

The film contains mature themes and some potentially disturbing historical images. The Catholic News Service classification is A-II — adults and adolescents. It is not rated by the Motion Picture Association of America.