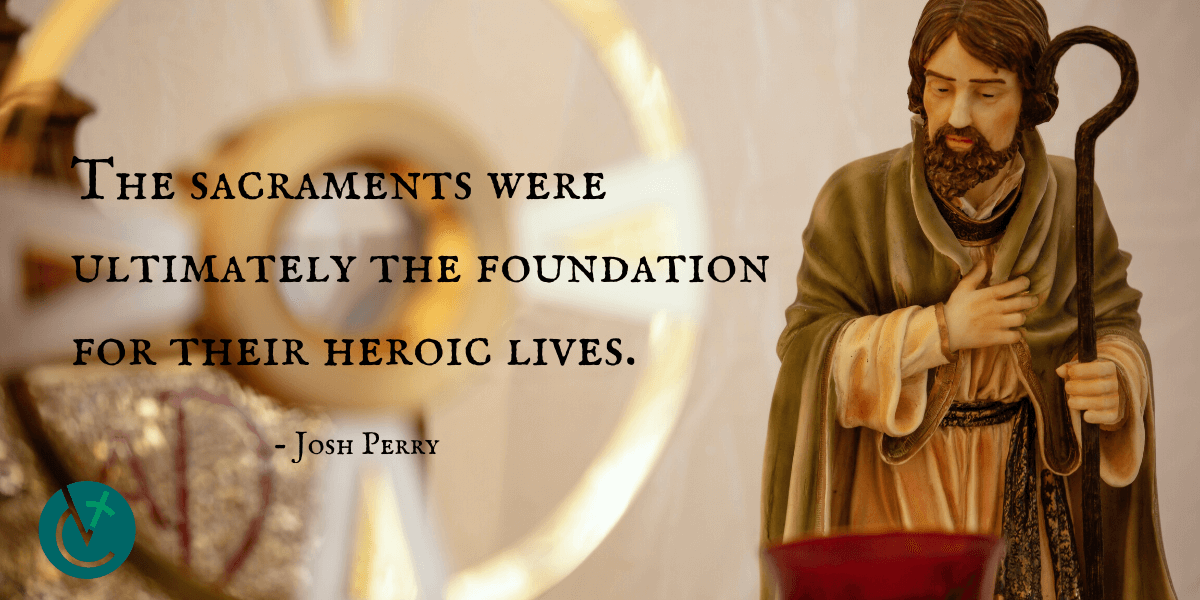 As the Diocese of Burlington celebrates “A Year with the Saints,” Vermont Catholic magazine is looking at saints through different “lenses” to see how saints have influenced different aspects of Catholic life. In this issue, we look at saints that have had an impact on liturgy.

The regulation of the liturgy was and is the responsibility of the pope and bishops, yet saints that promoted the connection between liturgy and life and the practice of devotions come from all walks of life.

“Throughout history, many saints were exemplars of linking liturgy and life, helping the faithful connect the fruits of the liturgy to their everyday life,” explained Josh Perry, director of worship for the Diocese of Burlington.

Many saints encouraged the extension of liturgical celebration by promoting various devotions in the private lives of the faithful. “Certainly, in particular moments throughout history, saints were responsible either for the development of how the Mass and other sacraments were celebrated or for a deeper understanding of liturgy,” he said, pointing out Pope St. Gregory the Great (540-604), St. Thomas Aquinas (1225-1274), Pope St. Pius X (1835-1914) and Pope St. John XXIII (1881-1963).

St. Elizabeth Ann Seton encouraged people to make daily offerings of prayer to Jesus in the Blessed Sacrament and wrote about the how the Presence of Christ in the Eucharist consoles those facing difficulty. St. John Neumann wrote about the Eucharistic sacrifice and how persons can join themselves to the Eucharistic sacrifice: “What great glory would be given to you [Jesus] here on earth, if every heart were an altar on which every human will were laid in perfect conformity with your will.”

Both their own example of their love of the Eucharist in the Mass as a support in their life’s difficulties was an example for their contemporaries and for people today, Perry said.

Pope St. Gregory the Great was considered the first medieval pope who made many changes to the way the Mass was celebrated, changes that survive to this day. One such change was the location of the Lord’s Prayer, which is said just after the Eucharistic Prayer. “Gregory is probably best known for his establishing and promoting the use of plainchant (more commonly referred to as Gregorian Chant) in the liturgy which for centuries and even to this day provides the musical ‘backbone’ of the liturgy,” Perry explained.

Although St. Thomas Aquinas was never pope, he was commissioned by Pope Urban IV to compose Eucharistic hymns for the newly established Feast of Corpus Christi. “Thomas Aquinas, ever the theologian, taught Eucharistic theology through these hymns and his other writings,” he said.

The Tantum Ergo and O Salutaris Hostia, which are still sung, are taken from one of those Eucharistic Hymns as is the Pange Lingua, which is traditionally sung on Holy Thursday.

Pope St. Pius X worked to reform the liturgy during his pontificate. He renewed the place of the Eucharist in the Church by lowering the age of First Communion and promoting daily communion in the lives of Catholics, saying that the Holy Communion “is the shortest and safest way to Heaven.”

“The saints are known most especially for how they lived their lives. For them, all of the sacraments were not simply aids that provided support for living such heroic virtue,” Perry said. “The sacraments were ultimately the foundation for their heroic lives, for through the sacraments, they received the grace of God to live in such a way.”

He suggests that Catholics recognize that Mass isn’t just an event that affects them for one hour on Sunday morning. “Rather, the effects of the Mass continue through the week in our life outside of the church. We connect more deeply to those effects through our own personal prayer and devotion,” he said, suggesting that prayer and devotion, whether it be the rosary, prayer before the Blessed Sacrament, the Divine Mercy Chaplet, Lectio Divina or others “help us keep that relationship with Christ expressed and affected at … Sunday Mass real and alive during the week.”

Lives then truly became a continual sacrifice of praise and thanksgiving, he added. “And that prayer life should always make us yearn to return to the liturgy.”

Many saints continued the effect of liturgy through their own private prayers and devotions. “That’s why so many saints were known for promoting prayer, piety and devotion outside of the liturgy,” Perry said. “Their devotion and personal prayer life were seen as extensions of their experience of liturgy, not separated from the liturgy. These devotions occurred in everyday life. These devotions also call us, in our everyday life, back to the liturgy to be continually refreshed and renewed in grace.”

Ultimately, there was “this amazing integration in the lives of saints between liturgy, their personal prayer and devotion and their everyday life.”