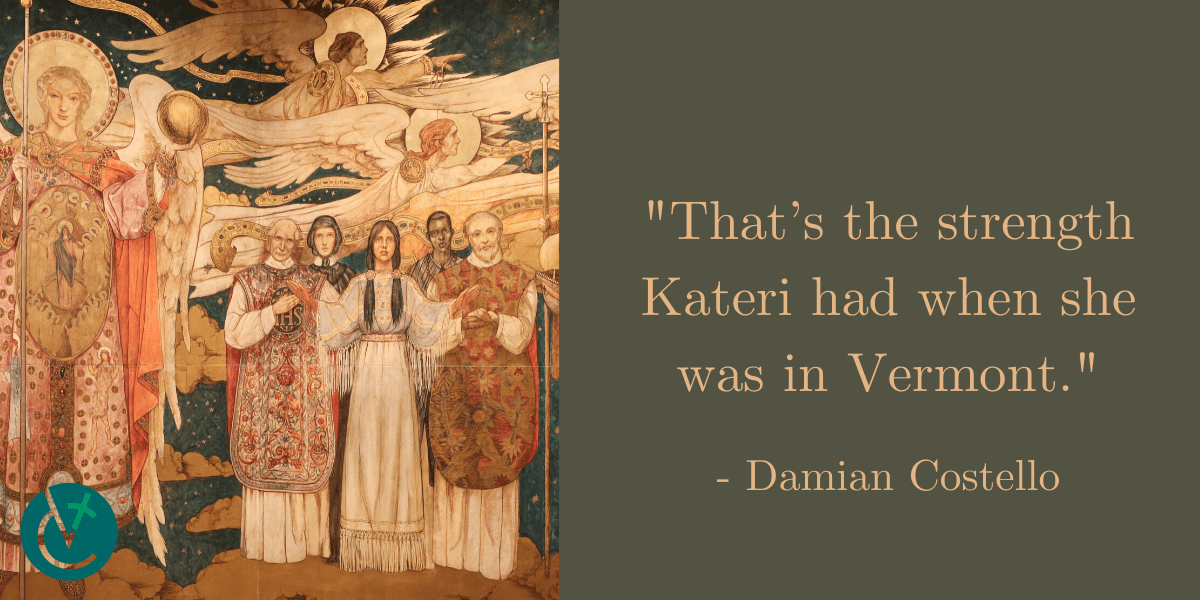 When I think of St. Kateri Tekakwitha’s time in Vermont, I think of strength.

It was the fall of 1676. The sounds of migrating birds filled the Lake Champlain basin, what the Mohawk call Caniadari Guarunte, “the door to the country.” Morning brought the sharp embrace of frost and the unmistakable smell of fallen maple leaves.

Not that you would see Kateri’s strength at first glance. Smallpox scars checkered the young woman’s face. She was partially blind, the source of the name Tekakwitha, meaning “one who walks groping for her way.”

Kateri’s mother was a captive from an enemy nation, and both her parents died when she was four. That Easter, she accepted “The Prayer” and was baptized, causing many in her longhouse to look down upon her.

Despite her appearance, Kateri was full of strength those fall days in Vermont, that peculiar strength that emerges in the young when they discover who they are called to be.

A few weeks earlier, visitors brought word of a new Mohawk village centered on The Prayer. Kahnawake, “by the rapids,” was across the river from Montreal; captives like her mother — Algonquin, Erie, Huron and European — filled the village, and Jesuits ministered in the church. There Kateri could practice her Catholic ways without impediment.

Kateri joined her brother-in-law and a Huron friend and made the long journey from her home village west of Albany, New York. Her family pursued her. Once, Kateri barely escaped her passing uncle by hiding in the underbrush. They travelled in fear, knowing the search party could overtake them at any time.

Until they got to Vermont. Fort Ste. Anne on Isle LaMotte was the functional border of New France, and there was now no doubt that Kateri had escaped those that pursued her. There was no turning back from who she was to become, and I like to think that as Kateri passed Sandy Point, where St. Anne’s Shrine is now, you could see how her strength would fully flower in her new life, how in Kahnawake she would find a new sisterhood of like-minded women dedicated to fostering their relationship with Christ.

The Jesuits urged moderation to the newly baptized; Kateri and her sisters would not be held back. They modeled a life of prayer and discipline after the French nuns they saw, taking vows of chastity, fasting and practicing bodily mortification. Kateri’s life of asceticism was not a retreat from the world but complete immersion into that which one was made for.

In this Kateri is perhaps most Native. In Western society, we have a tendency to see bodily sacrifice as life-denying. In her culture, offering oneself to the spirits is the most life-affirming act one can make. People regularly fast for days in ceremony. In the Sun Dance, the great summer ceremony now found all across North America, dancers give their own flesh, not because it is evil or corrupt, but because it is the purest gift that one can give back to the creator. Prayer and ceremony are done not to escape the world but for full human flourishing, that the people may live.

And in offering herself Kateri is most Christian. Jesus came to give full life that transforms all and makes all things new by laying down His life. “No one takes it from me,” He said after curing a blind man, “But I lay it down on my own. I have power to lay it down, and power to take it up again” (Jn 10:18).

Kateri did too, and it is in death that her power was most evident. It was Holy Week in 1680. She lay dying and in her longhouse, and the whole village came to see her receive communion. She waited until all her sisters were with her before she died. Shortly after, her face shone with radiant light, her scars gone. Kateri still lays there in Kahnawake, her power surging in and out of the old church, like the rapids outside in spring, brighter than any of the lights of Montreal flickering in the distance.

That’s the strength Kateri had when she was in Vermont.

—Damian Costello is a member of St. Augustine Parish in Montpelier and the author of “Black Elk: Colonialism and Lakota Catholicism.”