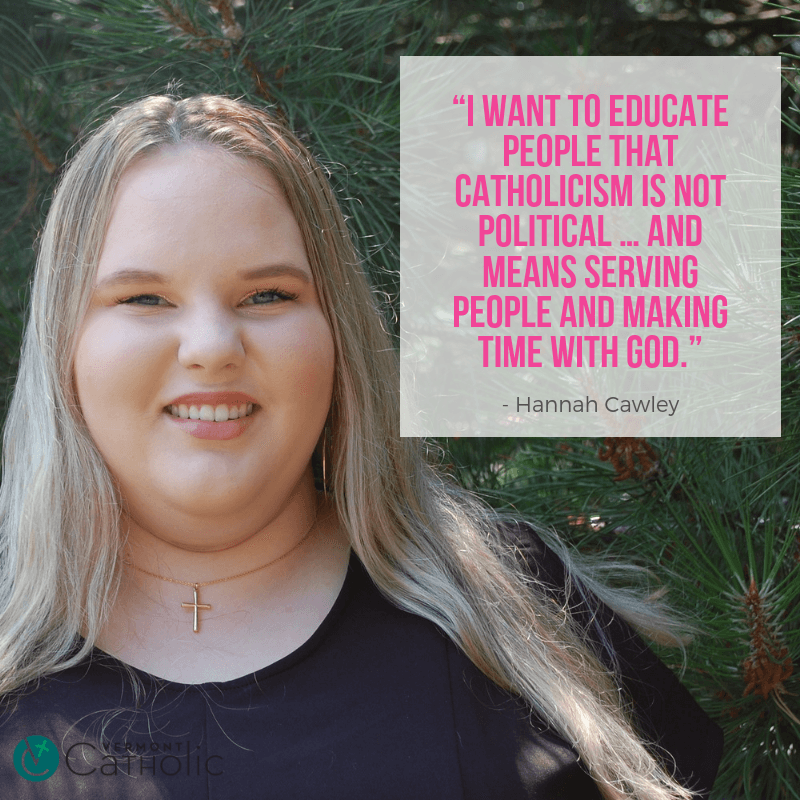 Hannah Cawley defines “disciple” as someone who follows God and spreads God’s word to other people.

And that’s just what this 16-year-old plans to continue to do when she is in Washington, D.C., as a legislative page.

A parishioner of St. Francis Xavier Church in Winooski, Hannah converted to the Catholic faith earlier this year. As a student at Mater Christi School in Burlington and Rice Memorial High School in South Burlington, she had identified as Catholic because she went to school Masses and studied the Catholic faith though she had attended a Congregational church.

At Rice she was heavily involved in campus ministry and enjoyed talking with her peers about being Catholic.

For her, being Catholic is about caring about other people and making time for God every day.

As a busy teen, she makes time for Sunday Mass, morning and night prayers and the rosary, carving out quiet periods to talk to God, to reflect and to “be steered in the right direction,” she said.

Two of the biggest challenges to being a young disciple, Hannah said, is making time every day for God and dealing with people who don’t understand Catholicism and become judgmental. “I want to educate people that Catholicism is not political … and means serving people and making time with God,” she said.

The only child of Kathy and Ed Cawley of Colchester, Hannah has been involved at Rice with the rowing team, debate club, Model UN, Scholars Bowl, drama and student government. She is an honor roll student and participated in a school service trip to Peru and in the Hugh O’Brien Youth Leadership program.

Elisabetta Anelli, Rice campus minister, said Hannah lives her faith through continuing to learn and serve others. She also seeks to find how her faith comes to bear on current events. “She is constantly asking ‘what does the Church have to say about this? How do Catholics see this?’”

Hannah enjoys travel and had a summer job assisting at a children’s summer art camp.

While in eighth grade, she was a Vermont legislative page.

She would like to become a lawyer and work in government and politics. “As a young disciple Hannah is following after Christ, both in seeking the truth and in using her gifts and talents for the service of others, especially through her passion for government and law,” Anelli said. “Hannah knows what she wants and is willing to work hard to achieve her goals. She is passionate about government, and it shows not only in her attentiveness to current events but also through her ability to organize people to get things done.”

While serving in the nation’s capital as a page from September until sometime in January, Hannah hopes to get other pages to go to Sunday Mass with her and to meet other Rice students at the annual March for Life there. She’ll make time for prayer, celebrate Christmas before heading home to Vermont for a family gathering and even put up an Advent wreath in her room “so I can be reminded of my faith,” she said.

And because the pages will have limited phone access and likely will miss their families, she hopes to be “someone other people can lean on” while away from home.

“God has given me this opportunity” to be a page, she said, “and I need to use it to the fullest.”

Her advice to other young people is “follow your faith, even if people disapprove.”

Being Catholic is who Hannah Cawley is. “God made me who I am. He cares if you commit to the faith, not if you have amazing credentials.”

For now, she is planning to see where life takes her. “I have faith God will lead me in the right direction,” she said.