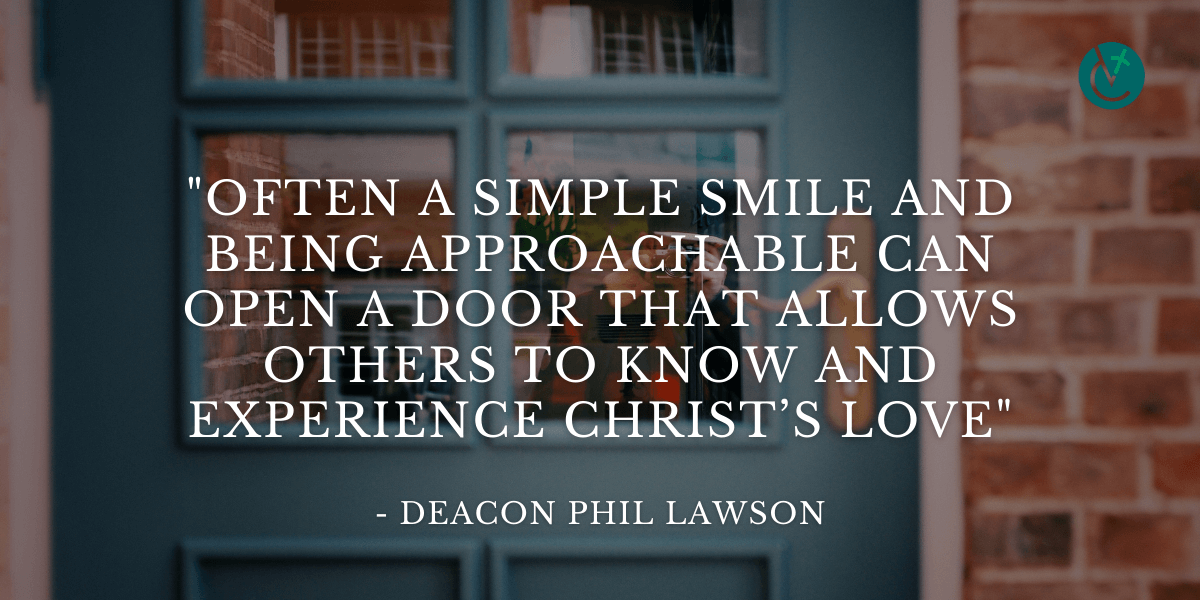 A smile, an approachability and a conversion

It was the fall semester of my junior year of college, on a public school campus with some 28,000 undergraduate students.  Amidst the sheer size it was easy to get lost in the numbers.

At the time, Professor Crawford was the instructor of “History of Christianity: 1500- Present.”  It was a decent-sized class, yet he would call out the attendance roll at the beginning of each class. What struck me was that instead of just putting a checkmark next to your name when you responded, he would actually make eye contact with you and smile as he did so. Right from the first class you knew that you were someone whom this professor cared about and even took a personal interest in. He made himself approachable.

At that time, I was attending a non-denominational church eagerly devouring the Bible and whatever I could read on Christianity, hence my signing up for this course, even though I was then working on a communications degree. Professor Crawford, I was to learn, was a man of faith with a deep appreciation for Christian history and the Church. Throughout that semester, he taught, challenged and encouraged us with countless references to the primary sources. He took the time to patiently answer questions, many of which I brought to him via email or in his office.  I also know now that he prayed for his students, though he couldn’t share this publicly.

That class was one of the hardest of my undergraduate years but also the most valuable. Memorably, we had to write a final 8-10-page paper on some aspect of the history of Christianity.  With his encouragement, I wrote mine around the theme of comparing the modern non-denominational church with what I called the traditional church which I identified as Catholic, looking at areas such as history, authority, the Bible etc.

That’s a very broad area of focus, and when I asked him if I should limit my focus, he wisely encouraged me to keep going. In the end, I had a 49-page paper. And in the fruits of my research, interviews, many prayers and subsequent encounters with Catholics the Lord brought into my life, I was on my way to the Catholic Church.

The story of that initial smile is one I’ve shared with religious educators over the years.  How crazy is it that I still remember that smile and approachability more than 20 years later!  Our young people may not recall a single thing you teach them — but they will remember the way you treated them, the way you looked at them, the way you revealed Jesus Christ to them.

And this doesn’t just apply to our religious educators but to all Catholics.  Do our co-workers see that love of Christ, that personal concern and attention, that approachability, that smile in us?  Every person the Lord brings into our life is someone, just like us, who needs to know they are loved, that God is true, that there is a way of life (Catholicism) that will lead to the peace, meaning and joy that every human heart aches for.

Over and over we hear how evangelization, the sharing of the Good News of Jesus Christ and His Catholic Church, begins with an encounter and the relationship that flows from it.  That encounter with Professor Crawford, the subsequent relationship and eventual friendship helped evangelize me and bring me home to the Catholic Church.

Recently I was at our local auto service shop. The co-owner mentioned she had been talking about me that morning: A customer had mentioned he was going through a marriage separation and reaching out for help. She had told him, “There’s this deacon at the local church who is just so friendly, always smiling and easy to talk too.” She recommended he get in touch with me. How often a simple smile and being approachable can open a door that allows others to know and experience Christ’s love!

A number of years ago Cardinal Timothy Dolan of New York had noted that “the new evangelization begins with a smile.”  How true that can be.  A smile, an approachability, and a conversion.  Praise God.  Let us go and do likewise.

—Deacon Phil Lawson is the executive director of evangelization, catechesis, divine worship, marriage and family and respect life for the Diocese of Burlington.  He can be reached at plawson@vermontcatholic.org.