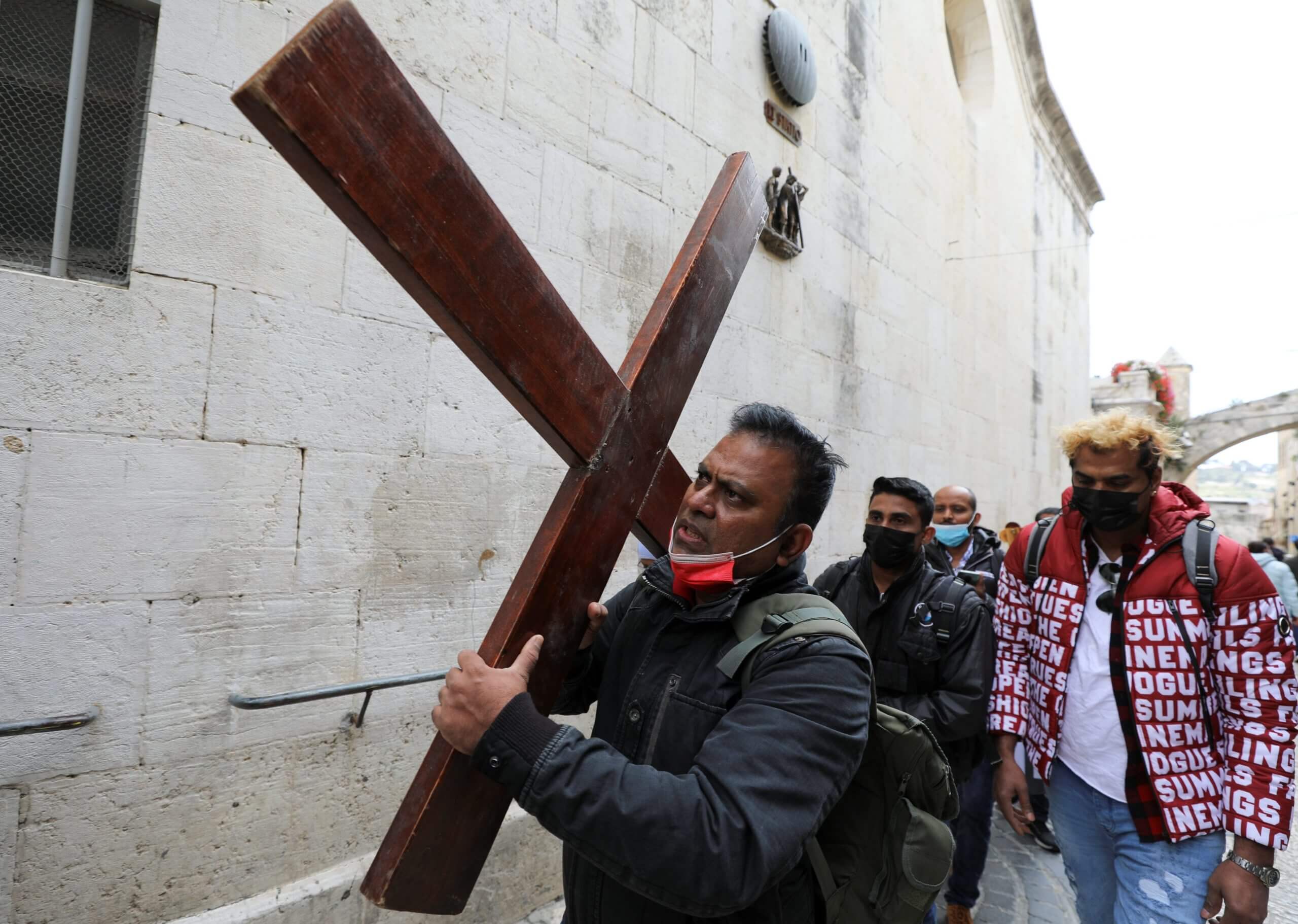 Photo Credit: CNS/Ammar Awad, Reuters - A man carries a large wooden cross during a Good Friday procession on the Via Dolorosa, "The Way of Sorrow," the path believed to be taken by Jesus to his crucifixion, in Jerusalem's Old City April 2.

As Pope Francis presided over the Liturgy of the Lord’s Passion, the preacher of the papal household called on bishops and all Catholics to examine their consciences for ways they may be harming the unity of the Catholic Church.

Pope Francis presided over the liturgy April 2 at the Altar of the Chair in St. Peter’s Basilica, but as is customary, the preacher of the papal household, Cardinal Raniero Cantalamessa, gave the homily as the pope and more than two dozen cardinals listened.

“Fraternity among Catholics is wounded,” the cardinal said.

With only about 150 people present because of Covid-19 restrictions, Cardinal Cantalamessa clarified that he was speaking “of the human element of it, because no one will ever be able to tear the true tunic of Christ, his mystical body animated by the Holy Spirit. In God’s eyes, the Church is ‘one, holy, catholic and apostolic’ and will remain so until the end of the world. …

Fomenting division is the work par excellence of the one whose name is ‘diabolos’ that is, the divider, the enemy who sows weeds, as Jesus referred to him in the parable” in Matthew’s Gospel.

The Catholic Church is called to be a force for the unity of all Christians, he said, and so Catholics must pray and work for the peace and unity Jesus willed for His disciples.

The liturgy began with Pope Francis, assisted by two monsignors, prostrating himself on the floor of the basilica before the altar. Later, after the reading of the Passion according to St. John, the pope also led the adoration of the cross.

Just a few hours after the evening liturgy, the pope was scheduled to preside over the Stations of the Cross in St. Peter’s Square. The meditations for the service were written by children and adolescents and reflect on the crosses many children in the world bear, especially during the coronavirus pandemic.