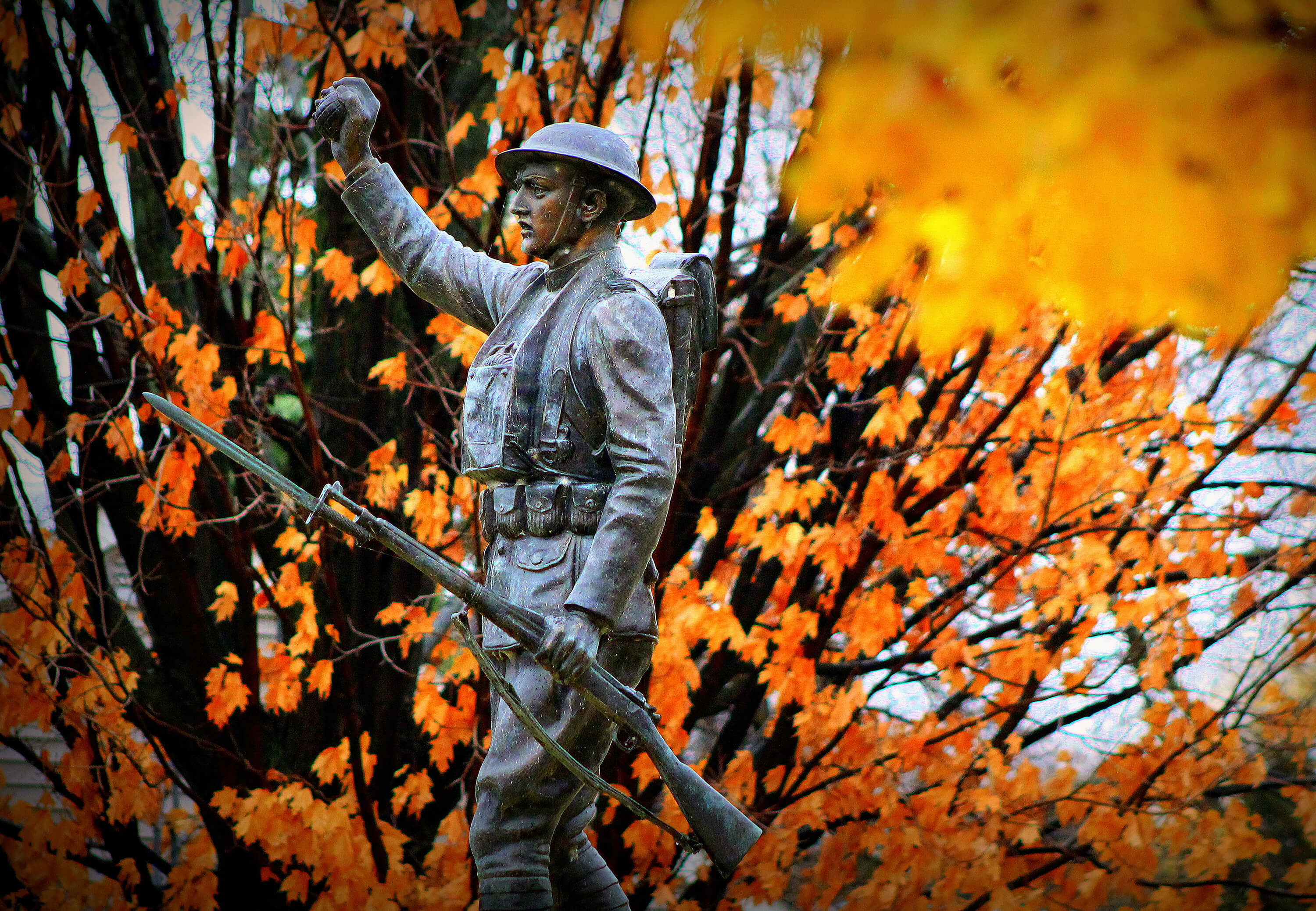 Photo Credit: CNS/Brad Birkholz - A statue of the "Spirit of the American Doughboy" is pictured in Appleton, Wisconsin. The statue is a pressed copper sculpture by E. M. Viquesney, designed to honor the veterans and casualties of World War I. “In 1914, five months into WWI, Pope Benedict XV suggested a temporary ceasefire to the fighting for the celebration of Christmas. Soldiers in the trenches took heed, though their countries would not make it official,” writes Mary Morrell.

Humanity is the true gift of Christmas

“Word of the Father, now in flesh appearing. …”   O Come All Ye Faithful

Recently I read a sentiment about Christmas that I have heard often over the years, from family, friends and even strangers as they go about their Christmas shopping: “I hear that in many places something has happened to Christmas; that it is changing from a time of merriment and carefree gaiety to a holiday which is filled with tedium; that many people dread the day, and the obligation to give Christmas presents is a nightmare to weary, bored souls; that the children of enlightened parents no longer believe in Santa Claus; that all in all, the effort to be happy and have pleasure makes many honest hearts grow dark with despair instead of beaming with good will and cheerfulness.”

Many of us would shake our heads in agreement and imagine that the sentiments above were from someone, like us, who has experienced the contemporary morphing of Christmas into a marketing holiday.

Surprisingly, the quote is from the 1934 work, “A Plantation Christmas,” written by Southern author and Pulitzer Prize winner Julia Peterkin. I never imagined that Christmas, almost 85 years ago, would be a similar source of dread and obligation as it is for many today. Living at light speed is obviously not the only reason we lose sight of the true meaning of Christmas.

In 1914, five months into WWI, Pope Benedict XV suggested a temporary ceasefire to the fighting for the celebration of Christmas. Soldiers in the trenches took heed, though their countries would not make it official.

A story on history.com relates: “Starting on Christmas Eve, many German and British troops sang Christmas carols to each other across the lines, and at certain points the Allied soldiers even heard brass bands joining the Germans in their joyous singing.

“At the first light of dawn on Christmas Day, some German soldiers emerged from their trenches and approached the Allied lines across no-man’s-land, calling out “Merry Christmas” in their enemies’ native tongues. At first, the Allied soldiers feared it was a trick, but seeing the Germans unarmed they climbed out of their trenches and shook hands with the enemy soldiers. The men exchanged presents of cigarettes and plum puddings and sang carols and songs. There was even a documented case of soldiers from opposing sides playing a good-natured game of soccer. …

“During World War I, the soldiers on the Western Front did not expect to celebrate on the battlefield, but even a world war could not destroy the Christmas spirit.”

While more than a century has passed since the Christmas Truce of 1914, and the passing of years has certainly not improved our cultural Christmas, our growing spiritual maturity should enlighten us to the true gift of Christmas, demonstrated by soldiers so long ago — our humanity.

God deemed humanity gift enough to be incarnate on the first Christmas as the Christ child, who taught us how to be human, how to be in relationship with God and others, how to love and create peace in the world.

Christmas is the celebration that reminds us of how we were gifted. The rest of the year is the time when we are called to live the gift.