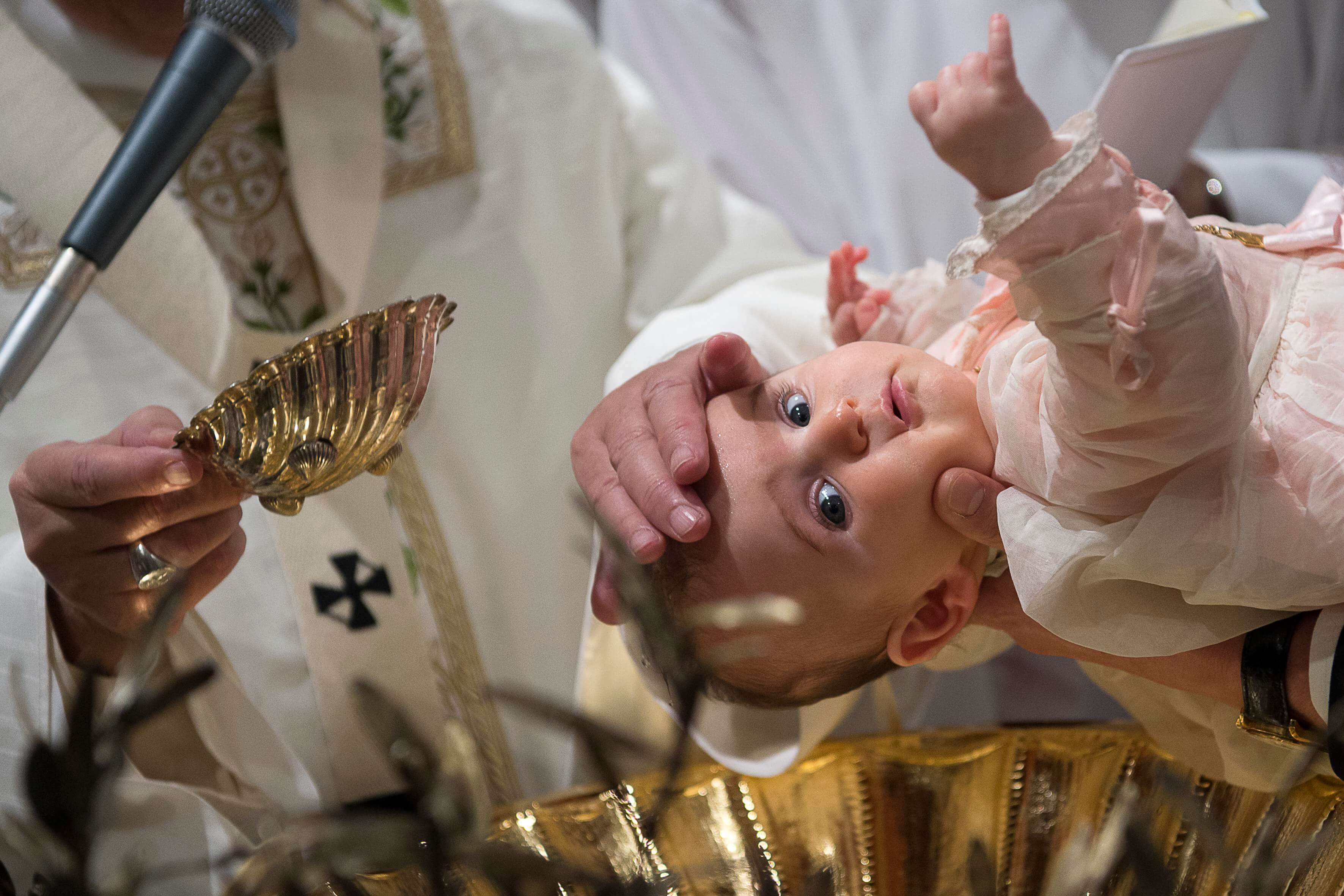 Photo Credit: CNS/L'Osservatore Romano, handout - Pope Francis pours water over the head of a baby as he celebrates the baptism of 26 babies in the Sistine Chapel at the Vatican.

I never wanted to be a mom. I assumed that I would be one, but I wasn’t a girl who dreamed of motherhood. I’ve never been particularly smitten with babies. As a young woman, I was content to enjoy my early years of marriage child free. I even told myself that if I couldn’t have kids for some reason, that would be OK.

A Type A personality who relishes in schedules, organization and color-coding, perhaps this mindset was a subconscious expression of the fear I had for the loss of control that accompanies motherhood.

When my husband and I learned Natural Family Planning, we approached it as we had any class before, with intense studiousness and a desire to succeed. (I’m not sure what success means in this context, but that was our attitude.) We found that this faith-motivated, natural practice wasn’t providing the peace, love and fruitfulness that it promised in any sense of the terms.

I stressed about remembering to check and record symptoms; I felt guilty when I forgot; I was consumed with thinking about whether we were or were not in the best position to bring a baby into the world. I wanted to get it right. I thought understanding Natural Family Planning allowed me the control to do so.

Realizing that obsessions with charts, temperatures and times were not improving our marriage or personal faith journeys, we attempted a different approach, relinquishing some of the control onto which we so tightly held. Maybe it was not the best time to bring a baby into our lives, perhaps it never would be, but that wasn’t for us to determine. We stopped trying to decide if we should have a baby and simply lived open to the possibility.

We still pondered questions about parenthood: How will a baby affect our careers, our marriage, our lifestyle? Are we financially able to support a child? Is my health sufficient to grow and carry a baby? How will I uphold my professional ambitions alongside motherhood?

The difference now was that we did not compel ourselves to produce definitive answers to these queries and our willingness to welcome a child wasn’t dependent upon it. Sometimes the response was, “We don’t know.” That was OK.

The freedom that followed this open-to-life-without-trying-to-control-it approach was refreshing, like unloading a burden one was never meant to bear.

I hadn’t before approached anything in life with such openheartedness. Some might call it whimsical. For me, it was profoundly religious. Was this what it meant to place full faith in God? It’s certainly the closest I have ever come to complete surrender of my will to live in the Holy Mystery.

I was fortunate to experience a smooth pregnancy and delivery, but that did not mean it was without moments of doubt and fear. St. Joan of Arc’s words, “I am not afraid. I was born to do this,” became a familiar mantra, and I believed it. In learning to lose control, I had found comfort and strength.

I don’t think I would have transitioned so comfortably into the chaotic role of mother (a full four weeks earlier than planned!) if it hadn’t been for the preparation that the Spirit started in me many months before. The Spirit urged me to let go of certainty and solid plans, to embrace each moment as it is, not as I intend it to be.

For a new mom, that is a worthy lesson (as are most lessons of the Spirit). Life may not be how I intend it ever again. Schedules are now suggestions and organization is an afterthought. My affinity for color-coding might have some redeeming value when the baby starts to learn colors.

For now, I surrender to the baby’s will. It is difficult much of the time, but made easier by the practice of first surrendering my will to God’s.

Motherhood brings with it many wonderful things; control is not one of them.