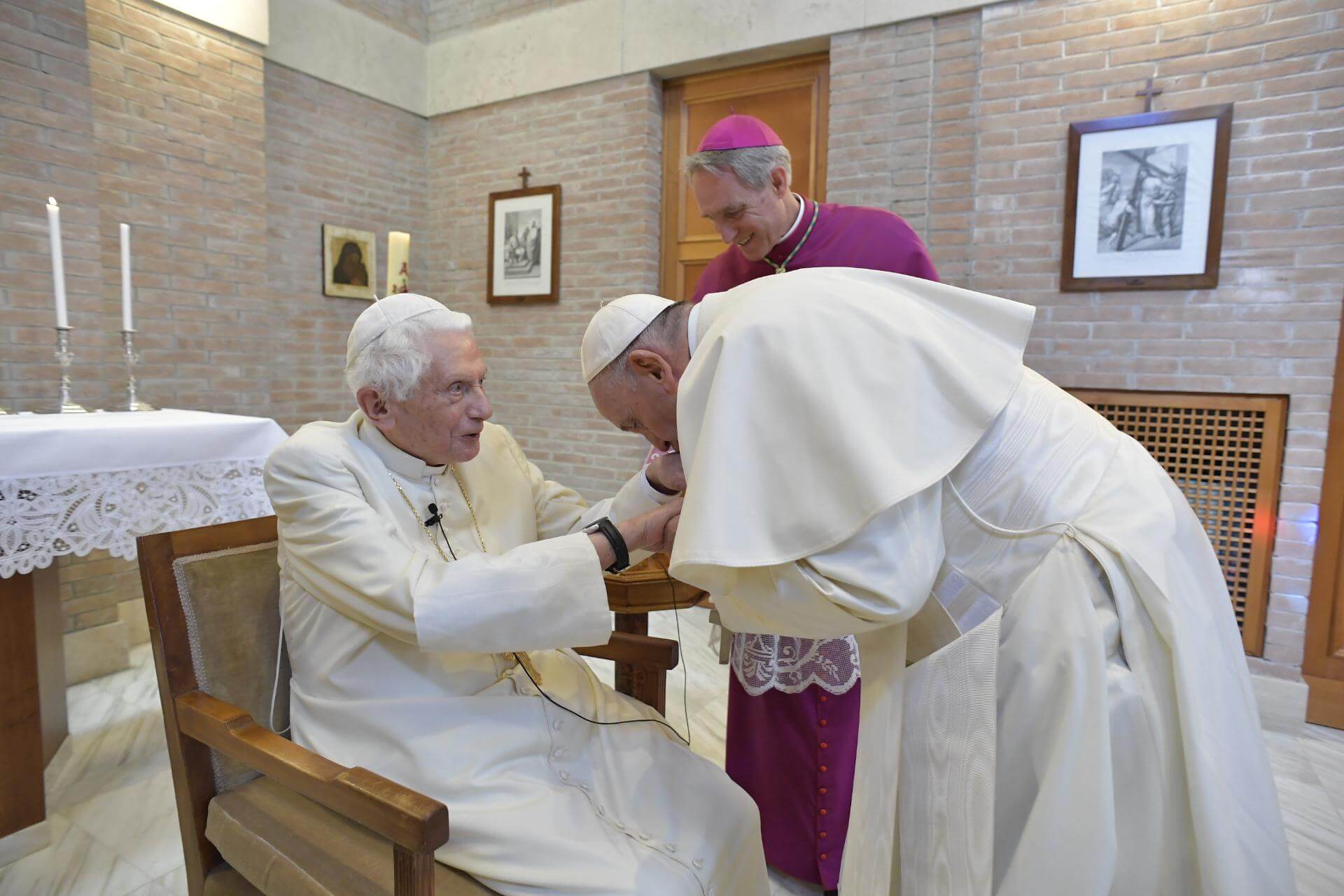 Photo Credit: CNS/Vatican Media - Retired Benedict XVI and Pope Francis exchange greetings at the Mater Ecclesiae Monastery earlier this year. Pope Benedict recalled Jesus’ teaching in his encyclical and first social document, Caritas in Veritate. “Charity is the main path of the Church's social doctrine. Every responsibility and commitment outlined by this doctrine is attuned to charity which, according to Jesus' teaching, is the synthesis of all the Law,” he wrote.

Love is at the heart of the Church’s social mission

My grandparents, on my mother’s side, were Syrian immigrants. They came here as young teens on boats overflowing with hope, not speaking the language but bringing with them the values of hard work and the importance of family.

After he married my grandmother, my grandfather ran a fruit and vegetable market in downtown Albany, New York. He loved the store and being able to spend time talking to customers. Times were hard, and when people couldn’t pay their bill, he would let them run a tab so they could have food for their families.

Eventually, that happened so often that he couldn’t pay his own bills and had to close the market. But he was never sorry that he helped the poor.

My great uncle, also a Syrian immigrant, bought some old abandoned buildings in the city. In the winter, he would turn on the heat and open the rooms for the homeless. Whoever needed to get out of the cold, my uncle would find a place for them.

My aunt, who had a small luncheonette, never turned away a homeless or hungry person. She made up small boxes of food every day, setting them aside for those who needed sustenance and a reaffirmation of their value as persons.

No one in my family was rich, at least not with money, but they were rich in generosity, joy and compassion and a refusal to judge others because of hardship. They had been there themselves, and they knew that poverty should never be the measuring stick of human dignity.

They also had their faith. My grandfather was known for the small, dog-eared Bible he read every night, written in Arabic but containing the same Gospel of Jesus Christ that is in my English language Bible; the Scriptures in which Jesus summarizes the whole of law in the two greatest commandments: love God and love your neighbor — commandments that didn’t include any exclusions about where neighbors lived or the color of their skin.

Pope Francis, too, calls us to that same love. “Charity is at the heart of the Church, it is the reason for its action, the soul of its mission,” he has said.

He reminds us, through the words of his first apostolic exhortation, Evangelii Gaudium, of the teachings of Jesus who came for the poor and disadvantaged in body and spirit, not for the arrogant or self-promoting and certainly not for the good of any particular nation or any particular race.

This divine preference for the poor, writes Pope Francis, “has consequences for the faith life of all Christians, since we are called to have ‘this mind … which was in Jesus Christ’ (Phil 2:5). Inspired by this, the Church has made an option for the poor which is understood as a ‘special form of primacy in the exercise of Christian charity, to which the whole tradition of the Church bears witness.’

“… We are called to find Christ in them, to lend our voice to their causes, but also to be their friends, to listen to them, to speak for them and to embrace the mysterious wisdom which God wishes to share with us through them.”

This teaching, which reflects the principal of solidarity defining, in part, the Church’s social justice teaching, stresses the inherent dignity of every person, of all persons, as children of God. It can never be, as my grandparents and family modeled, “us” and “them.” It must be “we.”

Recalling the words of St. John Paul II, Pope Francis stresses that only love “will ensure that ‘in every Christian community the poor feel at home. Would not this approach be the greatest and most effective presentation of the Good News of the kingdom?’”