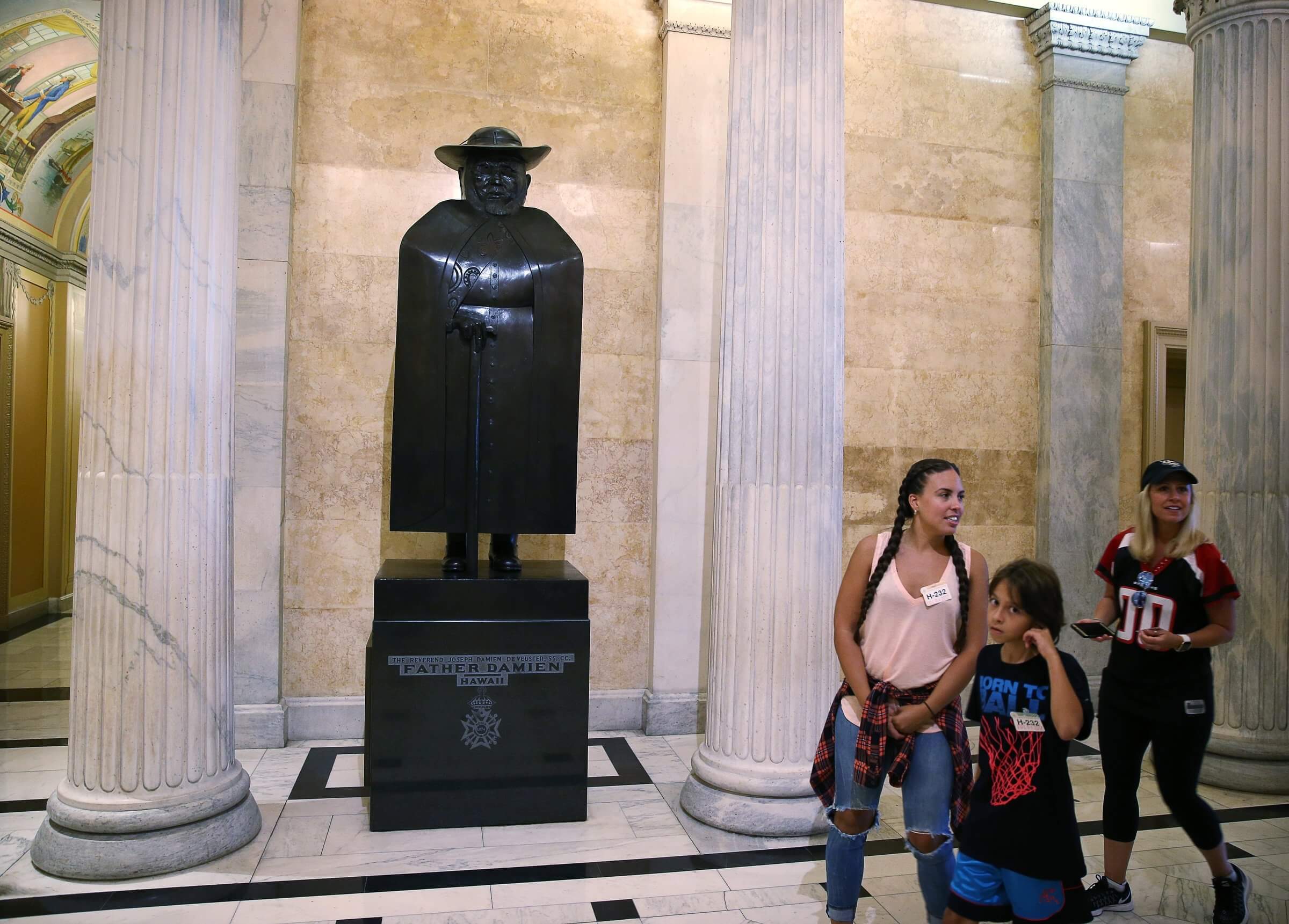 Photo Credit: CNS/Tyler Orsburn - St. Damian served the lepers on the island of Molokai in Hawaii. A sculpture of St. Damien of Molokai is seen at the U.S. Capitol in Washington in this 2017 file photo.

On saints and suffering

“I have told you these things, so that in me you may have peace. In this world you will have trouble. But take heart! I have overcome the world” (Jn 16:33).

Every saint suffers. Indeed, suffering is an integral part of becoming a saint. In John 21 Jesus gives St. Peter the opportunity to reverse his three denials that occurred in the courtyard during the trial of Jesus by the Sanhedrin. Jesus asks Peter three times “Do you love me more than these?” and Peter responds, “Yes, Lord, you know that I love you.”

Jesus will give Peter three commands that have to do with him being the first universal shepherd (pope) of the Church – “feed” or “tend” my lambs.

But then Jesus says something that makes Peter stop in his tracks: “Amen, amen, I say to you, when you were younger, you used to dress yourself and go where you wanted; but when you grow old, you will stretch out your hands, and someone else will dress you and lead you where you do not want to go” (Jn 21: 18).

Peter’s initial response to Jesus is telling: “What about him?”  (referring to St. John).  In other words, “I can handle the shepherding, but I am not so sure about the suffering part.”  Yet, to become a saint, Peter will need to suffer and die.

St. Paul details the various sufferings and trials he endured in order to bring the Gospel to the nations.  This is detailed in 2 Corinthians 11:

“I have been flogged more severely, and been exposed to death again and again.  Five times I received … the forty lashes minus one. Three times I was beaten with rods, once I was pelted with stones, three times I was shipwrecked, I spent a night and a day in the open sea, I have been constantly on the move. I have been in danger from

Every saint endures suffering, but they suffer in, with and through the power of Christ. In the words of St. Paul, “It is no longer I who live, but Christ who lives in me” (Gal 2: 20).

We are in the midst of a pandemic that has brought with it fear and anxiety.  As Christians, we can never lose sight of the Gospel mandate and must strive to never allow anything the world puts before us to stand in the way of spreading the Gospel. St. Paul says in 1 Corinthians 1:9, “Woe to me if I do not preach the Gospel!”

During the third-century Plague of Cyprian (famous for killing upwards of 5,000 people a day in Rome), Christians were reported running toward sufferers, eager to nurse them whatever the cost. In Alexandria, Egypt, St. Dionysius wrote of the Christians, “Heedless of danger, they took charge of the sick, attending to their every need and ministering to them in Christ, and with them departed this life serenely happy; for they were infected by others with the disease, drawing on themselves the sickness of their neighbors and cheerfully accepting their pains.”

In the 19th century, St. Damian served the lepers on the island of Molokai in Hawaii.  Though warned not to go and continue his ministry, he knew that God was calling him not to safety, but into the suffering of serving Jesus in the poorest of the poor.

We see these same selfless acts of love in our healthcare and eldercare providers, our grocery store and gas station workers, those operating our homeless shelters and food pantries, and the many volunteers donating time and resources to support these works of mercy.  Like the saints, there are many ways we can safely give freely of ourselves to serve those in need.

As they say in Italian: Coragio! Have courage!  “But one thing I do: forgetting what lies behind and straining forward to what lies ahead, I press on toward the goal for the prize of the upward call of God in Christ Jesus”  Phil 3:13-14.

— Bill Gavin is director of youth and young adult ministry for the Diocese of Burlington.

Share This Post
Saints, Bill Gavin, Youth and Young Adults
See More
Last Article
Like their counterparts a century ago, seminarians serve others amid pandemic
Next Article
Giving thanks for Thanksgiving
Back to Vermont Catholic Magazine