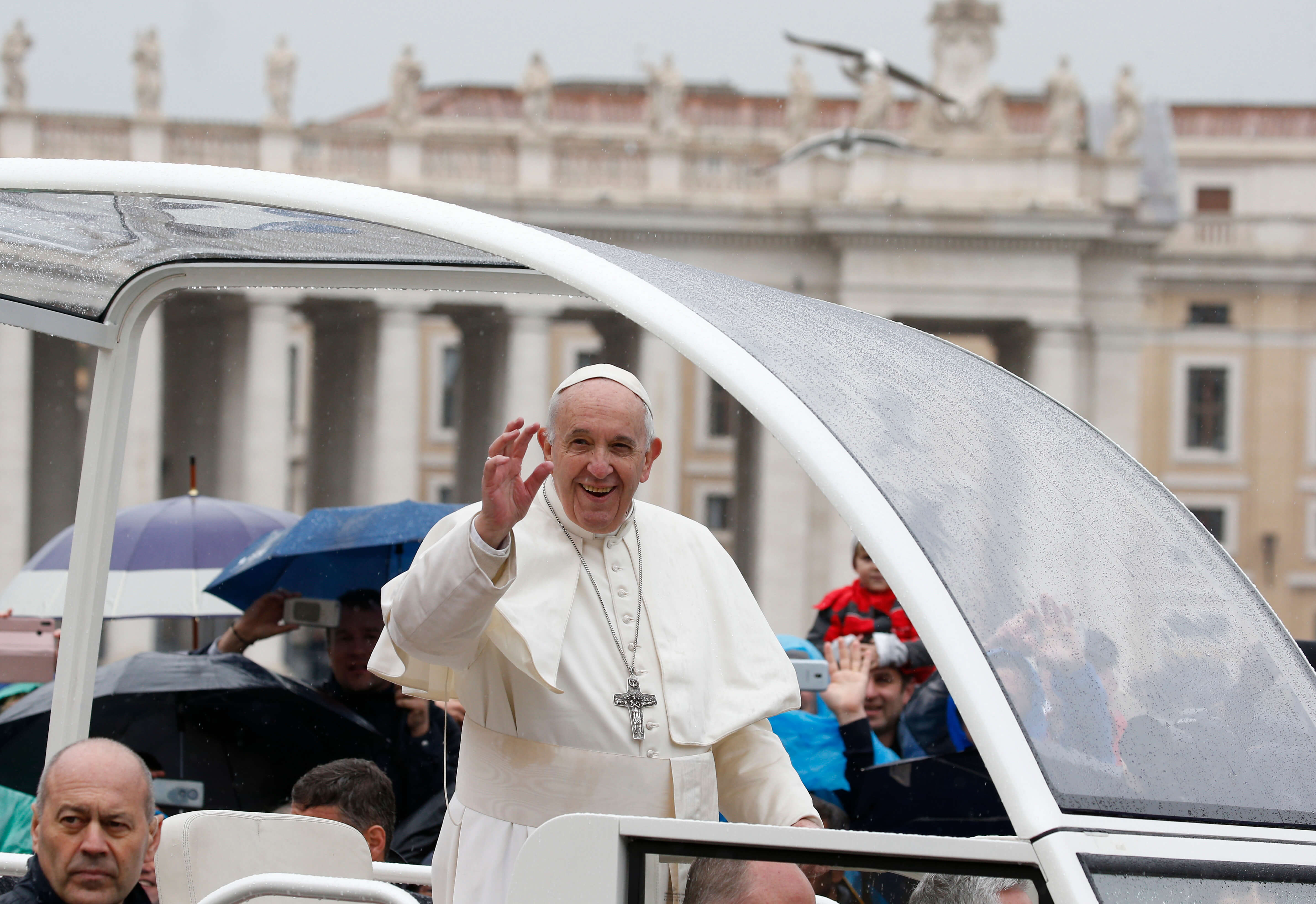 Photo Credit: CNS/Paul Haring - Pope Francis waves as he leaves his general audience in a rainy St. Peter's Square at the Vatican April 10.

All are debtors before God’s love, forgiveness, pope says

Everyone is “in debt” to God, who offers His infinite love and graces for free, Pope Francis said.

“We have received so much: our existence, a father and a mother, friendships, the wonders of creation,” the pope said April 10 during his weekly general audience in a rain-soaked St. Peter’s Square.

“Even if difficult days happen to everyone, we must always remember that life is a grace, it is a miracle that God has pulled out of the blue.”

Continuing his audience talks about the Lord’s Prayer, Pope Francis looked at how Jesus teaches people to ask God to “forgive us our trespasses as we forgive those who trespass against us.”

“Just as we need bread, we need forgiveness every day,” he said.

With the Lord’s Prayer, he said, Christians ask that God forgive their “being in debt,” which is the meaning behind the use of the word “trespasses” in the original Greek of the Gospel.

Even “if we were perfect, even the purest of saints who never waver from a life of good, we are always children who owe everything to the Father,” the pope said.

In fact, the most dangerous thing Christians can be are people filled with pride, deceiving themselves that they are on par with God and owe him nothing, he said.

While some sins are “loud” and glaringly visible, the pope said, pride is the worst of the “sneaky,” less obvious sins, which “nest in the heart” without one realizing it.

Pride can be “contagious,” even infecting those who live an intensely religious life, he added, and it divides people, making them believe they are better than others.

“Before God, we are all sinners and we have reason to beat our breast,” he said. “If we say, ‘We are without sin,’ we deceive ourselves and the truth is not in us.”

Everyone also is in debt, the pope said, for the boundless love they receive from God.

People are capable of loving because they have been loved first and they love, not with their own power, but “with the grace of God,” he said.

Much like the moon reflects the sun’s light and the church receives and reflects Christ’s light, he said, people who love are reflecting a love they received in turn.

“Try listening to the story of someone who made a mistake — a prisoner, a convict, a drug addict,” he said, and think about the “anger and abandonment” that may be part of their past.

“If someone has not been illuminated by sunlight, they become frozen like the ground in winter,” he said.

“None of us can love God as much as He has loved us,” Pope Francis said. “We need only gaze at a crucifix to realize how disproportionate” His love is.