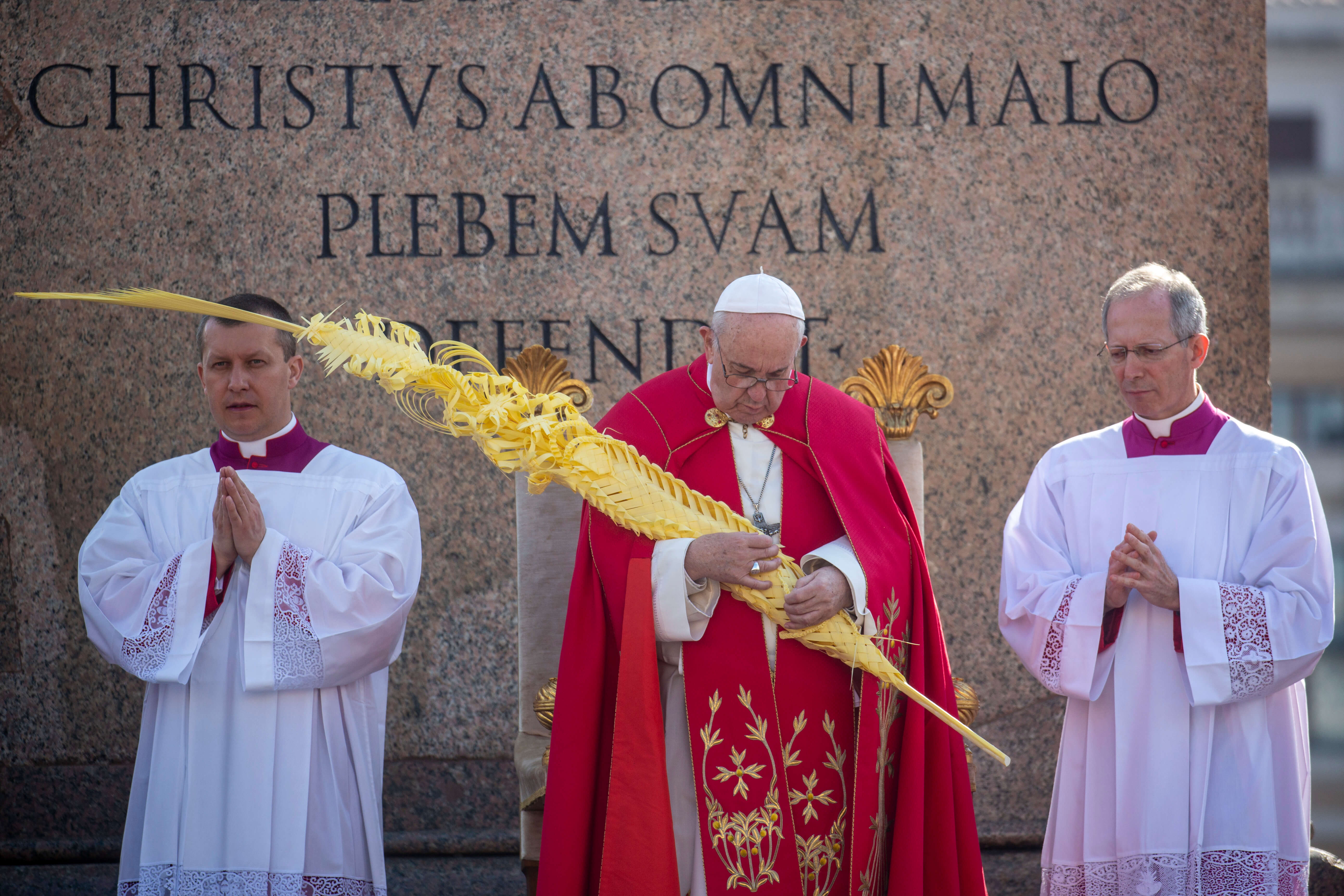 Acclaimed by the crowds and knowing he was the Messiah they sought, Jesus still chose the path of humility and self-emptying, focused only on doing God’s will, Pope Francis said on Palm Sunday.

“There is no negotiating with the cross: one either embraces it or rejects it,” the pope told tens of thousands of people gathered in St. Peter’s Square April 14 to commemorate Jesus’ entry into Jerusalem and the beginning of his passion.

Processing to the obelisk in the center of the square, dozens of young people carried palm branches taller than they were; bishops, cardinals and the pope carried “palmurelli,” woven palms; and all the pilgrims in the square were given olive branches donated by an Italian association of olive oil producers.

After blessing the palms and listening to the Gospel reading of Jesus’ entry into Jerusalem, the young people, bishops, cardinals and pope processed to the steps of St. Peter’s Basilica for the main part of the Mass, which included the reading of the Passion.

At the Vatican and in many parts of the world, Palm Sunday also is marked as the local celebration of World Youth Day, and Pope Francis spoke specifically to young people in his homily.

“Countless holy men and women have followed Jesus on the path of humility and obedience,” the pope said. The holy ones include many young people recognized by the church as saints or known only to God.

“Dear young people,” the pope said, “do not be ashamed to show your enthusiasm for Jesus, to shout out that he is alive and that he is your life.”

At the same time, he said, “do not be afraid to follow Him on the way of the cross. When you hear that He is asking you to renounce yourselves, to let yourselves be stripped of every security and to entrust yourselves completely to our Father in heaven, then rejoice and exult! You are on the path of the kingdom of God.”

Throughout his life, including when He was acclaimed with shouts of “Hosanna” and later stripped and nailed to the cross, the pope said, Jesus showed “us how to face moments of difficulty and the most insidious of temptations by preserving in our hearts a peace that is neither detachment nor superhuman impassivity, but confident abandonment to the Father and to His saving will, which bestows life and mercy.”

From the moment of the temptation in the desert and until Jesus’ death, he said, the devil, “the prince of this world,” tried to entice Jesus into abandoning His humility and instead embrace “triumphalism.”

“Triumphalism tries to make it to the goal by shortcuts and false compromises,” he said. “It lives off gestures and words that are not forged in the crucible of the cross; it grows by looking askance at others and constantly judging them inferior, wanting, failures.”

But Jesus chose the path to true triumph, the triumph of God over the devil, the pope said. “He knows that true triumph involves making room for God and that the only way to do that is by stripping oneself, by self-emptying. To remain silent, to pray, to accept humiliation.”

“He also overcomes the temptation to answer back, to act like a ‘superstar,'” Pope Francis said.

Like Jesus, he said, “in moments of darkness and great tribulation, we need to keep silent, to find the courage not to speak, as long as our silence is meek and not full of anger.”

When faced with holy silence, he said, “the devil will take courage and come out into the open,” and God will take over the fight.

“Our place of safety will be beneath the mantle of the holy Mother of God,” the pope said. “As we wait for the Lord to come and calm the storm, by our silent witness in prayer we give ourselves and others ‘an accounting for the hope that is within us.'”