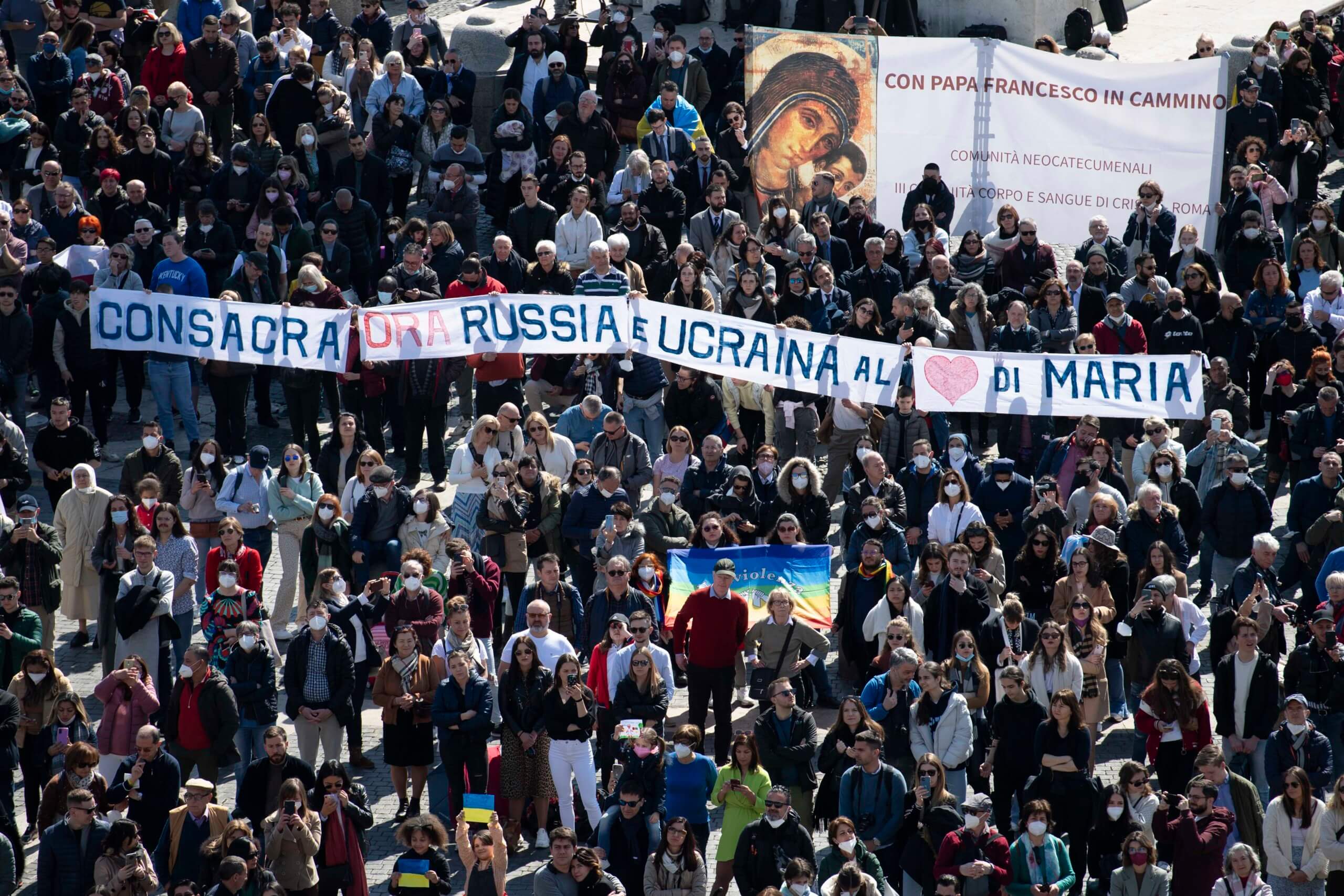 Photo Credit: CNS/Vatican Media - A sign in St. Peter's Square calls for the consecration of Russia and Ukraine to Mary, during Pope Francis' Angelus at the Vatican March 13. Appealing again for peace in Ukraine, Pope Francis said those who support violence profane the name of God.

Lent is a time to wake up, pray more, care for others, pope says

Lent is a good time to ask God’s help in throwing off any spiritual “drowsiness” that dulls a person’s prayer life and attentiveness to the needs of others, Pope Francis said.

“It is a period in which God wants to awaken us from our inner lethargy, from this sleepiness that does not let the Spirit express itself,” he said March 13 before leading the Angelus prayer with thousands of people gathered in St. Peter’s Square.

Looking at the Sunday Gospel reading, which recounted the transfiguration of Jesus, Pope Francis pointed out that the story says that Peter, James and John “had been overcome by sleep, but becoming fully awake, they saw His (Jesus’) glory and the two men standing with Him.”

It wasn’t the last time the disciples would snooze at an important moment, the pope said; it would happen in the Garden of Gethsemane.

“This somnolence in such important moments is surprising,” he said. But it is possible that initially they, too, were praying like Jesus was, “until tiredness prevailed.”

Pope Francis asked people to reflect on whether they also are afflicted by an “ill-timed slumber,” especially in the evening when they had tried or promised to pray.

Lent is the time to ask God for help in being wakeful in prayer, he said, because “keeping the heart awake does not depend on us alone: it is a grace and must be requested.”

The Gospel story, he said, speaks about Jesus’ face changing appearance and his clothing being “dazzling white” just before the disciples wake up.

It is possible, he said, “that it was the light of Jesus that reawakened them. Like them, we too are in need of God’s light, which makes us see things in a different way: it attracts us, it reawakens us, it reignites our desire and strength to pray, to look within ourselves and to dedicate time to others.”

During Lent, the pope said, “ask the Holy Spirit to bring us out of this slumber that prevents us from praying.”