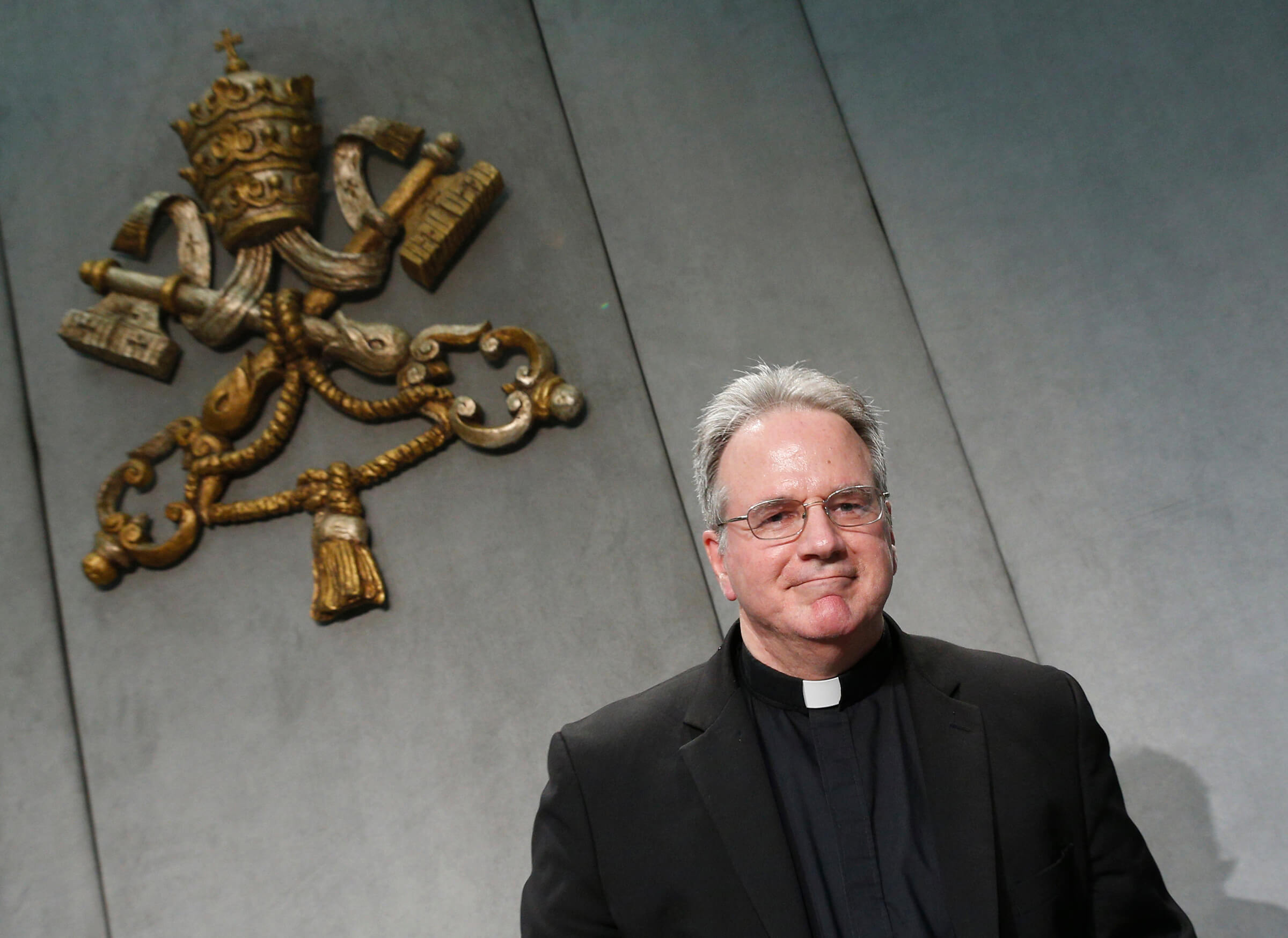 Photo Credit: CNS photo/Paul Haring - Jesuit Father Patrick Kelly, associate professor of theology and religious studies at Seattle University, arrives for a news conference for the release of a document on sports titled "Giving the Best of Yourself" at the Vatican June 1. The document by the Dicastery for Laity, the Family and Life offers guidelines, recommendations and warnings about sports.

Vatican: Sports on Sundays OK, except when used to skip Mass

A new Vatican document cautions against the dangers of highly competitive children’s sports, political and economic pressures on athletes to win ‘”at all costs” and the unsportsmanlike or violent behavior of fans.

The document on sports also calls on every group or institution sponsoring sports programs to have expert-guided child protection policies in place and it urged bishops, parishes and lay Catholics to be proactive in helping “humanize” sports.

The document, “Giving the Best of Yourself,” also condoned sports on Sundays as a means of bringing families and communities together in joy and celebration, but only as long as such events are not used as an excuse to miss Mass.

The document was released June 1 by the Dicastery for Laity, the Family and Life, and is the first Vatican document on sports, said Cardinal Kevin Farrell, the dicastery’s prefect.

In a message to the cardinal, Pope Francis applauded the document and said, “Sport is a very rich source of values and virtues that help us to become better people.”

“We need to deepen the close connection that exists between sport and life, which can enlighten one another,” said the pope, who often fondly recalls how he and his family cheered on his favorite soccer team when he was a boy.

The 52-page document highlighted the Church’s positive view of the important values inherent to sport and blew the whistle on the growing threats in the sports world, including corruption, over-commercialization, manipulation and abuse.

The document — meant for all Catholics and “people of goodwill” — also was an invitation to the church to offer itself as a valuable resource, partner and leader in safeguarding the dignity of the human person and all of creation.

In fact, it made specific reference to the need to protect the environment when it comes to hosting sporting events and to respect animals involved in sports, ensuring “that they are treated in a morally appropriate way and not as mere objects.”

It also mentioned briefly the growing and lucrative business of e-sports, that is, video game competitions and tournaments that award large cash prizes and draw huge numbers of spectators.

While not trying to touch on every problem or concern or pinpoint one sport in particular, the document listed what it saw as four serious challenges that are the result of an obsession with success and the huge economic and political pressures put on sports and athletes: the debasement of the body, doping, corruption and the negative behavior of spectators.

“Sports that inevitably cause serious harm to the human body cannot be ethically justified,” it said. Given the greater understanding people now have about the harmful effects of some sports on the body, particularly brain damage, all of society must put the well-being and health of the person first.

People are not machines, it said, and parents, coaches and communities must avoid objectifying players, particularly with expectations they receive medals, scholarships, wealth or break records.

“Aberrations of this kind can be seen in highly competitive children’s sports,” it said, noting an increase in pushing kids to specialize — often starting very early in life — in one sport intensively year-round, which can result in overuse injuries or eating disorders, particularly in girls’ and women’s gymnastics.

“Parents have a responsibility of showing children that they are loved for who they are, not for their successes, appearance or physical abilities,” it said.

Among the rights of life, dignity and freedom that must be protected in sports is protection against abuse, it said.

“Incidences of abuse of children whether physical, sexual or emotional by coaches, trainers or other adults are a direct affront” to minors, it said, so “institutions that sponsor sports programs for youth, including at the elite level, must develop policies with the help of experts that ensure the safety of all children.”

The document called on the church to develop and promote an “apostolate for sports” that shows the church’s commitment to the integral well-being and development of the human person in sports and to directly initiate sports-related activities at the local level.

It asked for appropriate pastoral plans for players and athletes — including former professionals who sometimes experience depression and substance abuse when their career comes to an end — as well as for parents and volunteers.

It called for “an educational strategy” to help coaches, teachers and managers seek the “best, most holistic” ways to humanize sports, and it urged seminaries to include formation in the pastoral care of sport as well as opportunities to practice sports, noting its potential as a way to evangelize.

Santiago Perez de Camino, head of the dicastery’s Church and Sport Office, was asked about the impact of seeing religious and priests compete in major competitions, like U.S. Father Stephen Gadberry of Arkansas, who was appearing on the reality show, “American Ninja Warrior.”

Father Gadberry and all men and women religious athletes offer “a very beautiful witness of how to join faith with sport,” he said.

They also show a Church that doesn’t wait for people to come to them, he said, but one that goes directly onto the field to meet people where they are.

The document drew upon talks and teachings from Popes Pius X to Francis, as well as St. Thomas Aquinas, bishops’ conferences and the Congregation for the Doctrine of the Faith. It also cited contemporary experts, theologians and athletes, including David Meggyesy, former St. Louis Cardinals linebacker, who detailed the dehumanizing effects of pro-football in his book, “Out of Their League.”

Lastly, the document emphasized how sports must always include fun. Competition is meant to fruitfully engage and draw the best out of people, it said, not to face “an enemy who must be annihilated.”

Pope Francis, it said, invites people not only to play, but also to “challenge yourself in the game of life,” striving for what is good with courage and enthusiasm.

“Don’t settle for a mediocre ‘tie,’ give it your best, spend your life on what really matters and lasts forever,” Pope Francis said.