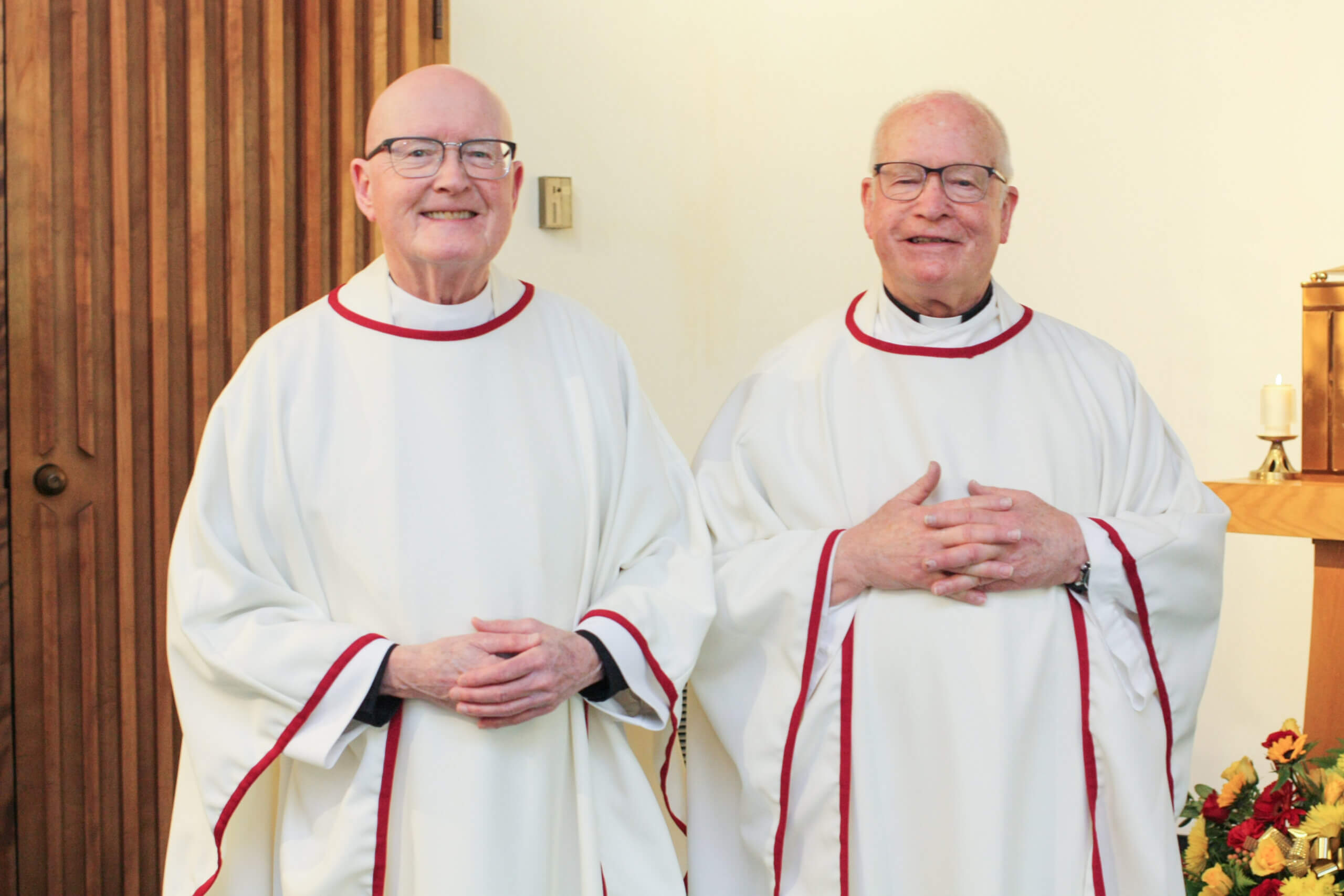 Two priests of the Society of St. Edmund celebrated their 50th anniversary of ordination June 11 as Burlington Bishop Christopher Coyne celebrated the Vigil Mass at St. Lawrence Church in Essex Junction in thanksgiving to God for their of priestly ministry.

Father David Cray, superior general of the Society of St. Edmund, and Father Charles Ranges, pastor of the Essex Catholic Community, received special thanks from the bishop for their faithful service to the Church.

Following the jubilee Mass at St. Lawrence Church, a dinner was served by parishioners at the Robideau Parish Hall in the parish center on the Holy Family campus for more than 250 guests.

As a priest, Father David Cray for years did not live and minister in the New England culture into which he was born and in which he lived before entering the Society of St. Edmund during college.

He lived mostly in Canada, Europe and the American South until he came to Vermont to serve as pastor of St. Jude Church in Hinesburg and Our Lady of Mount Carmel Church in Charlotte in 2003.

“The benefit of living in more than one culture is you realize there are very few absolutes apart from God,” he said.

Born into an Irish Catholic family in the Jamaica Plain section of Boston in 1945, he is the youngest of the three children of John F. Cray, a high school Latin teacher, and Alice M. Kernan Cray, who worked in the Boston Public Library.

Because he lived a distance from his parish and parish school, he attended public school but got to know many of his religious neighbors, skating in the park with Maryknoll Brothers or building a tree house on their property, for example.

Sometimes he and his friends would be playing outside when one would suggest going into the Maryknoll chapel to pray the Stations of the Cross. “The religious aspect was part of our lives,” he said.

He graduated from Boston Latin School in 1963 and enrolled at St. Michael’s College in Colchester; his family had ties to Bellows Falls, and he liked the idea of studying in Vermont at a Catholic college where he attended daily Mass.

He intended to become and English teacher, but during his sophomore year, his plans changed as he prepared for study in Europe during his junior year.

In the process of planning with the dean of students, Father Francis Gokey, the Edmundite priest asked him what he intended to do after college. When he replied, “teach,” Father Gokey asked him if he had ever thought of the similarity between teaching and preaching.

Young David Cray got the hint.

He told his friends what Father Gokey had said, and they agreed he’d make a good priest. “Father Gokey sparked and fostered my vocation,” he said.

David Cray entered the Edmundite novitiate and graduated from St. Michael’s in 1968 then studied theology at the University of St. Michael’s College in Toronto, earning a master of divinity degree in 1971.

Burlington Bishop John A. Marshall ordained him to the priesthood in 1972, and his first assignment was as parochial vicar of St. Edmund of Canterbury Parish in Whitton in southwest London, a parish staffed by the Society of St. Edmund.

Father Cray lived in Burlington where he served as director of scholastics for the society and later as secretary general, and he lived in Mystic, Conn., where he was the order’s director of novices.

He served parishes — some years two at once — in Quebec and was episcopal vicar for the English-speaking region in the Diocese of Saint-Jean–Longueuil where, for two years he was a pastor in Greenfield Park.

From Canada he was transferred to Selma, Ala., to serve as programs director of the Society of St. Edmund’s Southern Mission, and from there moved to New Orleans to be president of Bishop Perry Middle School.

He became accustomed to living as part of a minority population, and he earned a master of theology degree from Xavier University of Louisiana in New Orleans with a concentration in Black Pastoral Theology.

“I have benefitted tremendously from living in cultures that are not the culture I was brought up in,” Father Cray said. “I lived in cultures that would be foreign to me if I had not lived there and been integrated into them.”

“You can change the tone of the conversation in your circle of friends and family,” he suggested. “You don’t have to keep intensifying the atmosphere and feelings of alienation, of division, of hatred.  If you do, it just gets worse.”

Emphasizing that all persons are children of God, Father Cray said, “God has given us all one single origin and calls us all to be one single human family.”

Living in different cultures has broadened his perspective and enriched his life. “Division and violence come out of not knowing. When you do not know, have no awareness of or acquaintance with people who are completely different from you, you fear them. When you get to know people and appreciate people, you come to love them, and you don’t fear them.”

A member of the Society of St. Edmund, which is celebrating its 175th anniversary, Father Cray said he has served in various places and cultures because of his vow of obedience. “It is important to discern God’s will and be obedient to it,” he said.

Father Charles Ranges was the fifth of the seven children born to Dr. Hilmert “Joe” Ranges — a New York cardiologist — and Charlotte “Kay” Ranges, a nurse.

He remembers the day his father’s secretary called his wife and told her Dr. Ranges was not charging all of his patients for his services.

But that’s just the kind of man the doctor was — a man who respected everyone and never “talked down” to anyone, regardless of their financial status.

The doctor was a man of service in the New Rochelle community where he and his wife raised their family. Their example inspired young “Charlie,” who gave up a serious relationship with a longtime girlfriend, to become a priest of the Society of St. Edmund, the order of priests and brothers that founded St. Michael’s College in Colchester, his alma mater.

“I was always quite pious,” said the Catholic elementary and high school graduate who is now pastor of the Essex Catholic Community that encompasses Holy Family/St. Lawrence Parish in Essex Junction and St. Pius X Parish in Essex Center. “My faith came more to the surface in college,” where his dorm proctor, Edmundite Father Nelson Ziter, encouraged him in his vocation to the priesthood.

It was “with tears” that the young man broke up with his girlfriend — “it could have been a soap opera,” he said — admitting that he had never really shared with her his faith journey. (He now advises individuals to share their faith with potential spouses, “because that is who you are so you should share your total being” with that person.)

After graduation from St. Michael’s College in 1967 where he had studied American Studies with the thought of teaching, Father Ranges entered the Edmundite novitiate and was ordained in 1972 by Burlington Bishop John Marshall at the college chapel.

Most of his ministry has been in parishes, but he did spend time in campus ministry at the college and in fundraising for the Edmundite Seminary Guild.

He has served parishes in Alabama and Connecticut as well as in Vermont in Highgate, Swanton, Essex and Essex Junction.

Now with three churches under his care, Father Ranges said he could not maintain his ministry without the help of “confreres” from St. Michael’s College who assist with the celebration of weekend Masses.

“I love Essex, and I love being a priest,” Father Ranges said. “I have never lost my enthusiasm for being a priest. … I could never see myself as anything but a parish priest.”

And as pastor of the Essex Catholic Community with its 1,700 households, Father Ranges has emulated his father in his service to others. The parish has numerous active ministries to perform Corporal Works of Mercy including “Serve Our Neighbor Days,” Essex Eats Out and funeral luncheons. The parishes support prison ministry and local food shelves. The Holy Family parish hall is used by non-profits like hospice and AA for meetings, and its kitchen is “green” as part of the parish’s effort to care for the Earth.

“I have to keep the vision going,” he said, emphasizing the importance of a leader practicing what he preaches.

Crediting Burlington Bishop Christopher Coyne for these “3 W’s,” Father Ranges calls upon people to do good works, witness to those works as inspired by love for Jesus and invite others to worship with them at Mass.

A self-described extrovert, he enjoys parish life and being a part of the parish family.

And at 76, Father Ranges has no desire to retire from his role in the parish.