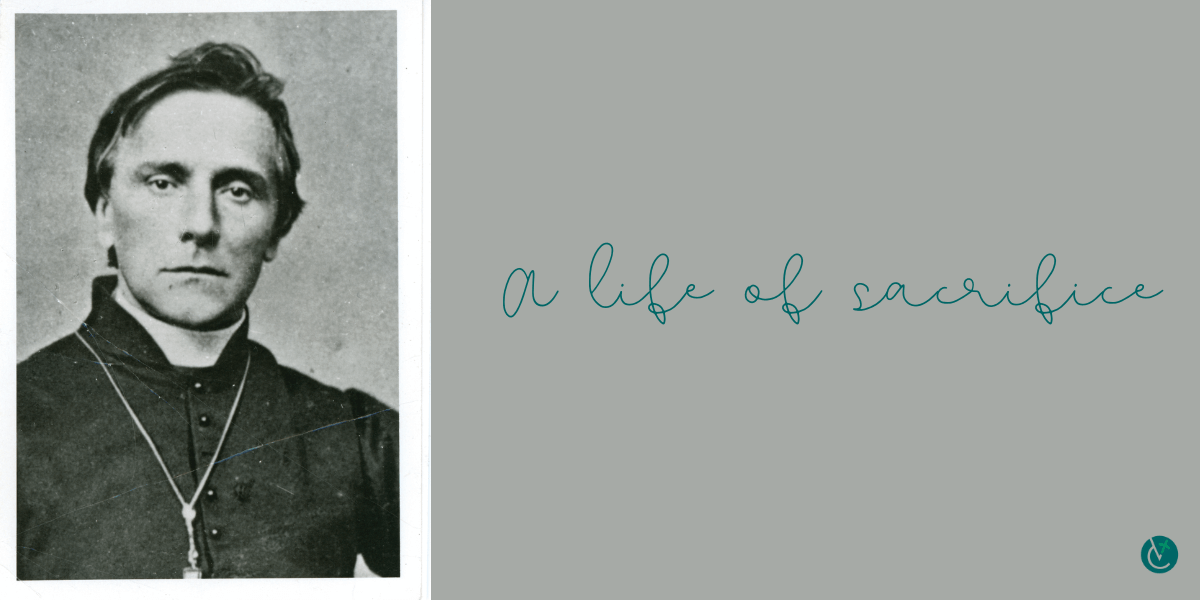 A Life of Sacrifice

On July 14, 1853, Pope Pius IX and the Propagation of Faith appointed the 37-year old vicar general of Cleveland and French immigrant Father Louis deGoësbriand, bishop of the new Diocese of Burlington. The decree for this establishment was published on the same date. The new Diocese would include the entire state of Vermont and would be a suffragan see of New York under Archbishop Hughes. On October 18, 1853 Father deGoësbriand sent his official reply to Rome and accepted his episcopal appointment.

Earlier, on Sept, 23, 1853, Father deGoësbriand wrote to Father Quévillon, pastor of St. Joseph Church in Burlington, notifying him that he had been appointed bishop of the new Diocese and expressing his total commitment and spirit of sacrifice for his Diocese.  He states in his letter:

Having been designated by our Holy Father the Pope to fulfill the sublime function of first Bishop of the new see of Burlington, I make it a point to let you know that I am going to accept.

I do not yet know just when or in what place I shall receive the consecration, but the time is not far off, and as soon as possible I shall reach my post. I desire that you yourself, my dear Father, and the souls entrusted to you, address to God for me the most fervent prayers, especially until the day of my consecration. From this day I consider myself the servant and father of the dear souls entrusted to you; and as my life from now on will be totally dedicated to their sanctification, they will doubtless make it a duty to assist me in obtaining from Heaven the many graces I need to sanctify myself with them.

I placed today the Diocese of Burlington under the protection of Mary our Blessed and powerful Queen and Mother. Please encourage your parishioners to implore her intercession on my behalf. In awaiting the pleasure of blessing them and speaking to them, kindly assure them of the devotion and affection I hold for them.

Please accept for yourself the expression of my most sincere respect, and do not forget to pray for your poor new Bishop.

Father deGoësbriand had only been a priest for 13 years; all of which he had spent as a missionary in Ohio, a seminary rector and a vicar general for the new Diocese of Cleveland.

The Cleveland Plain Dealer newspaper reported on the consecration ceremony which took place on Oct. 30, 1853, at the (old) St. Patrick’s Cathedral in New York City: “The Rev. Father deGoësbriand, recent Vicar General of the Diocese of Cleveland has left the city to take charge of the Diocese of Burlington, Vermont as Bishop. … Mr. deGoësbriand is well known as a clergyman of much ability and was much beloved by the people of this Diocese.”

Bishop deGoësbriand reveals in his letter to Father Quévillon his personal spirituality and understanding of being a bishop; that is, to be a servant to his priests and flock, to be a father for all his spiritual children, to sacrifice his life for their sanctification and to depend upon their prayers for the sake of his own holiness. In order to accomplish this, he dedicates the Diocese to the Virgin Mary. Little did he know then that his Marian devotion and life of sacrifice would sustain a blessed episcopacy for 46 years.