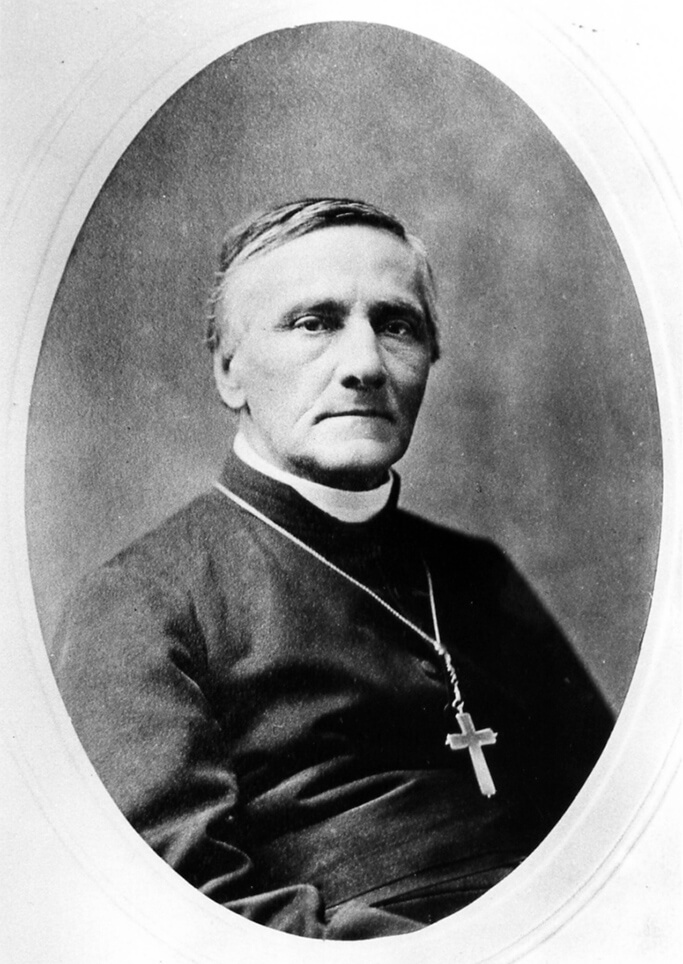 After 32 years as the founding bishop of the Diocese of Burlington, Bishop Louis deGoesbriand, aged 69, began an intense period of writing toward the last decade of his life. Still consumed with untiring episcopal duties in Burlington and traveling to the far corners of the Diocese, he wrote specifically for the Catholic faithful of Vermont.

As bishop of Burlington, his writings focus on the truths of the Catholic faith, not just as mere dogma, but as the incorporation of sacred scripture, liturgy, parish life and the tenets of the faith into a unified whole, beneficial to the lives of his flock. His prolific research, travels and writing earned him the reputation among the 19th-century episcopacy as a bishop renowned for his holiness and erudition.

Concerning the 1890 publication of Bishop deGoesbriand’s masterpiece, “Christ on the Altar,” Cardinal James Gibbons of Baltimore referred to the bishop as “the pious and learned Bishop of Burlington.” New York Archbishop Michael Corrigan stated that the book’s “fragrance of piety and devotion … perfumes every page.” Father John Keane, rector of the Catholic University of America stated: “No theme could better suit the pen of the holy and learned Bishop of Burlington, and few men could be better fitted to treat it than he certainly is.”

But an earlier work which he wrote in 1885 demonstrates in particular his understanding of the need to evangelize through the heroic virtue of other Catholic men and women. He recounts the lives of several high-profile converts to the Catholic faith whose stories he rightly understood would stimulate the perseverance in the faith of contemporary Catholics. These converts include: Fanny Allen, Daniel Barber, Virgil Barber, Jerusha Barber, Mary Barber, Abigail Barber, Susan Barber, Samuel Barber, William Henry Hoyt and Anna Hoyt. All of these people were Protestants who became Catholic, many of them at the loss of public reputation, renunciation of office as Protestant ministers, and the object of public scorn. These people were well-known to Bishop deGoesbriand’s audience in the late 19th century.

In his preface, Bishop deGoesbriand states: “We humbly, but firmly, hope that this work will be read extensively, because it is connected with the history of the Church, not only in Vermont and New Hampshire, but in all the States of New England, Canada, New York and many other places. We rejoice in the hope that the work will do much good, for it contains the lives of many heroic souls, whose examples will excite others to walk in their steps. Some of the letters which it contains will also be found most edifying to persons living in the world, or out of the world in religious communities.”

Bishop deGoesbriand created this book by obtaining letters from the above-mentioned persons, correspondence from contemporaries who knew these converts and even traveled to the Hôtel-Dieu in Montreal to speak with elderly sisters who personally knew Sister Fanny Allen when she lived there. Bishop deGoesbriand devoted his life not just to building churches throughout Vermont, increasing the number of priests and religious, building convents and an orphanage, but he also instructed the faithful members of his fledgling Diocese in the teachings of the Catholic Church during an age of anti-Catholic sentiment. He took great pains to transmit the stories of legendary Catholic converts for the edification of his contemporaries — and for us, their descendants.

The stories of Fanny Allen, the Barber family and Henry and Anna Hoyt are as profoundly moving to us today as they were to our ancestors.