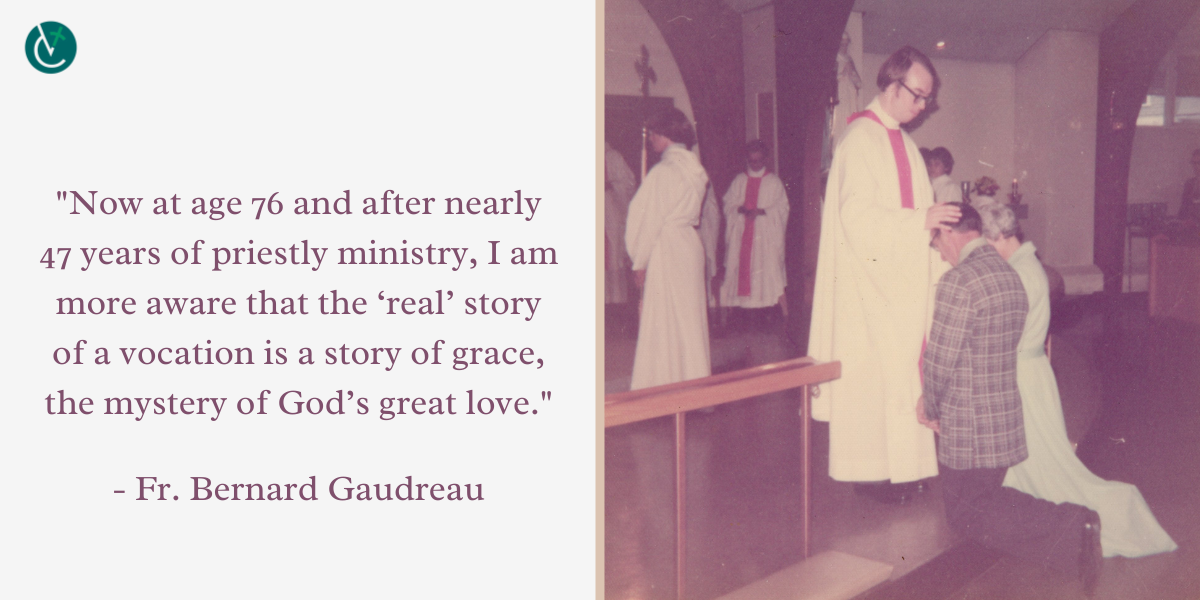 From the beginning of his priesthood nearly 50 years ago, the celebration of the liturgy — especially the celebration of Mass — has been central to Father Bernard Gaudreau’s life and closest to his heart: “Being a priest is the purpose of my very existence.”

A retired but busy priest of the Diocese of Burlington, Father Gaudreau is a member of the diocesan Worship Commission. He has worked to foster good liturgy in the Diocese for years; he was director of the Liturgical Development Program from 1983-1989 and shared his knowledge of liturgy at the seven Vermont parishes he served both as a parochial vicar and pastor.

“Father Gaudreau’s consistent work with and focus on the liturgy have imbued the faithful of the Diocese with a vision of liturgy promoted by the Second Vatican Council,” said Josh Perry, director of the Office of Worship for the Diocese. “He understands the importance of liturgy to the life of the parish, fostering the full, active and conscious participation of the faithful and seeking to instill in parishioners that the liturgy, especially the Eucharist, is indeed the source and summit of the Church’s life and missionary activity.”

Father Gaudreau was born and raised on a small dairy farm in Derby, near the Canadian border. His father, Rene Gaudreau, was raised in Beebe Plain; his mother, Hélène Poulin, moved to Beebe, Québec, with her family in the late 1930s. Married in 1944, they had five children; he is the oldest. The family spoke French at home, and he attended the Catholic school of his parish in Beebe. From the fifth grade through high school he attended Sacred Heart schools in Newport.

“It would not be accurate to say that I ‘heard’ a call to priesthood,” he said; the priesthood did not become a serious consideration for him until he was 17. “Home, parish and school life prepared the ground of my heart to hear and accept this call.”

As in the homes of his grandparents, his family prayed the rosary every day and attended Sunday Mass. No farm work was done on Sunday, except the most necessary chores.

Because his father sang in the choir and his mother often played the organ both in Beebe and at St. Edward Church in Derby Line, the Gaudreau Family was always at Christmas Midnight Mass and the Easter Vigil in the night hours of Holy Saturday. It was natural for him and his brother to join them in the choir loft when they reached high school.

“At Sacred Heart I learned to love sacred music, motets of Palestrina, choruses from Handel’s Messiah and many more works,” Father Gaudreau recalled. “Music is what stirred my soul the most then and still does; it’s where I feel closest God.”

So, when as a high school senior, he became serious about finding the course for his life, the priesthood presented itself as a good path. “Grace was surely at work when it became clear to me there was nothing more significant to do with my life than to serve as a priest,” he said.

His seminary studies began at St. John Vianney Minor Seminary in Barre; from there he attended St. John Seminary College and School of Theology in Boston. “There was a hiatus of two years in those turbulent early ‘70s when I stepped back to re-think this vocation,” he said. “Providentially I secured a job as liturgy coordinator in a parish in the Boston area; I loved that job! But still the ‘pull’ of the priesthood was there, and with much prayer and guidance from my spiritual director I was given the grace of yielding to God’s call.”

He returned to Vermont, and after 10 months of diaconate ministry at St. Ann Church in Milton, he was ordained to the priesthood at St. Edward Church in 1975.

Within months of ordination he was tapped to serve on the Diocesan Liturgical (Worship) Commission, and for many years he assisted at diocesan liturgies — ordinations, Chrism Masses, confirmations and the installation and ordination of bishops.

“The most significant aspect of my vocational journey is the story of grace, the story of God’s love for me and for those whom I was called to serve; it’s not unlike, though not nearly as profound, as the stories told in the confessions and spiritual autobiographies of the saints,” Father Gaudreau said. “Now at age 76 and after nearly 47 years of priestly ministry I am more aware that the ‘real’ story of a vocation is a story of grace, the mystery of God’s great love.”

His love for liturgy grew exponentially as a result of the introductory course on the liturgy taught by a Benedictine monk in the seminary; not only did his interest in liturgy grow, the course provided the conviction that the Church’s liturgy is truly the source and summit of the Christian life.

As a young priest, Father Gaudreau attended the University of Notre Dame to earn a master’s degree in liturgical studies to prepare him to direct the Liturgical Development Program. This program involved living in different regions of the Diocese offering a year-long program of liturgical education and ministerial formation in parishes, speaking regularly at Sunday Masses, working with priests, forming liturgy committees, training lectors, working with pastoral musicians, etc.  “The goal was to implement the directives of the Church as articulated in ‘The Constitution on the Sacred Liturgy’ to provide greater understanding and love of the liturgy and to lead faithful to ‘full, conscious and active participation,’” he explained.

“As always, our people need that spiritual formation and education in the true meaning and importance of the liturgy: the Mass, all the sacraments, the liturgical year, the Divine Office. We priests, deacons and lay leaders, must strive to celebrate Mass with a living, joyful and vibrant faith,” Father Gaudreau said. “All who exercise a ministry at Mass must be imbued with love for God and love for the people gathered, always striving to offer their best. They must be faithful to the demands of the ritual without becoming mechanical or letting the rites become routine. That requires having a serious life of prayer, ongoing study of the Church’s liturgical documents and a faith rooted in the Sacred Scriptures.”

Perry said Father Gaudreau’s gentle guidance and reflection on liturgical issues (and, at times, his gentle prodding) are a welcome contribution to the overall work of promoting liturgy in the Church: “I’m grateful for the opportunity to work with and learn from him.”

Now as a retired priest, Father Gaudreau is pleased to fill-in for priests who need to be away from their parishes. “I am out in parishes about 80 percent of the time; I really enjoy being with our people,” he said, noting the joy he experienced being a pastor.

What pleases him most is having more time for study and prayer; “I am still discovering new depths to prayer,” he said. “Now my daily prayer includes interceding for a growing list of people and intentions. Christ the High Priest is forever interceding for His Church and the world; I’m learning again that being a priest means imitating Him and joining Him in that constant prayer.”

For Father Gaudreau, prayer remains challenging; it is fraught with distractions, boredom, weariness, etc. “Daily perseverance and effort are needed; fidelity to the relationship with God and humble trust in His love are what are most important,” he said. “I am so grateful for my vocation and the support and love I have received from my family, my friends, my fellow priests and my bishops. …  In the end I am thankful and joyful and hopeful because of faith in God’s constant presence, great mercy and infinite love. I can truly say that everything is a gift; grace is everywhere!”

And celebrating Mass has never failed to move his heart.

—Originally published in the Summer 2022 issue of Vermont Catholic magazine.