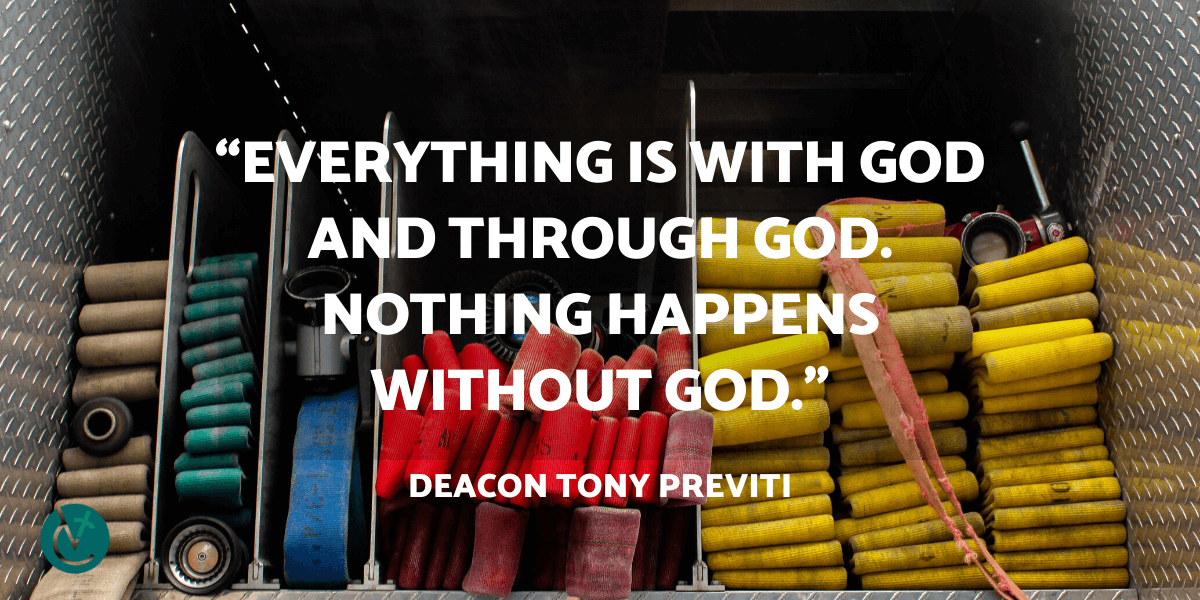 There is a special prayer that Deacon Tony Previti often prays: Lord, let me know what to do and what to say and when to do it and when to say it.

So when the South Burlington Fire Department chaplain walks into the station and a firefighter calls out, “Deacon Tony! Want a cup of coffee?” he knows God is answering his prayer to be doing what he needs to be doing because he has been embraced into the department family.

But when it comes to what to say and when to say it, the chaplain turns it over to God completely because, as he said, his volunteer chaplain ministry is “95 percent listening, 4 percent not saying anything and 1 percent me saying something.”

It’s a ministry of listening and of presence that Deacon Previti volunteered for about three years ago after learning the department didn’t have a chaplain.

A deacon at St. John Vianney Church in South Burlington, he serves the 30 members of the fire department, maintaining “confidentiality 110 percent,” he said. “I’m not here to preach. I’m here in case somebody wants to talk.”

Ordained in 1994, Deacon Previti said a deacon’s mission is “to be,” and serving others is what he does as a deacon.

He began his service to the fire department by stopping by to get to know the firefighters, sometimes wearing his blue fire department sweatshirt with “Deacon Tony” spelled out near his right shoulder. “I stopped in to see how they’re doing. I didn’t want to be intrusive,” he said.

But after a couple of the firefighters told him they’d like him to come more often than once a month for each of the department’s three teams, he increased his time at the station.

Once when he was there, the department was called out, and he was told to get into the truck. On the way back from what turned out to be a false alarm, he was so excited to have had his first ride in a firetruck he had to quell his desire to open the windows and wave to everyone the truck passed.

Deacon Previti, a husband and father of four and grandfather of seven, occasionally spends the better part of a day at the fire station, even staying for dinner and “just being one of the guys.”

A mechanical engineer who retired from IBM in 1999 as a department technician, he also has worked as a carpenter and liaison between the contractor and St. John Vianney Parish during the construction of the parish center.

The Boston-born fire chaplain keeps his badge in his dark blue 2009 GMC Sierra, just in case he needs it, but he keeps his faith in the forefront of his mind and heart at all times. “Everything is with God and through God. Nothing happens without God,” he said.