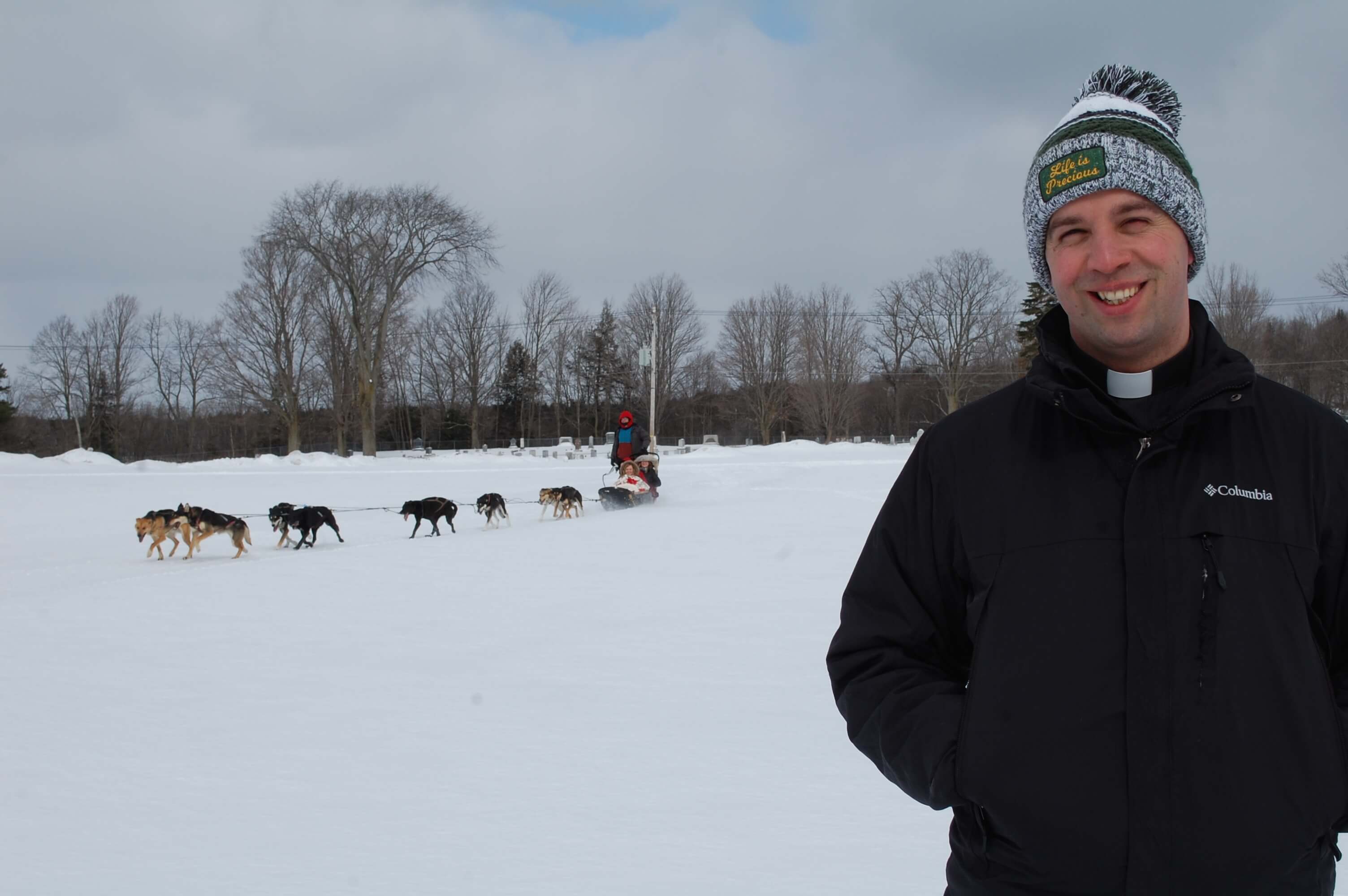 Dog sledding for a cause in Derby Line

On Pio, on Kateri, on Michael and Nicholas!

Musher Nathan Gratton could have called out the saint names of some of his dogs as they pulled him and the blanket-covered riders in his sled over the freshly packed snow around and through the park next to St. Edward Church in Derby Line.

Instead, he called the commands the two lead dogs know well: “Gee” for right and “Haw” for left.

Gratton, a member of Mater Dei Parish, which includes St. Edward Church, provided sled dog rides as a fundraiser Feb. 16 to raise money for roof repairs at St. Mary Star of the Sea Church in Newport, another church in Mater Dei Parish.

His brother, Father Scott Gratton, parochial vicar of St. Francis Xavier Church in Winooski, served as dog handler. “You have to know which dogs get along on the line [pulling the sled] and which ones don’t,” he said. “It’s like human beings.”

It’s also up to the handler to harness the dogs and clean up after them.

Father Gratton and his brother are not new to the sled dog world: They worked together in Alaska during the summers of 2008 and 2009, before he entered the seminary. Nathan was there for 10 summers after finding passion in the sport in 2003 while a student at Norwich University in Northfield.

Now a lathe operator, he sometimes races his dogs: They are preparing for a 100-mile race in Maine in March.

Gratton and his wife, Katelyn, have 20 Alaskan Huskies in their Derby kennel, all bred to be fast. And when a litter is born, each dog gets a name according to a theme. Thus the dogs with saints names were of the litter with a saint theme.

“I get my prayers in when I’m out [mushing] because it’s so peaceful and quiet,” he said.

His father, Peter, is proud of the men his sons are. “Seeing them getting closer to God is really nice,” he said while helping with the fund-raising dog sled event.

“This gets everyone outside in the beauty of God’s nature … being one with God in the beauty of nature,” Father Gratton said, as he stood in the sunshine and breeze, dressed against the temperature in the twenties in a black jacket and black snow pants with a “Life is Precious” knit hat.

He said everyone is called to use his or her gifts for God’s purpose: “This happens to be Nathan’s gift.”

Sarah Rabideau of Derby Line brought her sons Parker, 5, and Greyson, 2, for a ride because, she said, it’s fun for them and the event raises funds for a good cause.

Father Gratton, a native of Mater Dei Parish, said previous generations of Catholics built and maintained the churches, and now it is “up to us to contribute” to their maintenance.

The fund-raising event — with the help of the local Knights of Columbus — included sugar on snow and doughnuts in the St. Edward Parish Center.