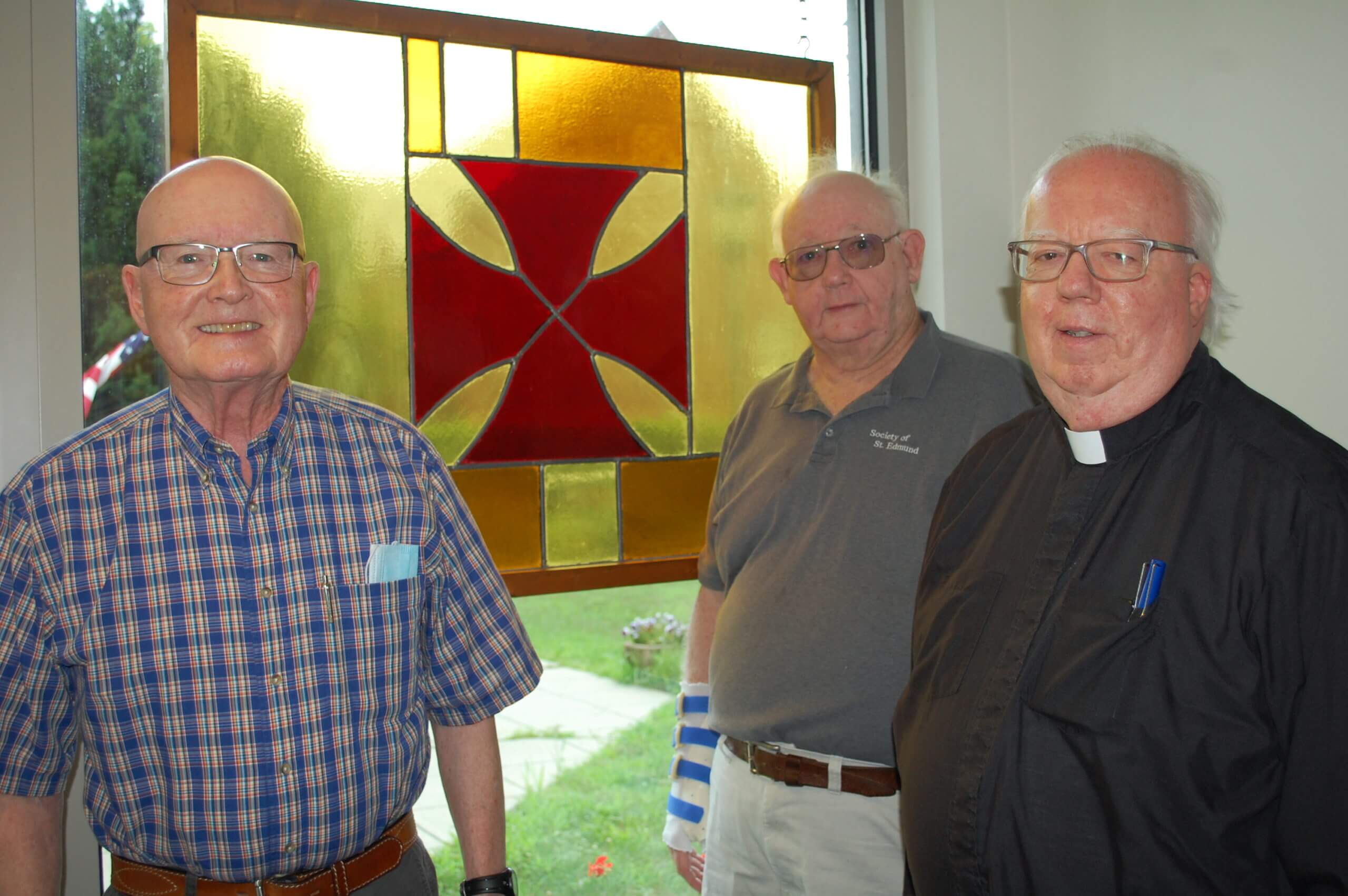 “Miss Cely,” an impoverished, elderly African American woman living in a shanty outside Selma, Alabama, made such an impression on Father David Cray that he still talks about her more than 40 years after meeting her.

The priest of the Society of St. Edmund was the director of novices when he visited Miss Cely, who lived with her elderly, disabled son in a shanty in Gee’s Bend, near Selma.  She welcomed him and made a place for him and the novice who was with him to sit on her bed, then lit a couple of sheets of newspaper in the cold pot-belly stove, as if to warm the room where the January light shone in from the outside through gaps in the wall. “She welcomed us as if she were welcoming us to a magnificent mansion,” recalled Father Cray, now superior general of the Colchester-based religious order. “She was a holy woman, faith-filled and gracious.”

Years later, when he was serving as episcopal vicar for the Anglophone Region of the Diocese of St. Jean-Longueuil, Quebec, he was offered a choice of three Edmundite assignments in the United States.

Miss Cely had intrigued him. He wanted to know what made her and people like her tick, and he wanted to have “some of that” depth of humanity and spirituality.  And so he chose to go to Selma — his first assignment in the Edmundite Southern Missions — in 1989.

Father Cray is one of many Edmundites who have ministered in the South through the years; the order still has two members serving there.

Now, especially as the Black Lives Matter movement grows and racial tensions intensify, Father Cray and other Edmundites have important insights to offer. He and three other members of the order shared their experiences with Vermont Catholic readers.

Joining Father Cray for an interview at St. Michael’s College were Father David Theroux, an instructor of religious studies there, who taught and served as a pastor in the order’s Southern Missions, and Brother Frank Hagerty, a spiritual and retreat director who volunteers in restorative justice and veterans’ programs, who worked as an orderly and family nurse practitioner and learning center director in Alabama.

“White physicians would often not prescribe insulin for (black) diabetics who were not well controlled by oral medications because the physicians assumed their black patients were not capable of learning to handle injections,” Brother Hagerty recalled.

Edmundite Father Richard Myhalyk was interviewed via email; he recently concluded serving as pastor of Our Lady Queen of Peace Parish in Selma and was in quarantine for 14 days before beginning work with those in the Addiction Recovery Program based on Enders Island in Mystic, Connecticut.

All four Edmundites interviewed for this story received religious formation as novices from the late Edmundite Father Maurice Ouellet who had been involved deeply in civil and voting rights and organizing during the 1960s in Selma. “Our consciences were formed by him,” Father Theroux said. “He affected every one of us,” added Father Cray.

While living in Vermont, Father Ouellet delivered in the St. Michael’s College chapel what was repeated elsewhere and published in the American Ecclesiastical Review as the “Uncomfortable Christ Homily.”

Father Myhalyk recounted the most vivid lines of that homily: “I saw the face of the uncomfortable Christ – those beaten, scarred externally and internally by the fists of hatred … those filled with the frustration of despair … those jeered at, bruised, gassed, in pain.”

It was Father Myhalyk’s St. Michael’s College Class of 1966 that took part in what was called the “Elizabeth City (North Carolina) Tutorial Project” during which St. Michael’s  students went to the North Carolina black Catholic parish of black Edmundite Father James Robinson upon the prompting of black Edmundite Father Moses Anderson who served as the college’s dean of students and later became auxiliary bishop of the Archdiocese of Detroit.

As a result of that volunteer program many black youth went on to college and successful professions. “SMC volunteers received tremendous insights in seeing life through the lens of the black experience. As race riots unfolded in the late 1960s those who had gone to Elizabeth City better understood the unrest and the anger,” Father Myhalyk said, noting the words of Rev. Martin Luther King Jr.: “People fail to get along because they fear each other; they fear each other because they don’t know each other; they don’t know each other because they have not communicated with each other.”

Father Ouellet spent six or seven years in Selma and in ministry to the black community. “His outspokenness got him a new assignment as director of novices, which allowed him time to speak widely about racism and the plight of blacks,” Father Myhalyk said. “That raising of a wider awareness was perhaps more important than his role as novice director.”

Father Cray was heavily involved in the black community of Selma, and he remembers one hot summer night standing in the street talking to two black men. He realized he was accepted and “fit” into the community. When he commented that he was not black, one of the men disagreed.

Being part of the community was about more than skin color. “We were kind of black by association,” he said. “So, we experienced some of the injustice black people did.”

One night, Father Cray went into a Selma convenience store with a black man who was wearing a suit and tie. The clerk left Father Cray alone but “kept an eye on” the black man as he shopped.

A high school principle told Brother Hagerty that when schools were set up for blacks, it was done in a way the white power structure knew would fail. “They were successful, because the quality of education in Alabama is poor, particularly in public schools for blacks,” he said. “When federal law mandated integration/desegregation of public schools, private ‘white-flight’ schools were opened; they are often called ‘Christian academies.’ State funding for the public, mostly black, schools is inadequate,” he said.

Brother Hagerty worked in a rural learning center that offered GED classes as well as preschool programs and after-school programs for elementary school students. “Parents saw the value of education for their children but usually didn’t see any value of education for themselves. They didn’t see changing their situations in life as possible,” he said. “I saw this as part of the aftermath of slavery.”

Father Cray and his confreres are not surprised at the escalation of racial tensions that have been taking place throughout the country in the aftermath of the killing of George Floyd, a black man, by a white Minneapolis police officer.

What stands out to Father Cray is the participation of white persons in the demonstrations. “I am hoping that good people [of all colors] are realizing racism is an issue,” he said, adding his hope that white people will see how rich their life would be if they got to know members of the black community, their customs and ideas.

“White people are beginning to catch on that you can’t just say you’re not a racist but have to be anti-racist,” Father Theroux said. “I think that is coming through more and more.”

He contends that white people must “work on ourselves” if racism is going to be overcome. “White culture and dominance are the problem. … We need to be a country that is truly multicultural and not ask people, ‘Why don’t you become like us?’”

Inclusion can be a cop-out on the part of white people who expect persons of color to “be like us rather than recognizing the beauty and color of their culture,” he added.

And that requires more than being “color blind.”

“Being ‘color blind’ is white people saying ‘You don’t matter,’” Father Theroux said, and Father Cray added, “When I don’t see your color, I don’t see you.”

While there are 218 churches in Dallas County, Alabama, today — 28 in Selma — few have diverse congregations. “When Bishop John May merged black St. Elizabeth Parish with white Assumption Parish in Selma that created Our Lady Queen of Peace Parish, some said the parish might better have been named ‘Price of Peace,’” Father Myhalyk said. “Sadly, some whites and some blacks left the Catholic Church, but those who remained have shown that ‘catholic’ means universal and an openness to all races, cultures and peoples.”