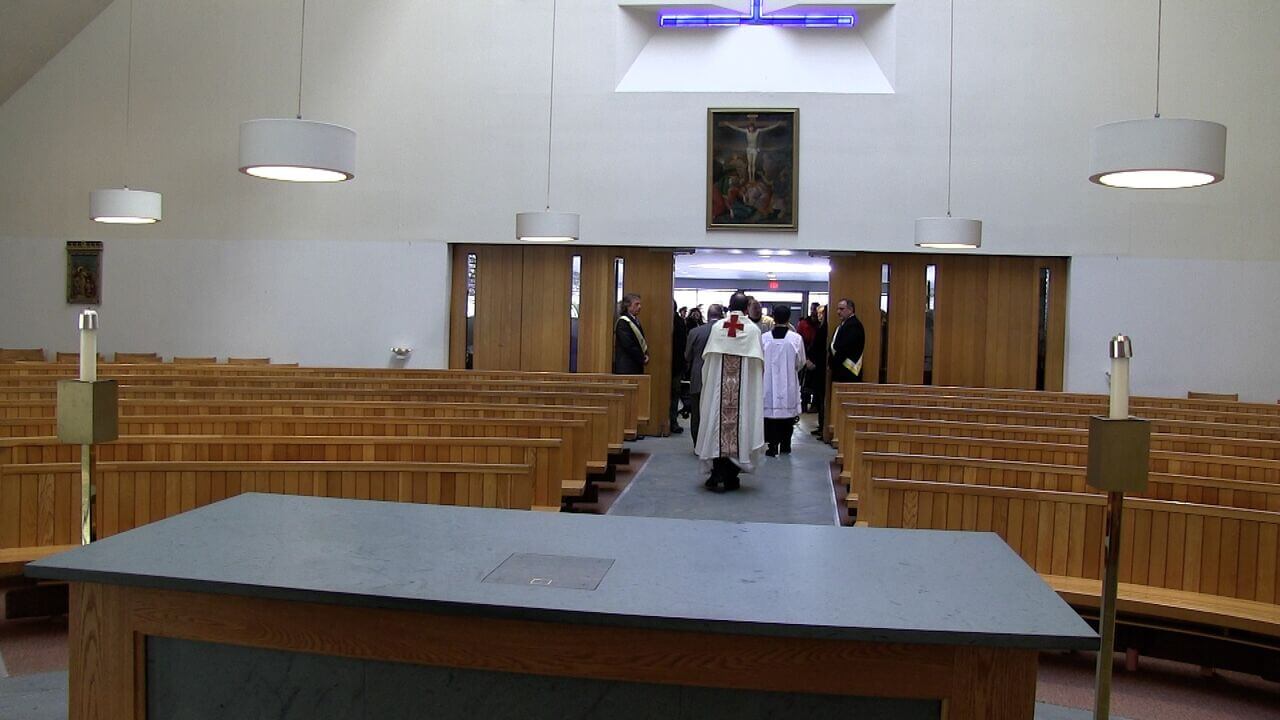 Photo Credit: Vermont Catholic/Steve Giroux - Father Lance Harlow and members of the congregation leave the Church of the Immaculate Conception in Burlington after the Dec. 8 final Mass there.

In 2018 the holy day was celebrated in the church that was constructed in the 1970s to serve as the cathedral after a fire destroyed the original edifice.

And that holy day Mass for the Feast of the Immaculate Conception was the last Mass celebrated in the former cathedral.

Dwindling membership and finances necessitated the closing of what had been the cathedral in the heart of downtown Burlington.

“It seemed only fitting that the second Cathedral of the Immaculate

Conception … should be decommissioned on its patronal feast as a church building,” said Father Lance Harlow, rector and celebrant of the Mass. “It must never be forgotten by the Catholic people of Vermont that Our Lady of the Immaculate Conception continues to remain the patroness of the Diocese of Burlington even though the new cathedral is named after St. Joseph. Our patroness has not changed, and Our Lady of the Immaculate Conception still reigns over the Diocese and her children therein.”

Among the 240 people who attended the morning Mass was Bill LaCroix, a member of Immaculate Conception Parish who served on its finance and parish councils who is now a parish council member at St. Joseph Cathedral Parish. “It was very emotional, very hard … very moving,” he said.

He appreciated Father Harlow’s walk through the church, stopping at significant things like the baptismal font, confessional and statue of Mary and speaking of the importance of each in the life of the parish.

Immaculate Conception choir member and now St. Joseph Cathedral parishioner Chris Pfenning said despite the deep sadness she felt at the closing Mass, there was some relief in knowing the process of closing the church was complete. “It was closure for me,” she said. “I’m ready to go on.”

The closed church is for sale; Donahue and Associates is the real estate agent with whom the parish has contracted to list the property.

“It’s going to be tough to see the closed church” where people have “gotten help, there have been tears and there has been happiness,” LaCroix said. “I’ll feel terrible if they tear it down.”

In his homily at the Dec. 8 Mass, Father Harlow said the church has been a place where many blessings and graces were received; it is where he was ordained in 1993. “I know it’s a sad day for you. It’s a sad day for me. … I received a life as a priest here.”

When he arrived as rector three years ago, he said the parish was $3,000 in the red every week.

But even though Immaculate Conception Church has closed, the Catholic Church “remains alive until the end of time,” he said.

After the Mass, Father Harlow said the closing of the former cathedral was emotional for him and for the parishioners and visitors present. “It felt like we were attending the death of our mother. In an analogous way, we were,” he said. “It was the end of the mother church of the Diocese and the end of a period in Vermont Church history. … As a mother church, Immaculate Conception Church provided sacramental life until she could no longer sustain life within herself.”

The most difficult moments for him occurred at the end of the Mass when he said the final prayers at the altar, the baptismal font, the 14th station of the cross, the confessional, the statue of Our Lady of the Immaculate Conception and the ambo. “Removing the Blessed Sacrament from the church forever and locking the doors to the chapel will be forever ingrained into the collective memory of all who were present,” he said.