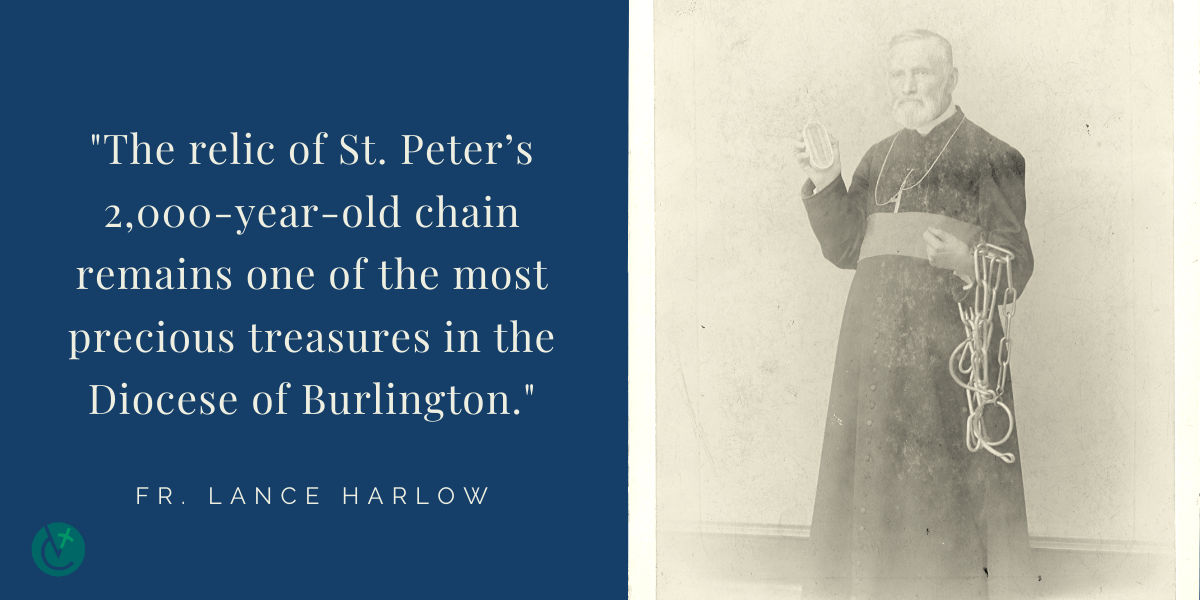 On Aug. 5, 1894, a procession made its way through the streets of Burlington, the likes of which had never been seen before or after. Bishop Louis de Goesbriand himself described it as “another Pentecost.” Men and women, clergy and laity, gathered at the Mass along with St. Peter the Apostle “in spirit” through the presence of a relic; the central focus of the procession was a link and a facsimile of the chain which had bound St. Peter for nine months in the Mamertine prison in Rome.

The procession itself was preceded by a solemn Pontifical Mass celebrated by Archbishop Michael Corrigan of New York. During the homily, Bishop Denis Bradley of the Diocese of Manchester, New Hampshire, stated proudly: “In becoming the possessor of [the link], the esteemed prelate [Bishop de Goesbriand] and his Diocese have been favored as no individual or locality in this Western Hemisphere has hitherto been favored, inasmuch as no portion of the chain of St. Peter had previously found its way within the limits of this American continent.”

In other words, the Diocese of Burlington is the only church in the United States to have this relic. It is all due to Bishop de Goesbriand’s “audacious” faith, as he describes it, to approach Pope Leo XIII and ask him for one of the links of the chain. There were only seven links in total making up the chain, and the Holy Father was reluctant to take it apart. Bishop de Goesbriand persisted saying that the link would allow the American people to grow in a greater love of St. Peter and his successors, including Leo XIII. It worked.

At 5 p.m. on Aug. 5, the procession began at the corner of North Winooski Avenue and Cherry Street, then from North Street to North Champlain Street and then back to the cathedral on Cherry Street. Thousands of people lined the streets to watch. Four priests carried the reliquary containing the facsimile chain on their shoulders. They were followed by Bishop de Goesbriand kneeling on a prie-dieu in an open carriage holding in his hands a smaller reliquary with the actual link that had touched St. Peter’s body. Afterward, the relics were placed in the large reliquary at the Cathedral of the Immaculate Conception.

At the end of the day, Bishop de Goesbriand consecrated the Diocese to St. Peter with an Act of Consecration. It reads in part: “Blessed Peter, Prince of Apostles, look down from on high upon this Diocese which consecrates itself to thee at the hands of its first bishop; but especially upon this city and upon this congregation which possesses the most glorious memorials of thy chains in the prisons of Rome and Jerusalem.”

The relic of St. Peter’s 2,000-year-old chain remains one of the most precious treasures in the Diocese of Burlington and in the United States. Since Bishop de Goesbriand’s death 120 years ago there have been 11 successors of St. Peter from the time of Pope Leo XIII to Pope Francis. Thanks to our “audacious” first bishop’s love for the Office of Peter, we have been the recipients of numerous graces through St. Peter’s intercession.

—Originally pubished in the Winter 2019 issue of Vermont Catholic magazine.