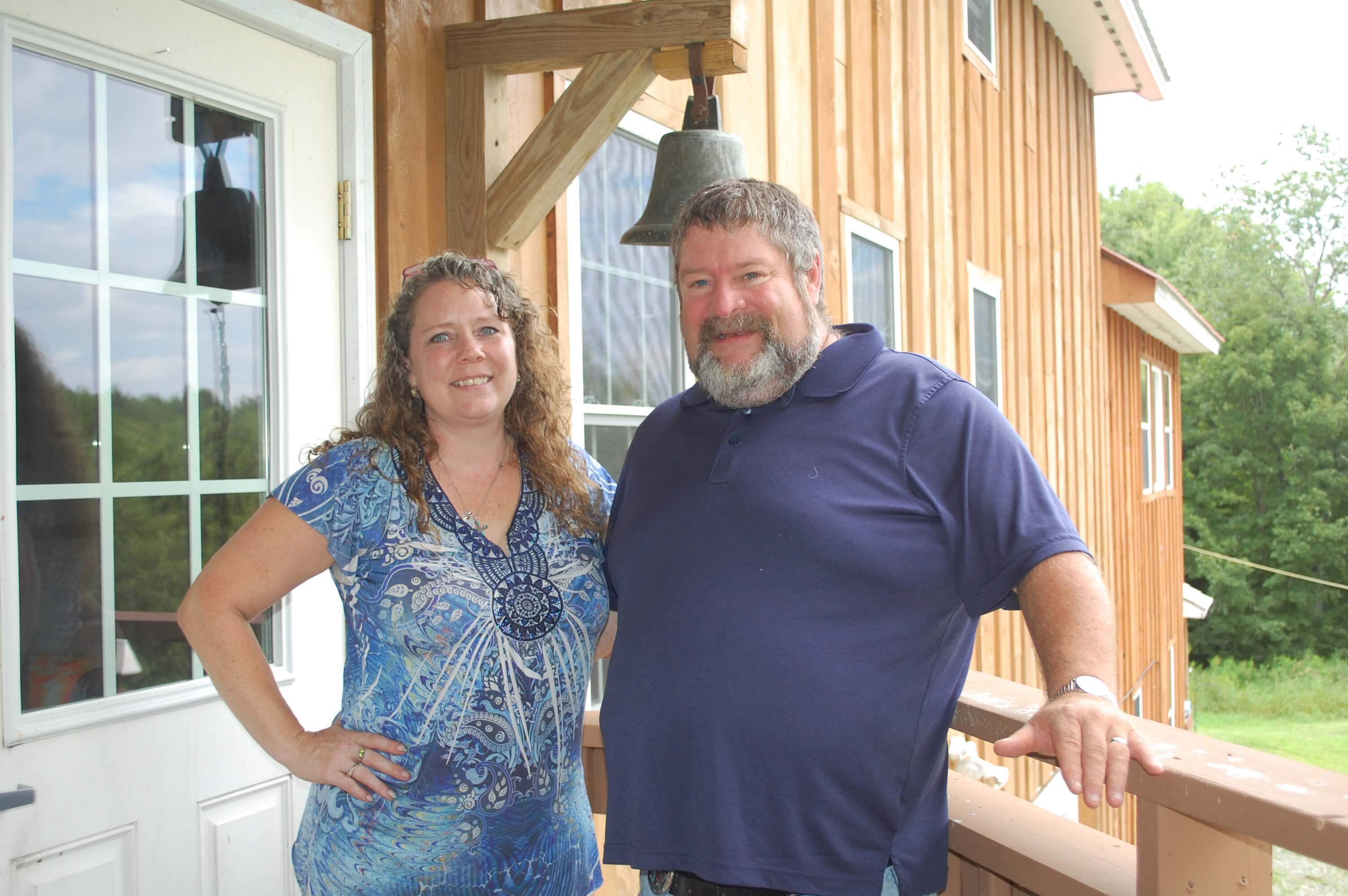 Photo Credit: Vermont Catholic/Cori Fugere Urban - Dave Dumaine and his wife, Terrie, are the owners of The Dumaine House retreat center in Jacksonville and parishioners of Our Lady of Fatima Church in Wilmington.

That’s not to say it hasn’t been tried, sometimes with emotion and with force.

Dumaine and his wife, Terrie, are the owners of The Dumaine House retreat center in Jacksonville and parishioners of Our Lady of Fatima Church in Wilmington. They are parents of four adult children and have two grandchildren.

Dumaine has earned himself a reputation as an effective youth minister in Vermont and beyond who uses his musical talent, storytelling ability and good humor to bring young people closer to God.

After Catholic high school, Dumaine earned an associate’s degree in culinary arts from Johnson and Wales University in Providence and worked as a cook. When he took a deep look at his life, he decided to join the LaSalette Missionaries as a religious brother and serve as a cook for the religious community.

As a cook at the LaSalette Shrine in Attleboro, Massachusetts, he met many young people on retreat there; some would seek him out in the kitchen where he had music playing and enjoyed joking.

Eventually he took over a youth ministry program at the shrine, and because his superior identified his gift for working with young people, he was sent to study religion first at the University of Massachusetts in Boston then to The Catholic University of America in Washington, D.C., from which he earned a bachelor’s degree in religious studies and a master’s in religious education.

While in the nation’s capital, Dumaine worked with the Missionaries of Charity, ministering to AIDS patients at Gift of Peace House. It was there that he began to get angry with God because of the suffering he witnessed.

He was the sponsor for one patient, Mike, when he became Catholic, and when Mike died, Dumaine was at his “wits end.”

Soon 8-year-old Tina died. He used to rock her to sleep when she was in extreme pain.

One night she asked him to sing “Amazing Grace,” and when he got to the part about “a wretch like me,” he “lost it,” he recalled as he and his wife spoke with a visitor on the expansive porch of the rural retreat house. “All I could think of was how much of a wretch I was.”

He had what seemed like everything — family, friends, education. She didn’t even have a mother; hers had died of AIDS. Yet the child was full of love.

A voice in Dumaine’s heart came like a whisper, “I’m always with you.” He thought, “I’m hearing voices. I thought I was crazy,” he said. Then he saw Tina’s face in his mind’s eye, her brown eyes looking up at him. “Dave, God love me. Because of you I know that God loves me,” is what she communicated to him.

So Dumaine decided from then on to try his best to show and talk about God’s love, the kind of love that is giving without expecting anything in return.

“Brother Dave” took perpetual vows in 1992 and became director of youth retreats and assistant director of the shrine in Attleboro, and he was instrumental in bringing Steubenville East youth conference there. “My love for youth ministry grew,” he said, and he wanted to put his entire focus on working with youth and making a difference in their lives.

But when he was nominated for the order’s provincial council, the thought of changing to work in administration lead him to discern out of religious life, and he went to work as a full-time youth minister in nearby Seekonk, Massachusetts.

He had worked in youth ministry at the shrine with his future wife, and their friendship developed after he left religious life. They were married in 1998.

As members of New England Catholic Youth Ministry, they met Deacon Paul and Helene Mello of The Mellos retreat center in Jacksonville, and their friendship evolved; the Dumaines eventually purchased the retreat house and moved from Norton, Massachusetts, to Jacksonville in 2004.

Three years later an electrical fire destroyed the retreat center. “We lost our work. We lost our home. It was very, very trying,” Mrs. Dumaine said.

It was an astronomical feat to rebuild, and the family was buoyed to receive support and contributions for the project. One boy gave them 86 cents — all the money he had. A friend donated $10,000 from his foundation. And there were many other contributions including construction help from teens who had been on retreat there.

The center reopened in 2008 and now includes eight bedrooms for guests and a chapel.

“Everyone struggles,” Dumaine said. “I go through dark times like everybody else.”

But his wife helps him to believe more in miracles, and “he helps me see God is always constant,” she said.

To learn more about The Dumaine House, go to dumainehouse.com.