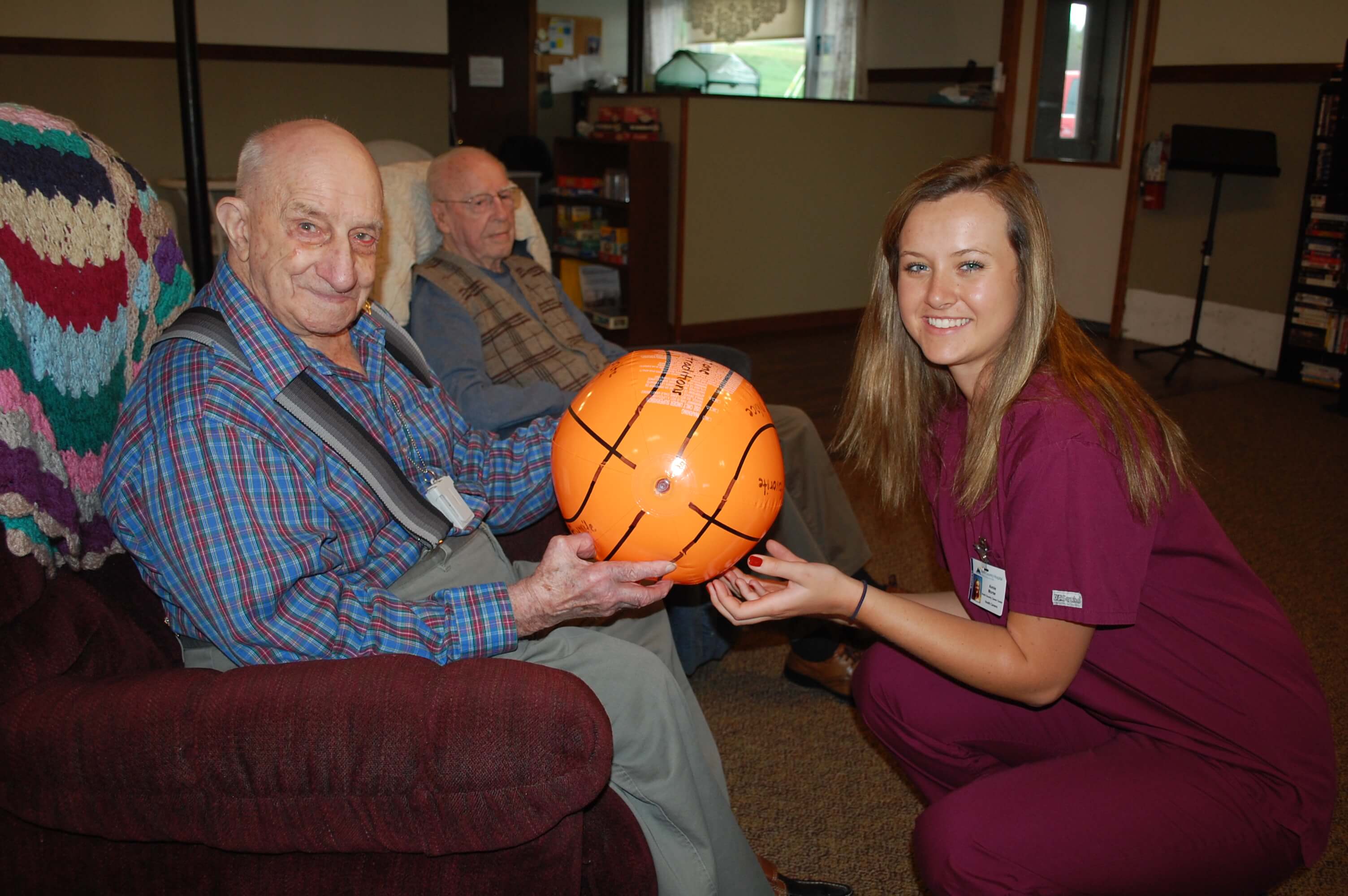 Donald Farrar, a resident of Michaud Memorial Manor in Derby Line, sat in an easy chair and caught an orange blow-up ball, decorated to look like a basketball and bearing a variety of questions hand-written in black marker. His thumb landed on the question, “What is your favorite season?”

“Winter, because of [ice] fishing and skiing,” he replied. “And summer for playing ball.”

The question ball was one of the games residents at the elder care home run by Vermont Catholic Charities Inc. played with students from Newport’s North Country Career Center human growth and development class who, along with participants in the Skills USA group, frequently visit Michaud Manor.

On May 10 eight seniors from the human growth and development class and their teacher, Celine Champine, brought activities they had created for the residents.

Not only were they fun, they stimulated conversation. Riley Laffoon made a box with a mystery object inside for residents to feel without seeing it and guess what it was. Resident Maurice Labor’s item was a pinecone. “Did you used to play in the woods?” Riley asked. “I love pine cones. They are just so pretty.”

Resident Sandy LeBlanc is delighted the students visit because “it’s nice to have young blood here.”

In addition to games and conversation, the students do crafts and puzzles with residents and even threw them a prom in March, complete with corsages, boutonnieres and hats. Residents got dressed up for the occasion and had photographs taken in front of a special backdrop. “Everybody had a wonderful time. It was very festive,” said Mary Beth Medwid, activities director.

It was she who made the first contact with the career center, asking about four years ago for students to help residents with computer skills. “We tried to meet the needs of students and residents, and it morphed into a really good relationship,” Champine said, noting that she seeks to give her students real life experience in a health care setting.

“It’s a special relationship that has grown between the residents and the students,” said Michaud Manor Administrator Anne Steinberg.

Students Melodee Martin likes to hear residents’ stories about their lives, in particular the stories one told of travels to Ireland. “I’m only 18 and haven’t experienced that much at all,” she said.

Laffoon appreciates learning from the residents. “We’re learning about life from childhood to adulthood from people who have experienced the world,” she said.