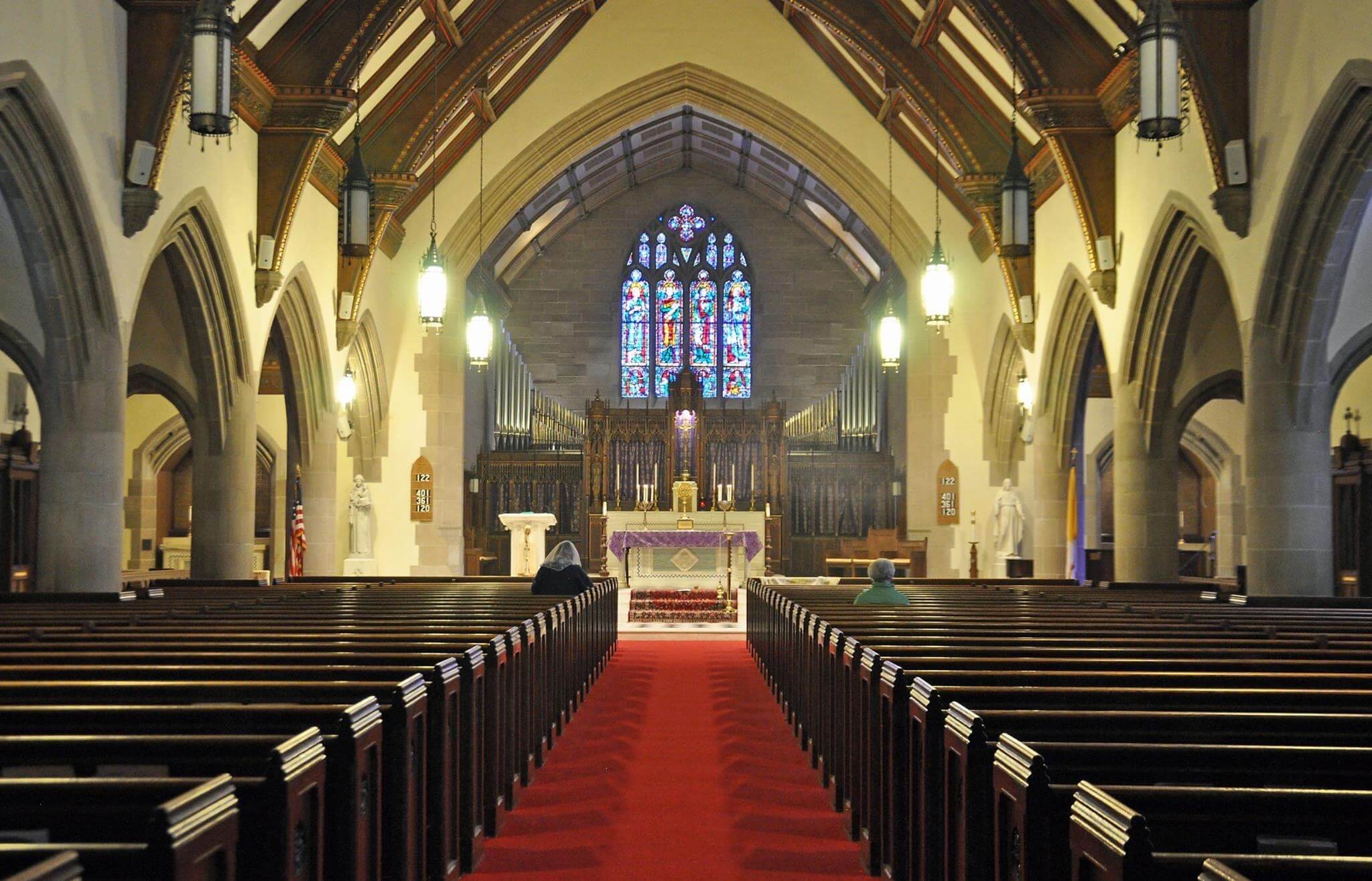 Photo Credit: submitted - The interior of Christ the King Church in Rutland

“Necessity is the mother of invention” is a phrase that describes Msgr. Bernard Bourgeois’ efforts to create novel solutions to challenges posed during the novel coronavirus pandemic. “It was the only way to reach people, and I wanted to do my best in reaching our people,” said the pastor of the Rutland-Wallingford Catholic Community. “For me, ministry moved online.”

When churches were closed to the public celebration of the sacraments and to other gatherings, Msgr. Bourgeois initiated a host of online activities to stay engaged with parishioners of Christ the King and Immaculate Heart of Mary churches in Rutland and St. Patrick Church in Wallingford. Some of these initiatives continue even as Vermont continues to open up.

Mass was available online from the end of March through the end of May, daily and Sunday. “Once we got rolling and tested it a bit, we used Facebook Live for the live broadcast and then left it on Facebook,” Msgr. Bourgeois explained. A link from Facebook to the parish website was added for those who don’t use Facebook; one Mass on Sunday morning is live-streamed on Facebook.

During the Sacred Triduum, he live-streamed Holy Thursday Mass, Good Friday Service of the Passion, the Easter Vigil Mass and Easter Sunday morning Mass with hundreds of viewers for each.

During Lent, using YouTube, he taped himself praying at each Station of the Cross with meditations he wrote, mostly around the pandemic and how that drew people into the passion, death and resurrection of Christ. “I taped one station a day for 14 days. Quite popular,” he said.

During Holy Week and the Easter Season, he taped himself on Facebook praying evening prayer each weeknight. It took about 15 minutes, and he gave a reflection with it. He timed it so that at the end of prayer could be heard the chimes of Christ the King Church, which plays a hymn daily at 5:15 p.m.

During Lent and Easter, a Wednesday evening virtual holy hour was offered in which Msgr. Bourgeois exposed the Blessed Sacrament and focused the camera on it.

In the Easter season, he taught a series on baptism and its effects and included silent time and benediction.

He began an informal virtual gathering on Saturday mornings called “Coffee Hour” in which he went live on Facebook and asked people to send in questions or topics for him to address. The link to that is posted to the website; he is still doing this.

“People were very happy” with the programming, he said. “There was a breadth of programming so everyone could find something they could engage in.” Hundreds of people tuned in for the daily Masses and for the Stations of the Cross and the evening prayer. “Frankly, it humbled me a bit,” he continued. “So many people were hungering for their faith. So we found a way to make it happen.”

He used his cell phone and later a microphone that helped with the sound.

Steve Seigfried of Christ the King Church, filmed Sunday Masses and resumed his role as lector for one Mass. While filming, he saw the number of parishioners who were viewing the Mass and read their comments, “which were generally positive and often engaging,” he said.

On the first Sunday he was asked to film the Mass, he said he wasn’t prepared for the wave of emotion that came as he walked into the sanctuary of Christ the King Church: “It was an amazing feeling to be back in church again.”

Dr. Christina Bordeau of Christ the King Church watched many of Msgr. Bourgeois’ online offerings as well as Saints & Symbols by Father Matthew Rensch, parochial vicar. “The programs allowed for the expansion of Jesus’ message beyond the Rutland Region and maintained the burning of the spiritual flame throughout the pandemic,” she said.

Msgr. Bourgeois’ leadership “influences, leads and guides all to a deeper relationship to Christ,” said Christ the King parishioner Peggy Stanley who participated in numerous virtual programs. “His gifts of teaching, writing and preaching are helping to form us in the Catholic faith and love for Jesus Christ. … He was friendly, with engaging smile, answering questions, concerns and accepting many expressing gratitude.”

Sunday morning Mass continues to be online for those who don’t feel ready to return to church. “I stopped everything else except the coffee hours as those are very popular,” Msgr. Bourgeois said. “It’s my one-hour live show each Saturday morning.”

He may reintroduce evening prayer seasonally or on certain feasts.

Seigfried hopes the online Masses will continue well beyond the pandemic. “Although Sunday Masses are available on EWTN, it is comforting to see one’s own church, to hear its organ and to hear the message of one’s own priest,” he said.

“I have to admit that I enjoyed the challenge of moving online and keeping in touch with parishioners. We had plenty of time,” Msgr. Bourgeois said. “Getting in front of a camera each day for Mass and then for evening prayer kept me engaged in ministry. Frankly, I can’t imagine what my life would have been like without it. There was a special feeling in knowing that so many people were in their homes tuned into what we were doing here live. I would say that the altar extended into their homes, hearts and lives.”

Bordeau said the churches are blessed to have Msgr. Bourgeois as their pastor: “With over 20 years of leadership experience, [his] greatest gift to us is the love and transformational leadership that he brings to the Rutland-Wallingford Catholic Community. He passionately exhibits his leadership abilities through innovative online platforms, and most importantly, is there to counsel and console whenever a parishioner needs him.”

Seigfried said Msgr. Bourgeois is a strong leader and an excellent orator: “Bringing his Sunday Masses into our homes was a godsend for many during these difficult times. … Engaging in our faith was a terrific way to work through a difficult time.”