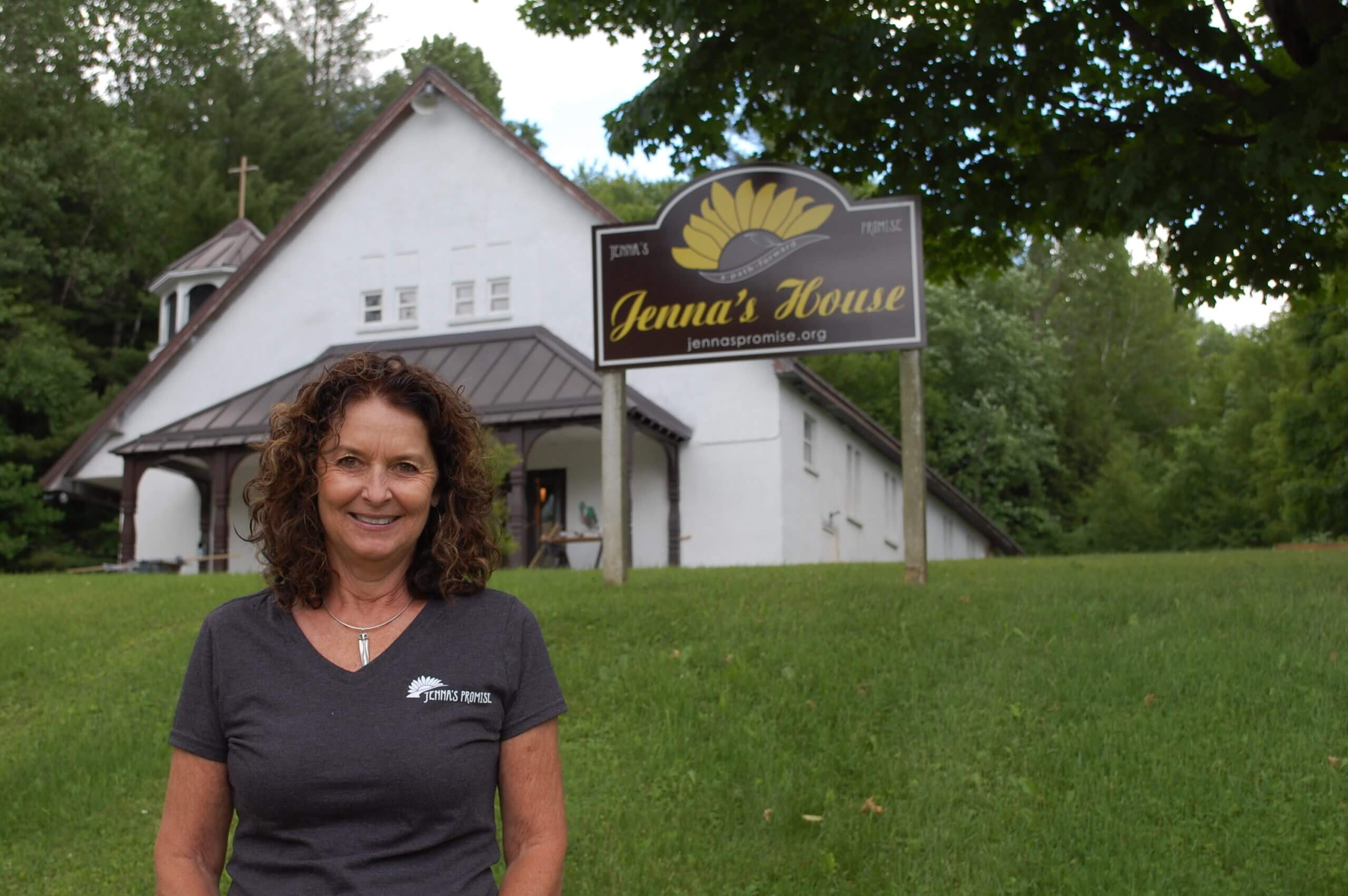 When Dawn Tatro and her husband, Greg, walked out the front door of St. John Church in Johnson on their wedding day in 1986, they were greeted by a rainbow, a symbol of promise.

Little could she have imagined then that she and her husband would one day buy the former church and base there “Jenna’s Promise,” a non-profit organization they founded in memory of their daughter, Jenna, that helps persons suffering from substance use disorder.

Jenna, who was baptized, made her First Communion and was an altar server at St. John’s, overdosed on fentanyl in 2019.

Her parents purchased the 1940’s-era church building later that year to continue their daughter’s work of helping others with substance use disorder.

The pews in what had been the hilltop church’s worship space are gone, replaced with tables and chairs for meetings, events and fundraisers — used for both persons in recovery and by the local community. Jenna’s Promise in partnering with North Central Vermont Recovery Center that will occupy the lower level that had once been a parish hall for its programs and facilities that will include a gym, kitchen, children’s play space, meeting rooms and offices.

The grand opening is scheduled for Aug. 14.

The former church is now called Jenna’s House, and the Jenna’s Promise umbrella organization also includes Rae of Hope, a sober home in Johnson for women with substance use disorder and/or victims of psychological trauma; and JP Goods, a discount store in Johnson where those in recovery can work.

Funding for Jenna’s Promise comes from the Tatros, grants, fund raising and individual donations. Its mission is to create a network of support that will help people suffering from substance use disorder to recovery and independent living.

Its goals are to provide healing, create hope and enhance community.

Born in 1992, the second of the Tatros’ two children, Jenna was a free spirit who lived life to the fullest. She graduated from The Bishop John A. Marshall School in Morrisville and planned to pursue a career in the medical field so she could help people. She liked to play soccer, ski, snowboard, play the piano and write. She rode horses competitively. She loved being an aunt.

Smart, beautiful and with a bright smile, she was a student at Johnson State University when one Christmas someone she knew beat her, and she landed in the emergency room where she was prescribed 30 days of oxycontin, though, as her mother said, “she had no broken bones, just a broken heart.”

Jenna never went back to college; drugs ended up “owning her,” her mother said, and Jenna spent six years in and out of rehab, often outside Vermont where programs were available.

While in rehab, Jenna “helped so many people,” Mrs. Tatro said. Sometimes she’d ask her parents for money to help another sober house resident. She’d sit with people who were suffering, listen to them, share her blanket. “She wanted to fundraise and educate people about this disease to help others who did not have the resources she did,” Mrs. Tatro said. “That was Jenna’s promise, and we kept it going.”

After the closing of St. John’s, Mr. and Mrs. Tatro — president and CFO, respectively, of GW Tatro Construction in Johnson — joined Most Holy Name of Jesus Parish in Morrisville. It was her faith that helped her during Jenna’s illness and death, and now, she said, God is using her and her husband to help others.

Jenna’s Promise is her purpose, and each day she asks God to give her wisdom and show her what she can do to make a difference in people’s lives; she has helped more than 100 people get into sober living situations.

“If I didn’t love Jesus so much going through this pain, I could never have done all this,” Mrs. Tatro said.

The Tatros “are wonderful people and doing such needed work,” said Father Jon Schnobrich, pastor of Most Holy Name of Jesus Parish and of Stowe’s Blessed Sacrament Parish.

Mrs. Tatro recalled a homily he once gave, saying that God the Father’s greatest joy is His Son, and in giving Jesus to the world, His plan was not to condemn or shame humanity for its sin and disobedience, but to save it. “Dawn and Greg lost the joy of their daughter to addiction but through faith have come to see how God can bring good from evil and life from death.  From the loss of Jenna to addiction, through the pain of burying a child, the Lord has moved them to reach out in support and love to those whose lives are touched by addiction,” Father Schnobrich said. “By baptism, we are inserted into the paschal mystery of Jesus Christ, and from that moment on our life is not our own and not about us. I see this great work coming from Jenna’s death as a way the Tatros are living the mystery of Christ’s life, death and resurrection.”

As they carry on Jenna’s promise to help persons suffering from substance abuse disorder, Mrs. Tatro recognizes that there is something about the former church situated on three acres that is healing. “People say when they walk out, they have hope,” she said. “People leave from meetings here saying they feel hope.”

She believes she will be reunited with her daughter in heaven, and Jenna will greet her with outstretched arms and say, “Mom, you did good.”

For more information, go to jennaspromise.org.